Almost instantly upon release, Darwyn Cooke’s mini-series The New Frontier became a classic of the superhero genre. So when a couple of years ago Warner Home Video opted to develop it into a direct-to-DVD movie, fan reaction was, to say the least, excited.

Now after a long wait, the animated adaptation is here. And the good news is that it works.

Set in a DC Universe without multiple Earths, Justice League: The New Frontier covers the formation of the super team if there had not been retroactive continuity. The Justice Society has disbanded; only Superman, Batman and Wonder Woman remain in the public eye, with different uneasy relationships with the government. 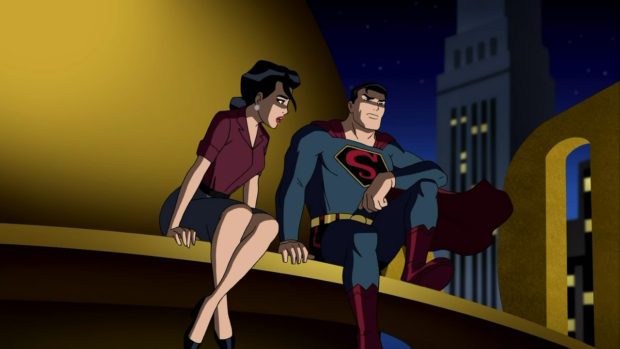 The movie tells the parallel stories of pilot Hal Jordan (David Boreanaz) and the Martian J’onn J’onnz (Miguel Ferrer). Emphasize those “secret” identities, because this really is about those sides of the characters, not about the more mainstream superheroes they would become. The Flash (Neil Patrick Harris) runs around and plays an integral part, but it takes a back seat to the other two heroes’ journeys.

It’s a tale of cold war paranoia, with that fear aimed towards the appearance of the Martian. What no one knows is that an ancient entity calling itself The Centre (Keith David) fears mankind more than anything else, and plans on wiping humanity off the face of the planet.

Stan Berkowitz’s screenplay captures the essence of Cooke’s original work. Certainly some things had to be cut for time, but Berkowitz and director Dave Bullock manage to still reference a lot of them. Will it mean much to a new audience to see a passing reference to the doomed hero John Henry? Maybe not, but that really is a tragic story unto itself, as well as the fate of The Losers. 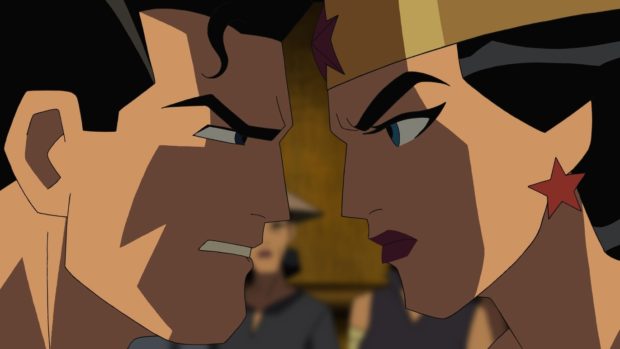 Streamlined and fast-paced, the movie still feels believably set in the fifties, from the production design to Kevin Manthei’s space age bachelor pad score. In particular, the opening titles set the tone, matched by an end played out to John F. Kennedy’s “new frontier” speech.

As always, voice director Andrea Romano has found a perfect cast which meshes well with Bullock’s stylization under the watchful eye of executive producer Bruce Timm. A sign of good animation characterization is when an actor gets credit for a performance based on the art, andJustice League: The New Frontier teems with such moments. Brooke Shields dissolves into the role of Carol Ferris, Kyle MacLachlan should just be Superman and surprisingly, Jeremy Sisto makes a good but cynical Batman. 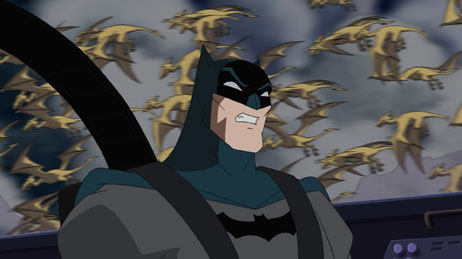 It flows, but if the film has a weakness, it would be that both it and its source material assume you have a familiarity with many of the characters already. That’s not a problem with Superman or even the Martian Manhunter, but the moment that Hal Jordan uses the ring may make non-readers (are they watching?) scratch their heads as some mysterious cameos appear. On the other hand, it’s strangely entertaining that Adam Strange just shows up, never speaks, never gets explained but fights like hell against The Centre. 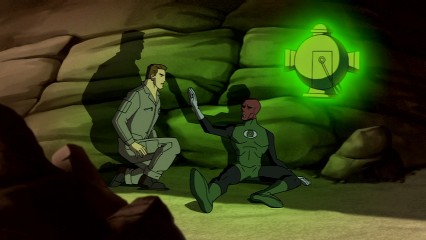 The disc comes with two different commentaries, and to be honest, I haven’t listened to them yet. But I will, if only to hear Cooke talk about his vision come to life and Timm being brutally honest about the work.

Instead, I spent time watching the documentaries on the history of the Justice League (and Justice Society), the villains and the creation of the original work. Warner Home Video really packs these things with fascinating extras, though hard-core fans probably didn’t need the extra episodes of Justice League Unlimited, though they all touch thematically on the same ideas expressed in Justice League: The New Frontier.

The film does deserve its PG-13 rating, being too violent at times and perhaps too complex in its morality with characters like King Faraday (Phil Morris). Yet the script also straightens that out, and stands firm in its belief that heroes do stand for something. One speech Faraday delivers also resonates pretty strongly in these times; it’s nice to see someone stand up for justice, even if he is animated.