The more and more I think about it, Kick-Ass was made for me. Or fans like me, maybe.

I mean, I love superhero movies, and I love balls to the wall action movies with whizzing bullets and galvanizing gunplay even more. Throw in some cool, fun characters, some crazy, nuanced performances and a slick directorial style and I’m in for sure. Kick-Ass delivers all this and more and pretty much turns the superhero genre on its head and gives it a spanking. It’s pretty much Spider-Man meets John Woo and I can’t help saying it, it kicks ASS!

Based on the Mark Millar and John Romita Jr. created comic of the same name, Kick-Ass is brought to the screen by Layer Cake and Stardust auteur Matthew Vaughn. The source material was one of the most crazy and violent comics in recent memory and became infamous for its raw, realistic, vibe and insane bloodletting…and of course, the nine year old assassin with the mouth of a sailor. Luckily Vaughn, along with co-screenwriter Jane Goldman, stayed faithful to the spirit of the comic book and deliver a nose busting, knife throwing, gun blast of a party. 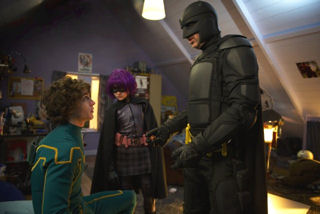 Kick-Ass is the story of Dave Lizewski (Aaron Johnson), a high school fanboy who wonders why nobody in the real world has ever tried to be a superhero. Like any good nerd, he’s awkward and shy, can’t get the girl, and hangs out with his nerdy friends at the comic shop. One day, he’s pushed too far and Dave’s daydreams about becoming a costumed hero take over and soon after, Kick-Ass is born.

Leave it to a kid with an overactive imagination and one living in today’s world to name his costumed alter ego Kick-Ass and not something more comic-based like Street Avenger, The Revenger or Fight Man. The kid has a kick-ass idea and names his hero Kick-Ass. And Kick-Ass is hip like that.

One of the first things you really get a feel for in this movie is how hip it really is. This is a film made for today’s mindset. This isn’t a Marvel movie about a Stan Lee creation that hearkens back to the morals and standards of yesterday.

This is a film based in the world we live in now – a time when crime is brutal and real. Criminals aren’t all about robbing banks and taking over the world, they’re about taking advantage of the weak, pouncing on the unprotected and most of the time, doing it while others just look away. At times, it’s hopeless. 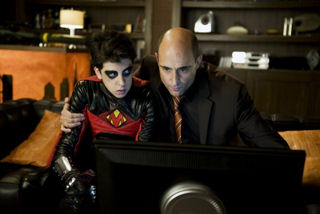 What Kick-Ass captures, in a weird and twisted way, is that all it takes is one person to stand up to the oppression of crime. One person can inspire hope. Even if it means they’ve got to get their ass kicked and broken in many places to do so. And in today’s world, hope spreads so much faster with the help of social media like YouTube, Twitter and MySpace. Or so we learn in Kick-Ass.

After a video of Kick-Ass taking a beating saving a young punk’s hide blows up on YouTube, he finds that he’s not only inspired the city, but other costumed crime fighters as well. On a mission to deliver a stern message to a neighborhood tough, Kick-Ass meets nine year old bad ass, Hit Girl (Chloë Grace Moretz) and Batman look-a-like Big Daddy (Nicolas Cage). However, when the newcomers’ ways are a tad more permanent than what Kick-Ass had in mind, a career change is suddenly contemplated.

But Kick-Ass isn’t only getting positive attention. He’s also garnered the attention of the local crime boss Frank D’Amico (Mark Strong) and another costumed vigilante called the Red Mist (Christopher Mintz-Plasse). What follows could be your typical “Coming of Age” super hero quest, but in the hands of Vaughn, Kick-Ass becomes a crowd-pleasing gut punch that makes you wince, grimace and cheer.

So how does the film live up to the comic and will fans of the comic be fans of the movie? Well, there are three key plot differences from the comic that aren’t in the film which could be initially disappointing, but afterwards aren’t. (And I’m not going to spoil them.)

What matters here is that what’s on screen is the heart of what made the comic cool. Kick-Ass is a winner because it’s fun. Dirty, violent, oh so totally wrong fun. And like the Kick-Ass comic, the film keeps pushing it over the top, over and over again.

For instance – Our first introduction to Hit Girl and Big Daddy is when papa Macready (Cage) is prepping little Mindy (Moretz) for a gunshot to her bullet proof vest at close range. Dad quizzes her about the bullet’s velocity and she bargains some ice cream out of it and family bonding will never be the same again. When Kick-Ass and Red Mist team up in the “Mist Mobile” and they cruise the city streets, bobbing their head to Gnarls Barkley’s “Crazy,” you realize that these are just kids wearing costumes and not superheroes.

Coolest of all, Kick-Ass has a cohesive story and is easy to follow. Told with a Spider-Man-like narrative, the story plays a lot like Sam Raimi’s webslinger tales except with an R rating. And the cast is pretty cool as well with a lot to like. Johnson is amazing. Playing the likable loser, Brit Johnson’s American accent is flawless and the sheer fear and physicality he conveys is honest and real. He would be the breakout star of the film if it wasn’t for Chloë Grace Moretz. 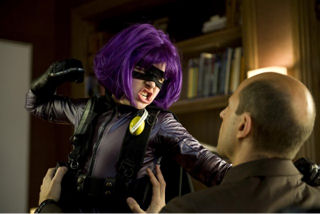 In this film, almost like in the comic, Hit Girl steals the show. Moretz’s twelve-year-old vigilante is so much fun and her performance is a powerhouse. The girl shows wisdom well beyond her years and her delivery is smooth and flawless. From the way she teases her Daddy with surprise birthday wishes to the way she disposes of gang bangers, Hit Girl does the most ass-kicking in Kick-Ass. She’s sure to inspire a lot of Grrl Power, much like the Power Puff Girls did years back. Except with an R rating…

The supporting cast is fun, too. Cage is awesome as the geeky, yet purposed Big Daddy. Listen closely to his dialogue when he’s got his costume on for an Adam West-like delivery. Chris Mintz-Plasse is cool as Red Mist and is ever so surely shedding the McLovin persona he was once known for. Teen Movie stalwart, Clark Duke is solid as Dave’s friend Marty, bringing a whole lot of teen cred. The apple of Dave’s eye, Katie – played by the lovely Lyndsy Fonseca — is super hot and provides the sexual tension needed to make a successful teen flick.

And successful it is. Kick-Ass is a strong film that is sure to appeal to all the fanboys and fangirls as well as the pre-teens, the teens and all those in between. Fans of the comic need to not cling so closely to the book so that they don’t have fun with the film. People coming in without knowing anything about the property just need to sit down, strap in and prepare to have their asses kicked.

Like a bullet to your bullet-proof vest, Kick-Ass will beat you senseless with gasp out loud action, gutbusting comedy and kids that can’t fly or see through walls but could kick your ass. It’s a winner. 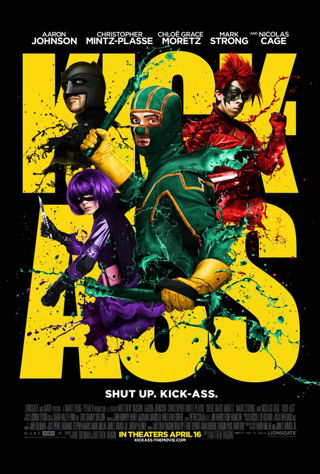