When Adam West started in narrating the opening of Powerless, I had a strange hope that somehow he would be revealed to be an elderly Bruce Wayne, retired from the superhero game but still trying to protect the citizens of Gotham City. Or Charm City, which is nearby, and where Wayne Tech has its research division.

By the time the pilot episode had ended, however, it seems like that hope is not to be, but it didn’t matter. The sitcom that messes with DC continuity found a way to fit itself back in there — if you want it to, and is happily, brilliantly unapologetic about existing in a world filled with superheroes straight out of the comics. It’s not bending backwards to make them realistic; this is a comic book world, and it’s silly in all the right ways.

A good sitcom relies on a strong ensemble, and Powerless has some of the best comic actors it could ask for, revolving around a magnetic straightwoman in Vanessa Hudgens. She stars as Emily Locke, a small town girl from (superhero) flyover country who’s moved to the big city to make something of herself. Excited to see superheroes in a city where everyone else has gotten way over it, Hudgens has the somewhat thankless job of just being perky — for now. But somebody has to be our way in to the rest of the team. 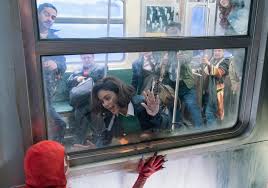 She has to stay optimistic against Van Wayne (Alan Tudyk), Bruce Wayne’s “exiled” cousin, who could be the next Lex Luthor, or at least Morgan Edge, if it weren’t for his conviction that because he’s a Wayne, he really doesn’t need to try. (A few of his lines land a little too sharply this week.) Tudyk is one of the best character actors around, mainly because he always brings a different character to the table. Van is smug, coddled, and drunk, and his vaguely threatening indifference is going to be a high point in each episode.

Working under Emily are Teddy (Danny Pudi), an inventor who has a strange fascination for the aesthetics of his devices, and Ron (Ron Funches), a technician in charge of “child-like wonder.” They play off each other well, and like Tudyk, they bring distinctive rhythms that spin lines from clever to bizarrely funny. 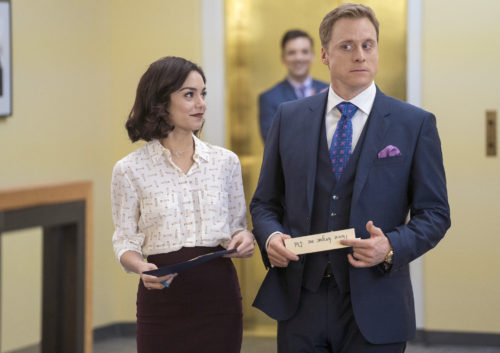 The best actual inventor seems to be Wendy (Jennie Pierson), bitter and determined to just punch the clock. All of the tech team react poorly to Emily because she’s just another in a long line of supervisors who they think will be gone before they learn her name.

As pilots go, it’s not terribly unpredictable. But it also reminds me of the quirky gone-too-soon Better Off Ted, while also throwing enough nods to the DC Universe to feed comics fans in other ways. Yes, you’ve seen commercials with Starro, though most superheroics will be in the background. It looks like at least the first few episodes will tangentially deal with a rivalry between Crimson Fox (Atlin Mitchell) and Jack O’Lantern (Kimani Ray Smith), both of whom only barely resemble their comic book versions. But… Starro. Come on!

I was skeptical, and I’m not exactly powerless to resist this show, but I want to see more. It’s not quite there yet, but this could become a favorite if it’s given time to breathe.