Ready Player One is an ode to what is pop/geek culture for the 80’s and 90’s, Ernest Cline’s novel has been quoted as a “nerdgasm of a novel.” It is only fitting that the one man who has been one of the biggest influencer of those generations, Steven Spielberg, directs the film.

In what may be the most live action CGI packed live action film in the history of cinema, Spielberg tells the story of Wade Watts (a bland Tye Sheridan) in the year 2045, where society has disconnected itself from each other, and most people find sanctity in the Oasis. The Oasis is a digital paradise, created by James Halliday (recent frequent Spielberg collaborator, Mark Rylance). After Halliday’s death, his avatar revealed the existence of a series of Easter eggs, the discovery of which would give the winner control of the Oasis.

As Parzival, Wade’s avatar, teams with Art3mis (Olivia Cooke) and his other friends from the Oasis (who all coincidentally, in this unlimited universe, all live in Columbus, Ohio?) combine forces to find the Easter eggs, they are being thwarted by IOI and Nelson Sorrento (Ben Mendelsohn). IOI wants control of the Oasis for their own financial purposes.

The two most watchable actors in the film are drowned out by their roles. Mendelsohn is a caricature of what it means to be a bad guy and Rylance simply isn’t in the film long enough to make that much of an emotional impact. Indeed, one of the morals of the story is VR is simply not as great as real life and real human connections, not just connections coming from a computer. Yet I found myself laboring through the scenes where they weren’t in the Oasis as I wanted the filmmakers to depart reality and go back to virtual reality. 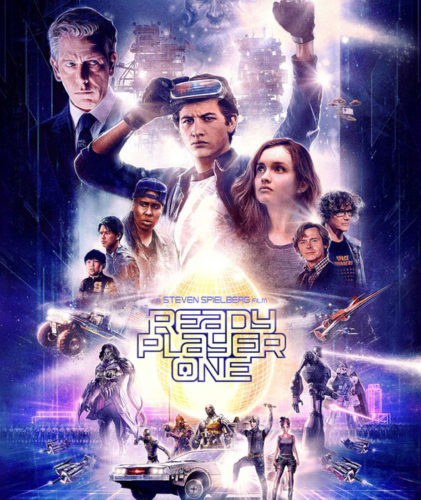 The real highlight of the film is nostalgia. Tribute is made to departed Spielberg colleagues in Stanley Kubrick and John Hughes as well as a dedication to Speilberg collaborator Robert Zemickes in the form of a DeLorean from Back to The Future. Other pop culture goodies include Jaws, Jurassic Park, King Kong  and The Iron Giant. While the film’s plot is predictable, unsung hero saves the world and gets the girl, it is the visual imagery of the film that make the film worth seeing in cinemas.

Overall Ready Player One  is not a film that is going to at the top of Steven Spielberg’s filmography, and that is more of a compliment to the depth and talent of Spielberg. Ready Player One  will be sure to entertain as audiences reminiscence over the pop culture references and an entertaining enough visual story, but won’t stay with you long after you leave.