It’s not the fault of anybody at DC Comics. It’s not the fault of the creative team involved in Robin War. But when I finally got a chance to open the book today, I was startled at the image of a young boy dressed as Robin — one of those from We Are Robin – pointing a gun at my face. It was meant to be a provocative image, to get my attention, and it worked. But because of the day this book was released, it got my attention in the wrong way. I almost put the book right back down, and for a split second, wanted to just throw it away.

Clearly, the story isn’t meant to be in favor of children handling guns. In the aftermath of the opening sequence, various citizens of Gotham argue about how Batman has training, these kids don’t, and… a Robin shouldn’t have a gun anyway. Even Damien Wayne takes out his frustration on the urban teens who have formed “Robin cells,” lecturing them that they need training. They can’t just take the law into their own hands.

And that kid with the gun? He shouldn’t even be wearing a Robin mask, because he has a few emotional problems, though some might argue so does every member of the Bat-Family. But he loses control and panics, and within the first four pages of this story, a teen boy has shot and killed a cop.

The City Council responds, with a Councilwoman Noctua pushing an anti-Robin law. If any juvenile is caught with Robin paraphernalia, they will be considered a delinquent, and will be arrested. Thus Damien confronts the Robins, Tim Drake (Red Robin) works with Jason Todd (formerly dead Robin and now Red Hood) to try and get Damien under control, and, of course, Dick Grayson has to join the fray. 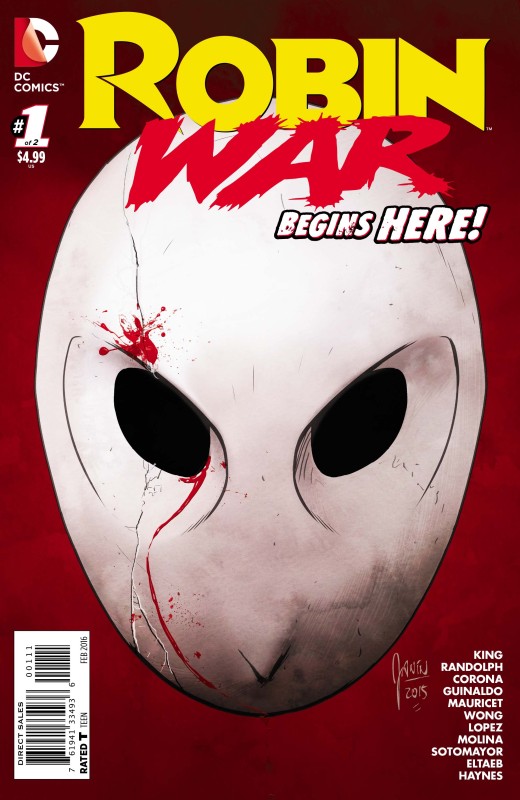 It’s revealed early on that Noctua (an echo of old Bat-villain Nocturna?) is actually seeking membership in the Court of Owls, and that somehow all this youth violence is being orchestrated by them. Yes, it’s a Bat-book, and for an event, you need a villain. But how much more challenging would it be if the argument that kids dressing up and fighting crime does simply lead to tragedy? (In the real life, it pretty much would, right?)

But this isn’t meant to be so much thought-provoking as an adventure with all of Batman’s sidekicks and former sidekicks. All of it is supposed to lead into a rousing crossover that will help define every one of these characters’ identities, definitely a necessity in the ever-changing landscape of Batman in the larger DC Universe. And maybe a few months ago, or a few months from now, it wouldn’t have struck the chord it just did with me.

It’s not a badly done book. The art feels pretty modern and appealing to teen readers. Very few of these crossovers are particularly memorable, but on the flip side, they’re usually entertaining. Robin War could turn out to be entertaining. This week, though, it just feels wrong and facile. Maybe you should read it, just maybe not this week.