There’s been an accident up by Rust Creek. In fact, it seems like there’s always somebody poking around there and causing some kind of trouble. But college student Sawyer Scott (Hermione Corfield) couldn’t know that her GPS would make her take a wrong turn into the middle of nowhere. And she couldn’t know that instead of heading to a job interview, she’d be fighting just to survive.

In Rust Creek, the new thriller from IFC-Midnight, director Jen McGowan brings depth to what could have been standard fare. The plot doesn’t offer much in the way of surprise, but McGowan seems to know that. Instead, she focuses on the humanity and complexity of her characters, making them surprising and offering a showcase for some character actors that bring a strange warmth to people we by all rights should despise. Credit Julie Lipson’s script for also making backwoods meth dealers smarter than their stereotypes.

That’s not Sawyer — there’s nothing that this kid does wrong that any other college student wouldn’t believably do. Offered a coveted opportunity, she doesn’t think about her family as much as she should, so they think she’s staying on campus for Thanksgiving while all her friends think she went home. Thus her disappearance wouldn’t be noticed.

Her second mistake is counting on technology — but who wouldn’t? When faced with unsettling good samaritans, the right alarm bells go off, and McGowan and Corfield establish that Sawyer is a fighter. It’s just not enough to escape unscathed.

Lost and injured in the woods of eastern Kentucky, Sawyer endures her pain and fear, with cinematographer Michelle Lawler framing the cold beauty of the wilderness, providing a counterpoint with the warmth of the sheriff’s office and later, the trailer that Sawyer will depend on for survival.

Though it could have been tempting, the actors refrain from chewing their parts. From state troopers to Sawyer herself, these are people with the unpredictability of being, well, real. They do smart things and dumb things, and McGowan has also given a good showcase for long-time veteran Sean O’Bryan as Sheriff O’Doyle. He’s one of those faces you’ve seen all over the place, and here he gets to stretch in what would have been a rote role in a lesser movie.

Because even if you know the story — and I’m not going to pretend you don’t — it’s the teller, not the tale. Led by McGowan and Corfield, Rust Creek tells the story well. It’s a strong entry in the genre paced well, with fun moments and a few unexpected touches.

Rust Creek  is currently playing theatrically in limited release and VOD through IFC-Midnight. 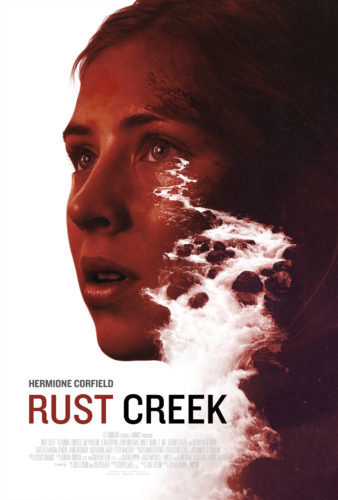