Scott Pilgrim vs. The World is like a twenty hit combo ending with a giant shuriken to the skull. And if you know what I’m talking about, this movie is for you (If you didn’t, then keep reading.)

The new film from Edgar Wright (Shaun of the Dead, Hot Fuzz) and starring Mr. Superbad himself, Michael Cera, is a sensorial gift to your eyes and ears with megabytes of video game references and sounds that will leave you punch drunk with a smile on your face. Based on the Scott Pilgrim graphic novels created by Bryan Lee O’Malley, the film is a living, breathing comic book and it’s Wright’s best film yet.

But before you jump ship thinking that this film is only for the gamer/fanboy set, you need to slow your roll. Scott Pilgrim vs. The World is an innovation of film making that returns the fun and mysticism back into cinema. It’s a quirky, happy go lucky film that basically takes the teen movie and levels it up to maximum experience. Even more than Inception, this film is a dream come true. Beautifully flashy, whimsically funny and entirely energetic, Scott Pilgrim is a film that speaks to a generation. But it’s not exclusive. This film speaks to the youth of our society of course, the twenty somethings who were raised by Nintendo and Sega Genesis, or the hipsters who play in a band and only listen to college radio but it also speaks to lovers of ground breaking cinema and storytelling. 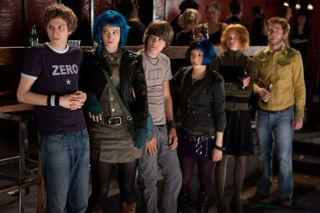 The premise is basic and essentially thin – Scott Pilgrim must face and defeat the seven evil exes of his new girlfriend in order to win her affection. There’s not much else and in someone else’s hands, this movie might have been a disaster, but Edgar Wright proves that he not only understands the vibe and feel of the source material but that he’s in the heads of the youth today.

So much of this film plays to the attention deficit crowd that is young moviegoers in America. It moves fast – quick cuts, visual and musical cues, action packed fight scenes and great, youthful humor. Yet ultimately, it has heart and finds it audience by connecting its quaint self to certain truths like friendship, self confidence and love. Where it appeals to the broader audience is in its own awareness. The film exists in its own universe and in a way it transcends what we all have come to learn in watching other movies by skipping over traditional conventions and just getting to the point.

Scott Pilgrim sees the girl of his dreams, Ramona Flowers, literally in his dreams. When looking for her, he shows a crude scribble of a drawing to a fellow party-goer and he knows exactly who Scott is asking about. When he goes about meeting Ramona, who happens to be a delivery girl for Amazon.com, Scott orders something from the site and patiently waits at the front door, only seconds after he closed his online shopping cart.

It’s these quirks that move the story along quite quickly and to us savvy movie watchers it’s a refreshing story choice that seems off kilter at first but then just feels right once we’re immersed in the world that Wright has set up. 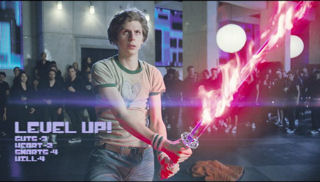 Aside from the stylistic direction style that Wright brings to the table, Scott Pilgrim vs. The World’s other strongest attribute is its great cast.

Cera is great here and he gets to show his action hero chops here as he tackles many a fight scene. Scott Pilgrim is also kind of a player and it’s a nice change to see young Cera playing an almost unlikeable protagonist. But he couldn’t work without the tremendous support of his co-stars. Ellen Wong kicks ass as Knives Chau, the seventeen year old Scott starts dating. Wong grabs the roll of Knives and just puts everything she’s got into it. Without a doubt she’s a crowd pleaser and I predict the next big girl crush. Kieran Culkin mans up with his portrayal as Scott’s gay roommate Wallace Wells. He’s the story’s mentor character and Scott’s motivational leader. Not to mention he’s hilarious. The rest of the cast is so fun and charismatic that it just makes watching the whole film a treat. Other stand outs are Chris Evans playing a caricature tough guy movie star and Brandon Routh as a vegan bass player with telekinesis.

I dug this film a lot and it had a lot to dig. I mean, c’mon it’s a movie about rock n roll, live action video game fights, comic books panels in real life and hot chicks. Pretty much everything I’ve ever enjoyed in my whole life. But all in all it’s a quirky stylistic comedy with a great cast, script and direction and totally worthy of your time. 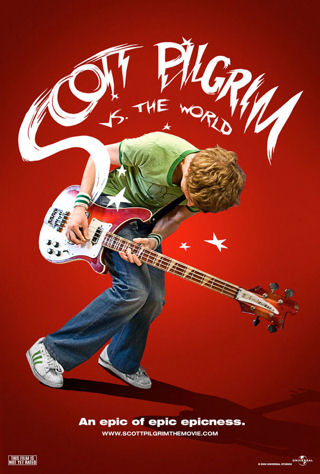