To make a parody work at its best, you can’t just have knowledge about the target, you have to have so much that it proves that deep down, you love it. I can’t say for sure that writer Patrick Baker has cheap pull-out posters of Justin Bieber, One Direction, or either Sprouse on his wall, but he must love Doctor Who. Or maybe I’m projecting to make myself feel better.

TARDIS Beat, the strange and yet appropriate mash-up of teen fan magazine with Doctor Who fandom, is the latest publication from The Devastator, a strong claimant to the title of 21st century heir to National Lampoon. Though a slim volume for its price of $7, TARDIS Beat doesn’t miss a beat in skewering the theory that the U.S. Whovian surge has been because of “the nice boyfriend” versions of the Doctor – David Tennant and Matt Smith — but then takes it further and applies it to all of them. And really, though he wouldn’t come right out and say it, couldn’t you see the 4th Doctor (Tom Baker) extolling his own virtues in an article entitled “Reasons to Date a Man Wearing an Improbably Huge Scarf”? 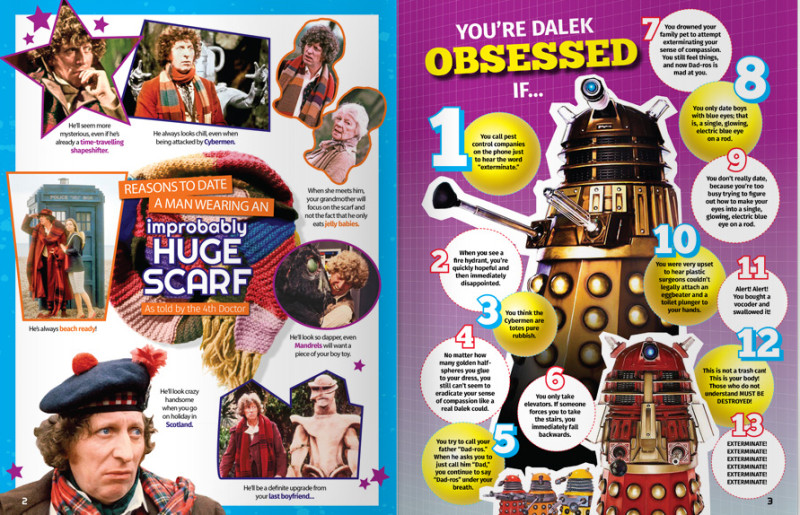 Baker (Patrick, not Tom) goes deeper in interview segments with the 9th, 12th, and War Doctors, each one pitch perfect in the Doctors’ responses to inane interview questions. I can even hear John Hurt growling in exasperation, “you know I commit genocide, right?” They’re all exasperated and befuddled by a teen girl focusing on how cool the Doctor is without seeming to grasp the basic concepts of who he is. Hmm. Maybe it’s not teen magazine journalism Baker has in his sights; it could be political, too.

The parody includes such helpful articles as “How to Get That Beautiful Bad Wolf Look” (…”cry a single tear to show that you still have feels despite being omnipotent”) and a Quiz to determine if you’re Companion material. Plus there’s the requisite pull-out Boy Band poster — of the Cybermen. And what Baker does with the Weeping Angels — it’s sublime.

TARDIS Beat is clever and spot-on. You will laugh. It would also make a great gift item for the Whovian in your life just a little bit down that we’re not going to see new Doctor Who until December 2016. Smile, though your heart is breaking. You can purchase it here. 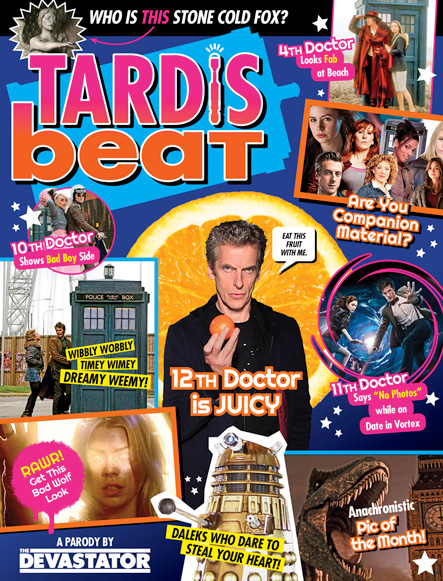