If the trailers made The Amazing Spider-Man 2 look ridiculous to you, chances are watching the whole thing will not change that opinion. Let’s face it: many of Spider-Man’s stories and enemies are ridiculous, and director Marc Webb makes no effort to change that.

But Peter Parker’s (Andrew Garfield) story isn’t ridiculous. As in the previous film, meticulous care is spent on the man behind the mask, with light touches of the super-powered life he lives. When he puts on the mask, it seems pretty hard for logic and believability to keep up with the web-swinging.

Then again, this is a series about a boy bitten by a genetically altered spider who doesn’t die.

If you didn’t see The Amazing Spider-Man, that doesn’t seem to be a problem. Webb’s follow-up to his initial reboot begins almost exactly the same way — as a suspense film about Peter Parker’s father Richard (Campbell Scott), and not Spider-Man. As before, there are hints of a connection to the monolithic Oscorp (for my fanboys, it exists more like Ultimate Spider-Man than Amazing Spider-Man comics).

This time that story plays out further. Richard Parker gets a moment to be a hero in his own right, even if his efforts are doomed. And though a video clip keeps hinting he desperately wants to protect his young son, Richard certainly leaves enough clues behind for the adult Peter to put everything together and get stuck in the middle of it all. 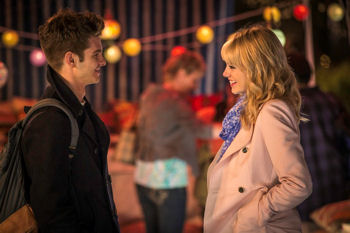 Because of course, even without spider powers, Peter Parker would be a good guy. Instead of tremendous guilt over the death of his Uncle Ben, it’s visions of Captain Stacy (Dennis Leary) that haunt him. Every time his relationship with Gwen Stacy (Emma Stone) seems to be taking a step forward, that spectre appears, silently judging him.

And so we get to the meat of what interests Webb. The will they won’t they aspect of decades of comics gets compressed — maybe a little messily — into two hours. It also works. Not for a minute can you doubt that Peter loves Gwen and vice versa, and the script allows for the dilemma of Spider-Man to interfere without overshadowing the tender scenes between Garfield and Stone.

In particular, Webb stages a scene with Peter crossing the street to reconcile with Gwen. Locked on to the sight of the woman he loves, his spider-sense subtly allows him to walk through traffic with no effort — both a demonstration of his power but also an illustration of how love can blind someone to the dangers in its path and sometimes make you feel invincible.

Yet of course, we need to have Spider-Man, and that’s what Sony paid for. For the most part, the script by Alex Kurtzman, Roberto Orci and Jeff Pinkner has captured the spirit of Spider-Man that Raimi’s films just didn’t have. He’s almost constantly wise-cracking in battle, well-meaning and — literally — an inspiration to children.

While the citizens of New York seem divided in how they feel about him, it’s clear that Peter wants to do good. (J. Jonah Jameson makes his presence known, without actually appearing.) That belief spreads to Max Dillon (Jamie Foxx), who Spider-Man saves while chasing down a heist of Plutonium from Oscorp.

And it’s Max’s story, while treated somewhat sympathetically by Foxx and Webb, that gets silly. Because Max is fated to become Electro, and there’s just no way to give realism to that scenario.

It becomes cartoony, with Max being an outsider whose design for a power grid were stolen by Oscorp, even while they still maintained his employment.

Bitter and barely able to connect with other humans — especially his supervisor, Alastair Smythe (played in shorthand style by B.J. Novak) — Max has built up a fantasy friendship with Spider-Man, that turns deadly when he’s altered into the unrecognizable Electro.

It also turns out that Peter had a real friendship with Harry Osborn (Dane DeHaan), called home from boarding school by the dying Norman (Chris Cooper). It’s actually kind of welcome that Norman’s ruthlessness has affected everything without him being an active player. It is Harry who will become twisted and warped, though with a slightly sympathetic edge that is almost lost because DeHaan just screams “villain!” from the second he steps on screen.

Here not having seen the previous film works better because there didn’t seem to be any direct connection between the Osborns and the Parkers that Peter had been aware of there. Now he and Harry were childhood friends until Norman sent his own son away.

The Osborn plot feels extremely rushed, and so, yes, charges of this movie being ovestuffed are somewhat justified. (Though Paul Giamatti’s Rhino is handled better than you might think — except for the armor.) 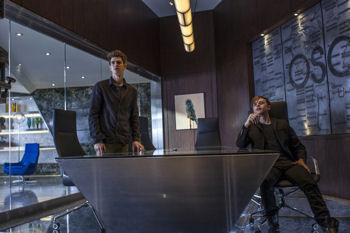 As seems to be a growing problem with blockbusters, and Kurtzman and Orci scripts in particular, the big set pieces might be huge and eye-popping, but the details are lacking.

Case in point: after that beautiful example of Peter using his spider-sense almost unconsciously, when he becomes Spider-Man, Webb chooses to illustrate it switching to slow-motion and freeze frame. Maybe that’s how Peter experiences it when he thinks about it, but it becomes an obvious ploy to just stretch out tension.

And Webb (or his second unit team) have not edited the action together particularly well. After the great fight scenes of Captain America: The Winter Soldier, viewers have been spoiled with the ability to actually track the course of the fight.

Once all the pieces are in place, however awkwardly placed there, it seems to get a good rhythm going, and the dual villainy of Electro and the Green Goblin (setting up an already infamous Sinister Six movie) never feels forced.

It remains flawed, but watchable. Maybe Electro’s origin is no more ridiculous than Michelle Pfeiffer’s Catwoman, and everybody ate up Batman Returns at the time. And though Webb has set his film in a realistic New York, it’s still not meant to be the real New York — it’s a magical place where two young adults can awkwardly fumble toward a real love and the pain that comes up with having to grow up.

If you know continuity, it also nods to the original comics by Stan Lee, Steve Ditko and, though uncredited by the movie makers, John Romita, Gerry Conway and Ross Andru. Like Peter, The Amazing Spider-Man 2 has the best intentions, yet sometimes that isn’t enough. More often than not, though, it highlights why readers fell in love with the comics in the first place..