Just a few days from now in a toy store far, far too close, Star Wars will have kids dancing in the aisles. Come on, it’s not like it ever actually went away, but perhaps a religion-inspiring franchise can get insecure with all those superheroes competing for the hearts and minds of children.

Thus we get the animated (and by the way, far less expensive to produce) installment, The Clone Wars. Set between the live-action Episodes 2 and 3 but after the previous animated series of the same name, perhaps the most surprising thing about this movie is that it’s not half-bad.

Of course, that qualifies it as half-good. For a narrative cobbled together from three episodes of the impending animated series, The Clone Wars actually stands up pretty well. If you ignore what you know from the other films, you might even find yourself caught up in the threats to Anakin Skywalker (here voiced by Matt Lanter), a roguishly scarred dark-clad Jedi Knight.

Despite his clear stance as a cocky hot-shot loner (supported by a troop of clones, though), Anakin finds himself saddled with a paduwan, which is Jedi jargon for intern. Meant to reflect his Anakin’s own impetuousness and give girls a character to emulate, Ahsoka Tano (Ashley Eckstein) veers from hero-worship to overconfidence at the drop of a plot convenience.

(Also ignore that in the live-action films, there’s no way that Obi-Wan Kenobi would have deemed Anakin fit to have a paduwan. Here, it’s a wacky conspiracy between Obi-Wan and Yoda to teach Anakin a sense of responsibility – and allows Yoda to say something wise about Anakin’s character that shows Yoda has both keen insight and an unerring ability to do exactly the wrong thing about it.)

They find themselves caught up in a rescue mission that makes the bulk of the film’s plot. Count Dooku (Christopher Lee – yes, Christopher Lee ) has engineered the kidnapping of Jabba the Hutt’s son, a slimy little larva Ahsoka dubs Stinky. If the Jedi can rescue him, Jabba will side with the Republic and make it easier on transportation in the outer worlds. If Dooku can frame the Jedi, however, then Jabba sides with the Rebellion and really, isn’t it kind of weird that the allegiances of 1, 2 and 3 are the exact opposite of 4, 5 and 6?

Kids won’t know, though. Nor will they remember that actually both sides of this war are being orchestrated by Palpatine (Ian Abercrombie). Again, overlooking that most of the people we’re rooting for here will be killed or turned evil in Revenge of the Sith, things get fairly exciting – eventually.

Because the title is The Clone Wars, the first fifteen minutes or so get taken up by a pretty pointless series of battles. The screenwriters clearly didn’t veer too far from George Lucas’ blueprint, as this was a problem in the other films, too. It’s also not well-plotted here, with Anakin and Ahsoka pulling off a supposedly clever battle tactic that would have occurred with or without their efforts.

The sophistication level isn’t too high. In addition to the nickname Stinky, which calls to mind the Star Wars Holiday Special naming Chewbacca’s children Itchy and Lumpy, Ahsoka calls Anakin “Skyguy” and he calls her “Snips.”

Both Anakin and Obi-Wan can sense when the Sith assassin Ventris is on the same planet as they are, but miss when Dooku stands less than thirty feet away, practically begging the Dark Side to sidle up to Obi-Wan and bite him on the butt. And lord, why must Dooku’s army of droids be so woefully, utterly stupid? Who would design a line of soldierbots with processing power that makes Jar-Jar Binks look like a tactical genius?

Lest this get too dismissive, the art direction on this show needs to be praised. Though in terms of animation, the production has problems working with light sources, it’s because what they’re shooting for is making this series look like moving production paintings. The angularity of the characters, though also echoing the earlier animated effort, come straight out of Ralph McQuarrie’s original concepts for the franchise.

There’s creativity elsewhere, too. Since the troopers all have the same Fett face, they express their individuality in hair style, and apparently don’t get too creeped out when at ease and just staring at themselves all the time. We meet Jabba’s Coruscant-based uncle, Ziro the Hutt (Corey Burton), who dresses in purple and gets a voice like Truman Capote.

That’s just one of the great voice performances in the film. The animated Anakin runs rings around the live-action one as far as charisma and nuance goes, so credit has to go to Lanter. Playing all the clones, Dee Bradley Baker manages to use the same voice to create reasonably different characters. 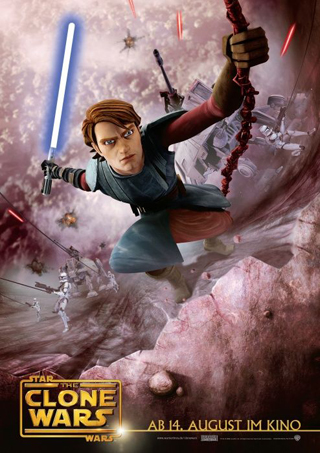 Horror great Lee at least sounds like he enjoys voicing Dooku, and you just know that Samuel L. Jackson smiles off-screen every time he gets to play Mace Windu. Say what you will, the man is secretly one of us. And when C-3PO finally appears, hearing Anthony Daniels’ voice is strangely reassuring.

It often doesn’t make much sense, but taken on its own, The Clone Wars satisfies a lot more cleanly than 1, 2 and 3. But you might consider that a problem as it contradicts so much of what we geeks think of as lore. Guess what, though? It’s not for us, and as such is hard to recommend as a theatrical film, when we know it’s coming soon enough to the Cartoon Network. Still, there’s a long history of both Star Wars and animated toy tie-ins milking us, and The Clone Wars is at least entertaining enough for you to not immediately notice.