Disney used to make movies like The Good Dinosaur — stories of hardy pioneer families and the troubled son who found himself when bonding with his pet, often lost in the wilderness. Sometimes these movies would get theatrical release, sometimes they would end up on The Wonderful World of Disney.  Tommy Kirk, Kevin Corcoran or Johnny Whitaker would star, and maybe they weren’t huge blockbusters in the sense we’re used to today, but they were decent family entertainment and still hold up.

Now the boy is a dinosaur, and the dog is a boy, but the overall shape remains the same. The stakes have to get raised when Disney*Pixar releases a film, but The Good Dinosaur feels like a throwback. Story-wise, it’s small and gentle, though it still has action in the vein of Old Yeller (don’t worry, Spot survives). It’s about decent people, er, dinosaurs, and that’s both a strength and a weakness.

After a very brief prologue that’s actually been revealed in most advertising, dinosaurs remain the dominant life form on Earth. The asteroid missed the planet 65 million years ago, and then we go “millions of years later” to a farm where a dinosaur patriarch (Jeffrey Wright) plows the fields and waits for the hatching of his first children. (He’s listed as Poppa in the credits, but called “Henry” near the end — just in case you missed that pioneer America parallel.) 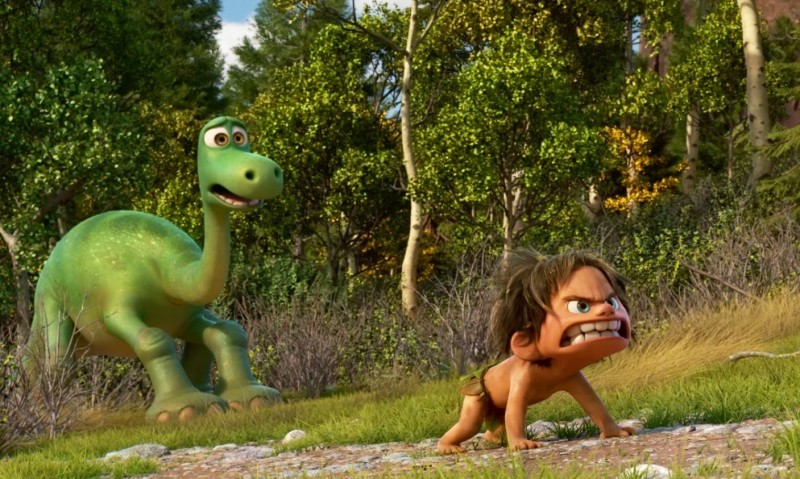 The youngest of the children, Arlo, is a cute little runt who has a problem with fear. While his siblings can handle their farm chores, Arlo (Raymond Ochoa) doesn’t have either the physical strength or, when it comes right down to it, the courage. The primeval chickens that the family raises bully him, and when Poppa tries to help him dinosaur up, he fails miserably. Despite Arlo’s willingness to guard the corn silo, a critter keeps getting in, and Arlo cannot bring himself to kill it. Good thing, because kids in the audience will immediately recognize that critter as Spot the human (Jack Bright).

As in The Lion King, Arlo accidentally puts his father into mortal danger. But to Director Peter Sohn’s credit, it’s also clearly caused as much by Poppa himself losing his patience with his cowardly son, a very recognizably human moment. Without Poppa around for the harvest, the family may starve, and when Arlo sees that critter again, he resolves to chase it down and kill it. Of course, things don’t quite work out that way.

Instead, the two have a slow bonding in the wilderness, dependent upon each other for survival. They encounter a variety of other dinosaurs, including the slightly disturbing Tyrannosaurus Rex cattleherders and some very disturbed Pteranadons. But most of the narrative is about Arlo and Spot crossing the divide from reluctant enemies to reluctant friends, without the ability to speak the same language. (Spot does seem to understand English, but mostly makes chuffing sounds.) 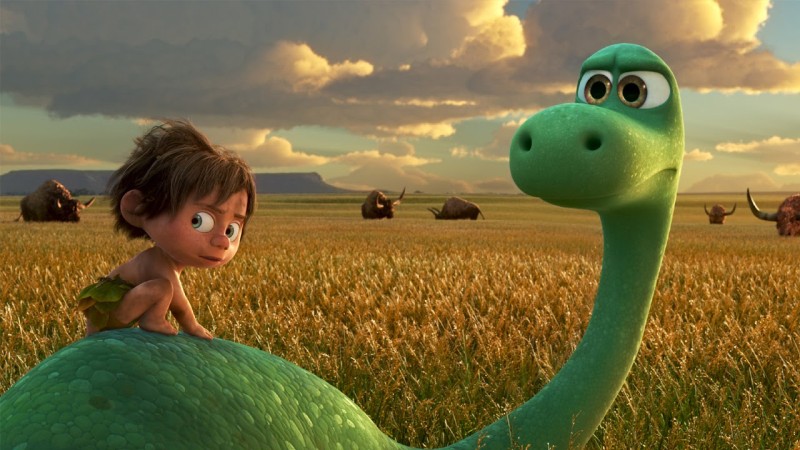 The Good Dinosaur is an amazing technical achievement. By setting it in the equivalent of the mid-Western wilderness, Sohn and his team have focused on making the environment look and feel real. Water drips off of the characters exactly right, and the lush prairies wave in the wind with a photorealism that really has pushed past the uncanny. This world is beautiful.

But we also don’t really get to understand it. When Disney made movies like Old Yeller and Savage Sam, if you put a wilderness homestead out there, we knew the shorthand. We knew what it was. When you do this with dinosaurs instead of humans, and they haven’t evolved in any visible way, some nagging questions about dinosaur society keep coming up. If they’re vegetarians, why are they raising chickens? Do they sell them? And if so, to whom? We only see Arlo interacting with other types of dinosaurs, and he’s meant to be naive. The audience just has no context except perhaps for Jurassic Park.  There’s also an odd question with Spot wearing clothes but dinosaurs not bothering. I’ll admit it doesn’t bother me quite as much as WHO BUILT CARS?!? but it just kept swimming back up, as Sohn keeps showing off grand vistas. Granted, it’s one of the tropes of a Western, but the novelty of dinosaurs in the human roles requires a little more explanation.

Still, as in Inside/Out, the Pixar team does a good job of allowing characters (and by extension, children in the audience) to explore darker emotions. Arlo feels out and out terror in the face of a storm, as it’s a flood that takes his Poppa away. That journey to conquer fear — and the reality that you never really quite do it — is an important message. Kids have seen their parents get angry, and sometimes, yes, it is a bit unreasonable. And people transfer their own sense of guilt onto targets, as Arlo initially does with Spot.

So there’s a lot to recommend about The Good Dinosaur, with moments of beauty and emotional complexity. But it drags in a few spots, and in terms of sheer creativity, gets a little outdone by the short preceding it, Sanjay’s Super Team. The characters that liven The Good Dinosaur up stay only briefly, making frustrating glimpses into a larger story.

It has to happen from time to time. Disney*Pixar turned out a good movie, but we’ve been conditioned to expect great ones. 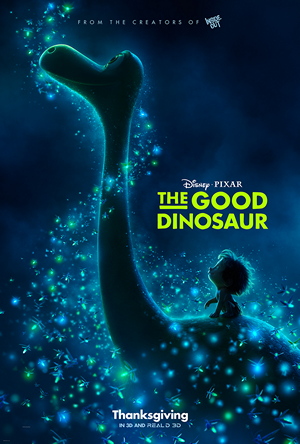