Youtuber Matthew Finnemore has had a chance to attend the soft opening of Shanghai Disneyland, and posted a ride-through video of their official “Pirates of the Caribbean” ride, “Battle for the Sunken Treasure.” Unlike Disneyland Resort in Anaheim, which fits the attraction in New Orleans Square, the Pirates take up an entire land to themselves — and this flagship ride leans heavily on the established film story, in a sort of pop culture infinite loop.

Familiar scenes from Anaheim and Orlando become the skeletal threats of the beginning, and then… the movie characters begin appearing and it’s nothing short of amazing. It’s pretty cool hearing what the Chinese dubbing for Johnny Depp and Bill Nighy sounds like. To describe it is to ruin what you’re about to see. Suffice to say that Shanghai Disneyland, officially opening on June 16, 2016, looks truly spectacular.

The video is a little blurry and shaky at times but that’s only right. To truly appreciate it, we have to go there and experience it. Start saving now. 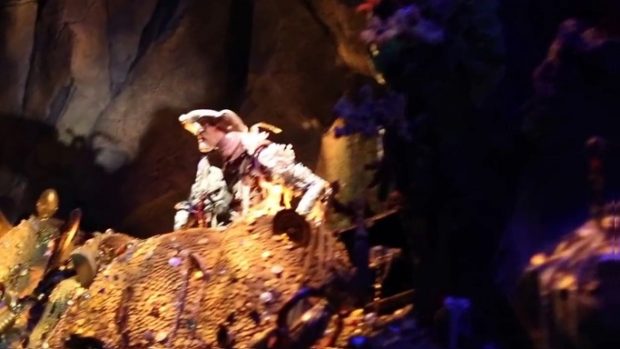