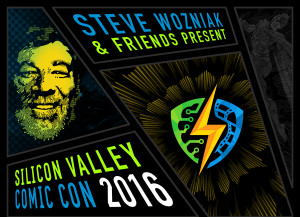 announced that Big Wow Comic Fest would transform into the Silicon Valley Comic Con for 2016. There were hints of many events, not just one show a year. Mainly, though, the intention sounded like Wozniak rightly believed that San Jose (and the greater Silicon Valley) should not just be recognized as a huge population center of fans, but should become a major draw for them.

After months of silence (though definitely not behind the scenes), Monday exploded with the announcement that the first Silicon Valley Comic Con would feature William Shatner

celebrating Star Trek’s 50th Anniversary. And today, SVCC released information on purchasing tickets for the show, being held March 18-20 in 2016 at the San Jose Convention Center.

Where is Stan Lee in this? Let’s be fair — he has his own Comickaze coming up Halloween weekend in Los Angeles, and at 93, that’s probably taking up a lot of his energy. I’ll believe he’s still included in the “…and Friends” of “Steve Wozniak and Friends.” But this is Woz’ show all the way, and I have no doubt that his enthusiasm is genuine and driving this pretty hard.

You can purchase those tickets here.