25 years ago, the seeds were planted to change the face of Disney fandom forever. When Tim Burton’s The Nightmare Before Christmas was initially released, it wasn’t particularly considered successful. Maybe audiences thought Burton’s dark (yet cuddly and very original) vision of Halloween crashing into the Yuletide spirit was too weird. But as happened with a lot of good but overlooked movies in the age of home video, its reputation grew and grew – or maybe the world finally got weird enough itself to accept Jack Skellington as the Pumpkin King, and get into Danny Elfman’s comic operetta score. Its success did a lot for its merchandising, now everyone can look elegantly spooky in a onesie with Jack Skellington on their chest.

Whatever the reason, Disney discovered they had a sleeper hit, and now The Nightmare Before Christmas is one of their top brands in consumer products, and the Haunted Mansions in both Anaheim and Tokyo get annual magnificent makeovers to become “Jack’s Haunted Mansion Holiday.”

In a nice change of pace/return to form, Disney will be releasing a sing-along edition on September 2, 2018, in both digital and blu-ray simultaneously. No delay, just Jack Skellington. You can watch the film the way it was originally released, or you can watch it with pop-up lyrics and sing along. Can you match Elfman? (Seriously, let me know – I am looking to find a good Oingo Boingo cover band.)

Most of the extras have been on the previous blu-ray, but if I’m reading it correctly, the new blu-ray will include the original version of Burton’s short Vincent, about a boy who looks an awful lot like Tim Burton who has an obsession with all things gothic, and most specifically Vincent Price. In the original version, Price himself narrated, but Disney did a later “storytelling” extra narrated by Christopher Lee. (Lee also narrates the original “picture book” version of The Nightmare Before Christmas.) 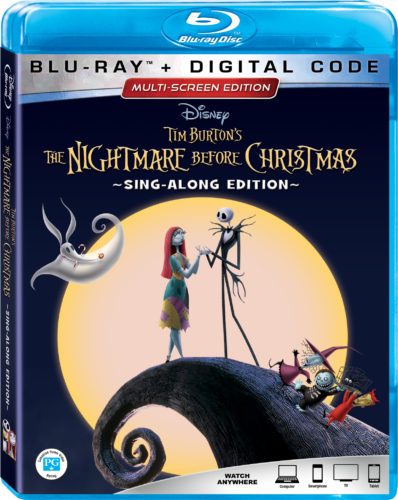 The full list of bonus features is here, though as has become the strange industry standard, they vary by retailer:

Song Selection – Shriek along with these ghoulish tunes from the movie, or just lend an ear if you find singing to be particularly ghastly.