If you’re going to say Bram Stoker got it wrong, then you’d better have a good vampire variant to be right. Writer/director Chris Baugh gives you a hint right off, and he’s right. He’s got a good one. Boys from County Hell, now streaming on Shudder, begins with an elderly couple settling down to watch TV, when their noses start bleeding. Then their eyes. Something isn’t just sucking their blood; it’s pulling it and pooling it from a distance. Who can possibly stand in its way?

The couple, the vampire, and our heroes all reside in Six Mile Hill, a small town in Ireland that holds some tourist attention because Stoker drank in the local pub one night. The locals claim the author based Dracula upon their legend of the much older fiend Abhartach. Some resent it, and some, like Eugene Moffat (Jack Rowan) and his friends, at least enjoy pranking tourists and scaring them on tours to the mysterious cairn in the middle of his father’s land. It’s old. Older than recorded local history, and no one dares to disturb it.

Except a freeway is going to go through it, disturbing locals’ way of life. Of course, if you know your horror movies, it will also waken something else.

At its heart, Boys from County Hell could be a touching drama about a father and son wrestling with grief while trying to understand each other. But it layers on quirky small town shenanigans as a quartet of friends are growing up and apart. All of that is built upon that cairn — something slumbers in Six Mile Hill, and that something casts a dark shadow over everything else. Yet the film rips along with a sense of fun, even when it’s got blood all over it.

Every actor is compelling, even if they’re playing a stereotypical role, like Michael Hough as SP, the slacker whose ambition is to die on the couch watching telly with a beer in his hand. Of course, he’d hope it was of old age. For fans of Derry Girls, Louisa Harland is a revelation as SP’s sister — far more straightforward and competent than her character on the sitcom. Admittedly, the accents are thick, and you may want to have subtitles on to catch everything. But Baugh has framed everything so well that even if you miss a few lines, you won’t drop out of the story.

Even though it’s about a possible apocalypse, Boys from County Hell is a romp with moments of emotional depth. Don’t let it get lost in your streaming queue; make sure you make time for a visit. 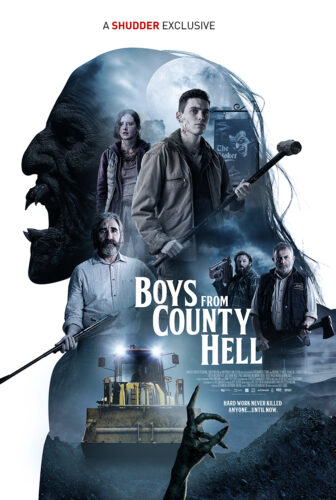