A young woman lies dead on Balete Drive. It looks like a hit and run, just another sad and all too common tragedy. But it’s 2005, and the neighbors identify the woman as someone who died in the neighborhood in the 1960s. What’s there to do but call on Alexandra Trese? One taste of a mysterious powder at the scene, and Alexandra knows things are even wilder than the police thought, and in ways the police would rather not know.

Almost as mysterious as the crimes she investigates, Trese quickly demonstrates she’s in tune with the underworld of Manila. By underworld, this book really means the world of the supernatural, and if nothing else, Trese would be a fun exposure to Filipino mythology. But writer Budjette Tan and artist KaJo Baldisimo have made this book more than fun. It’s really good comics, and more often than not legitimately disturbing.

Not that anything seems to disturb Alexandra Trese. She’s cool enough stare down a gang of aswang and put the fear of …is it God? into them. There are worse things waiting for her in the slums and in the highrises of Manila, but Trese can handle them all. Tan structures the loosely connected stories cleverly, letting the mystery and adventure play out then following it with excerpts from Alexandra’s father’s journal. She’s the latest in a family that has lived and studied alongside the creatures of myth for centuries, and her father was the one who wrote it all down. 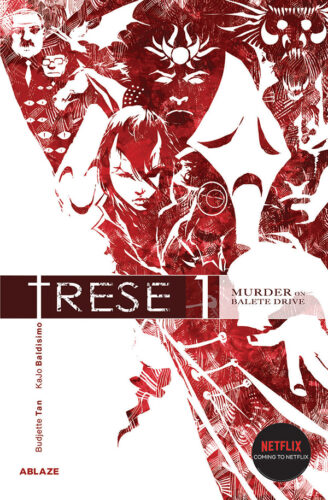 The story structure is perfect, mixing in occasional whimsy and the hint of previous adventures that may or may not be told. Baldisimo’s black and white art has the creepiness of a Warren magazine story (by Alfredo Alcala or Nestor Redondo, of course). Yet it also blends in a manga influence. It’s no wonder that Netflix has picked this book up for their anime programming — it’s already cinematic and Trese is a terrific character. She’s been there, done that, and if she hasn’t seen it all, she’s at least read about it. You don’t mess with Alexandra.

But you do want to pick up the book, which came out in stores this past week from Ablaze Publishing. I admit it — I might have overlooked it if my friend Mike Wellman at Atomic Basement Comics hadn’t been raving about it. I still picked it up thinking it was a straight-up crime book and was rewarded for my ignorance. Check with your local comics shop; Trese makes a great holiday vacation read.

Fanboy Planet is an Amazon affiliate. Any purchases made through links or search boxes on this site may generate revenue.