It’s rare that an audio drama invites you to have a lie down while you listen. Rarer still that you’d associate Torchwood, the John Barrowman-led Doctor Who spin-off, with relaxation. The team is usually caught up in dark adventures protecting the Earth from alien incursions. Even with the soothing voice of Sir Michael Palin narrating, you’d suspect a trap. And you’d be right.

Big Finish tends to play around with audio drama expectations. They love stories, but they also love keeping things fresh. Though a haunted cassette tape doesn’t sound all that fresh, writer Tim Foley turns the high concept into a tour de force for Palin, who essentially plays himself, but… not.

Tropical Beach Sounds and Other Relaxing Seascapes #4 begins exactly as the title promises. It’s a self-help tape to help a nameless listener get centered. Except the center slowly drifts from the benevolent, calming tones of Palin to something more sinister, a guided meditation that’s actually guiding through Torchwood’s hub and taking out the team.

It’s a clever conceit that works well. The storytelling remains focused through Palin’s voice, without robbing of the drama. We’re both consumer and character, hijacked by a malevolent entity that’s been waiting for a few decades for someone to listen to the tape. (Which you’re probably not listening to on tape.) 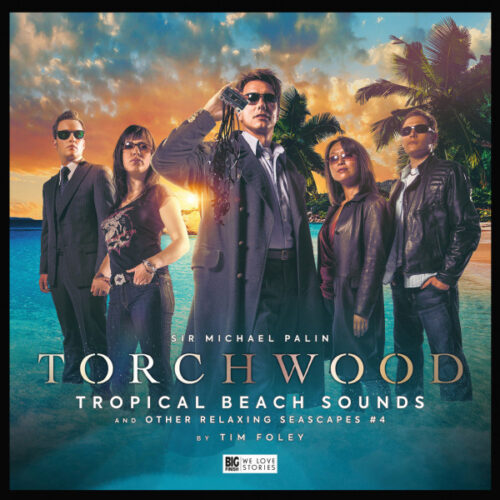 Palin runs with it, and Foley’s script takes advantage of his skills. He’s the avuncular persona we  know, which makes it all the more compelling when his dulcet demeanor turns on us. Palin also gets to call back to a Monty Python sketch in which he stuttered at the ends of words, a subtle reminder that his cheerfulness masked a dark side in his characters more often than people realized.

When you get someone like Palin involved, you can’t just play evil. There’s a way for Captain Jack to save the day, but still through the context of the narrator. It’s fun. It’s cynical, as Torchwood often can be. But mostly, it’s worth lying down and listening to, not avoiding.