Starting out as a one-shot character in a poker game scene on Buffy The Vampire Slayer, Clem (a.k.a. “The Loose-skinned Demon,” according to his billing at Comic-Con) soon reappeared as Spike’s confidante and buddy. Over the last dark season of Buffy, the character stood out as needed comic relief, with a gentle demeanor belying his horrible appearance. If Buffy has a goofy neighbor from a fifties sitcom, it’s Clem.

The actor behind the make-up, James C. Leary, attended Comic-Con and manned a table in Autograph Row with his charming wife Stacie. On the first official day of the convention we stopped by to talk with James about his career and burgeoning cult status. Friendly and a bit more outgoing than his character, Leary appears to be nothing but thrilled at being Clem.

It also turned out we’d met years before, but that was when we were young and both in improv groups. But let’s make this an official shout out to the old gang from Freudian Slip at Texas A&M, where Leary got his start.

And now, a few moments with James and Stacie…

Derek McCaw: How do you feel about your claim to fame right now being known as “the loose-skinned demon?”

James C. Leary: Heyyyy, any port in the storm. No, it’s great. I love it. I was a huge fan of Buffy before I got on the show, and it’s been really fun. The character’s actually a lot of fun to play, so I love it.

DM: Any weird experiences off-set as a result? Do people recognize you at all?

JCL: No. They don’t recognize me at all. Which is kind of nice.

DM: Have you had much experience with fandom? Is this your first time at a convention?

JCL: This is my very first convention. Ever.

DM: How has it been so far?

JCL: So far it’s been great. It’s been really cool. We came last night, walked around all downstairs. I was like a big kid in a candy store. I’d always wanted to go to a convention as a kid, I just never got the chance to, because I was a huge comic book collector/fan when I was younger.

JCL: My big titles were X-Men, Daredevil, and right when I stopped all the Image had just started, so I did all that — Spawn.

DM: Tell me about your background. What did you do before being Clem?

JCL: I’ve done a lot of commercials. A lot of theater. I studied in Chicago at IO and Second City. A lot of improv theater. Tons and tons of theater. I did a Spanish-language sitcom for two years, called Los Beltran on Telemundo. I spoke Spanish and I don’t speak a word of Spanish, so I did it all phonetically. I played the token gringo on the show. That was a weird experience.

DM: How does that compare to working on Buffy?

JCL: Night and day. Night and day. One, because the first one was a sitcom, and it ran like a four-camera sitcom, you know, rehearsed three four days a week and then shot it all in one night. Buffy is twelve to fourteen hour days. It takes eight days to shoot an episode, so it’s a much longer, more grueling shooting schedule for them than like a sitcom.

DM: Will you be back next season?

JCL: I certainly hope so. They’ve called for availability. Other than that, I don’t know. (laughs and shouts into the recorder) I HONESTLY DON’T KNOW!

DM: I was going to ask what you could tell me without Joss Whedon actually killing you off. Has this given you a lot of new opportunities? Are you getting a lot of calls?

JCL: A few things here and there, but not really, because nobody really knows it’s me. But hopefully it will. And it’s been a great experience, which is sort of the most important thing.

DM: What’s the coolest part about being Clem? 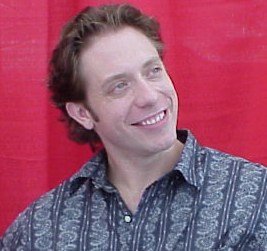 DM: I believe that.

STACIE: He told me one day after working, “If I’d just had these ears back in high school…”

JCL: That’s a whole different story. Not so much the flappy arms, though.

DM: Stacie, tell me about the ears. Are they a real turn-on?

SL: I like the ears, but I haven’t seen them in person yet. I haven’t been onto the set when he was actually filming it. But I’ve heard the stories about the other girls…

DM: Your appearance has made it easier to get my three-year-old into the show. At first you’re scary looking, but then it’s “…oh, he’s a funny man.”

DM: He eats kittens, though.

JCL: That’s never been determined. We’ve never seen him eat a kitten. He plays poker with them. I suspect he’s more into Bugles and Country Time Lemonade.