Whether you knew them as grim and gritty, or as heroes in a half shell, you know the Teenage Mutant Ninja Turtles. Over the decades they’ve had a few different incarnations, some family friendly, some — like their original black and white indie book, not so family friendly. For a concept that began as a light swipe at the X-Men and the work of Frank Miller, it somehow seems appropriate that original creators Kevin Eastman and Peter Laird are envisioning how any and all of the various Turtles sagas could end with a book called The Last Ronin. (One of Miller’s greatest and most underrated works, that would fit right in with TMNT, is Ronin.)

Coming this summer from IDW, in a format similar to how the Turtles originally appeared in comics, The Last Ronin sees Eastman collaborating with writer Tom Waltz and inker Andy Kuhn to bring to life a story he and Laird originally wrote in 1987. Updated to allude to many possible pasts, the story may be positing there is only one future — and it lies with the Last Ronin.

Springing from a lost 1987 storyline by TMNT co-creators Kevin Eastman and Peter Laird, the much-anticipated Teenage Mutant Ninja Turtles: The Last Ronin will be available this summer from IDW Publishing in an epic oversized five-issue miniseries!

In a future New York City far different from the one we know today, a lone surviving Turtle goes on a seemingly hopeless mission to obtain justice for his fallen family and friends. Kinetic layouts from Eastman, atmospheric inks from Andy Kuhn, and a thrilling script full of surprises from longtime TMNT scribe Tom Waltz all combine to make this one of the most memorable TMNT stories that fans will ever read. 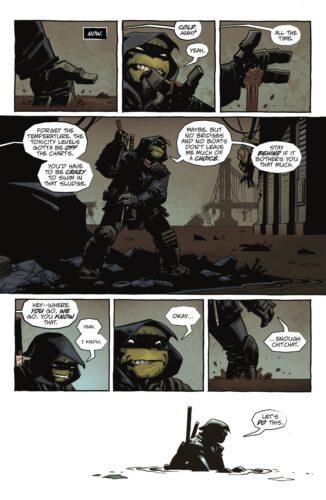 In his own words, Kevin Eastman reflects on the conception of this important TMNT milestone:

“About ten years ago, I re-discovered a twenty page outline for a TMNT story that Peter and I wrote together back in 1987. The story was set thirty years in the future, which (as written then) was set in 2017. Reading through it again, I drifted back to a very different time in TMNT history — back when it was all about the comics, mostly just Peter and I writing and drawing the issues, pre-everything the world would soon come to know about these characters that we’d created and called the Teenage Mutant Ninja Turtles.

“It has been an INCREDIBLE thirty-six year journey, thanks to the brilliant talents of so many that brought new visions and TMNT stories to life, and especially the fans who supported all of them. Nine years ago, I was invited back into the TMNT comic universe, via my friends at IDW Publishing. Aside from the original run with my friend and co-creator Peter Laird, working on the IDW TMNT universe has been the best time I have had with the Turtles for a very, VERY long time. 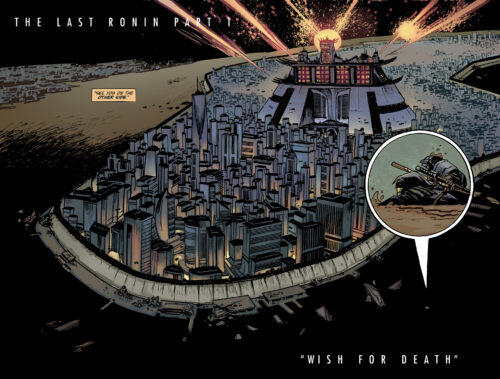 “A little over a year ago, as the ongoing series headed towards issue one hundred, I showed a rough revised and updated version of the story outline (now set in the year 2040) to Tom Waltz, who equally fell in love with the possibilities of it. The Last Ronin is a heartfelt love poem to all the TMNT universes of the past, and offers up an intense look at one possible future — firmly based on and adapted from an original thirty-three year-old idea, from the original creators.

“Trust me — Tom, Andy, and I have just started on a two-hundred page journey… and it IS going to be one HELL of a ride…”

Series co-writer Tom Waltz says, “When Kevin first showed me the outline that he and Peter had created back in the ’80s, I was gobsmacked. Beyond Peter Laird’s eerily prescient technological and sociological predictions, the story idea itself was exciting and versatile, designed in a way that it could be easily modified to fit into the many different TMNT iterations that have existed over the years, without losing any of the core elements injected into it by both Kevin and Peter. I have the absolute honor to join these legendary creators to craft a TMNT story set in a chaotic future, rife with revenge, honor, tragedy, hope, and over-the-top ninja-action sequences that’ll blow any Turtles fan’s mind, no matter what version of the beloved franchise is their favorite.”

“After hitting TMNT #100 last year, we were interested in doing something even larger in scope and also something that really plays to everyone’s strengths,” says editor Bobby Curnow. “The Last Ronin is that project: the future New York we’re building is a perfect place for Tom’s immersive world-building and characterization, and Andy’s art is more innovative and engaging than we’ve ever seen. This is Kevin and Peter’s vision, but the entire team is making it their own and that’s really exciting to see.”

Teenage Mutant Ninja Turtles: The Last Ronin #1 will be available with multiple cover variants for retailers and fans to enjoy, including Cover A by Kevin Eastman and two Retailer Incentive editions by Eastman and Mateus Santolouco (TMNT: Shredder in Hell), respectively. Each issue is a blockbuster 48 pages and 7.5×11 trim size!