One of the most oddly entrancing television shows of my childhood, The Banana Splits, will be coming back to television in 2019… as a horror movie. Originally a “variety” show featuring a band of four anthropomorphic animal musicians, it became a bit of an anthology (easy to redub human-sized puppets whose mouths don’t actually move) that featured Hanna-Barbera cartoons like The Hillbilly Bears, The Three Musketeers, and even Atom Ant.

Bingo the gorilla, Drooper the lion, Fleegle the dog, and Snorky the elephant appeared in comics a couple of years ago in a team-up with DC’s Suicide Squad, but not much as been done with them elsewise. And now, Warner Bros. Home Entertainment will team with Syfy to create a movie that brings them back and puts them in a slasher film. It’s unclear how heavily they’re being redesigned (if at all) from the original Sid and Marty Krofft costumes, or if they’re treating them as actual animal musicians as the comic book did. All we know right now is what this press release tells us:

A cult favorite children’s series gets a horror genre twist with the return of The Banana Splits in a new original film which will premiere in 2019 via Warner Bros. Home Entertainment, in advance of its television debut on SYFY.

The Banana Splits will offer a new take on the classic characters, which were first introduced to audiences in 1968 with The Banana Splits Adventure Hour variety program. In the upcoming horror thriller, a boy named Harley and his family (brother Austin, mother Beth and father Mitch) attend a taping of The Banana Splits TV show, which is supposed to be a fun-filled birthday for young Harley and business as usual for Rebecca, the producer of the series. But things take an unexpected turn — and the body count quickly rises. Can Harley, his mom and their new pals safely escape? 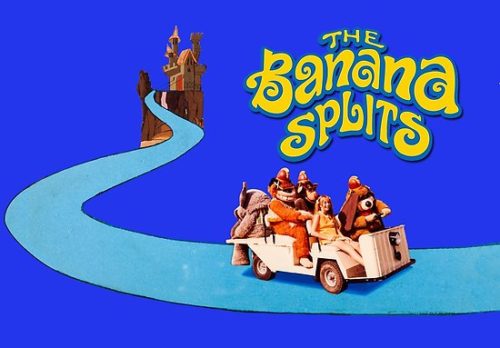 The Banana Splits stars Dani Kind (Wyonna Earp) as Beth, Finlay Wojtak-Hissong (The Kindness of Strangers) as Harley, Romeo Carere as Austin, Steve Lund (Street Legal, Schitt’s Creek) as Mitch, and Sara Canning (The Vampire Diaries, A Series of Unfortunate Events, War for the Planet of the Apes) as Rebecca. The beloved Bingo, Fleegle, Snorky and Drooper will also appear. The film is written by Jed Elinoff & Scott Thomas (Raven’s Home, My Super Psycho Sweet 16) and directed by Danishka Esterhazy (Level 16). The Banana Splits is produced by Blue Ribbon Content in association with Warner Bros. Home Entertainment and SYFY.