Since last we spoke, exactly one of you chimed in with a name for this column. Luckily, it happened to be a pretty good idea so henceforth, I hereby welcome you to The Champagne Room. Watch where you step: it’s dark in here and the rugs can get a bit sticky. But wouldn’t you agree that the disco ball and freak in the gimp costume add a certain homespun ambiance to the joint?

Also since last we spoke, I wrote two scripts for a returning comic book publisher called Mansion Comics. One was for a sci-fi vehicle by name of The Saturnist and the other was for an adult, horror-themed title, You Can’t Scream. It has nudity and bad language; even the ‘C’ word drops in for a quick visit. If it was a movie, I’d rate it a hard ‘R’ which is what one would expect from a comic starring a cop, a vampire, and a witch. Keep an eye out.

Also also since we last spoke, I completed my inking chores on Green Lantern #2 for a little publisher called DC. I’m not sure what’s happening in Green Lantern while I work on it; I don’t read the scripts but I usually make up stories in my head to try to match what’s going on in the pencils.

Most of the time, I actually hit the nail on the head because, as we established in my previous column, I’m a genius. But even when I’m wrong, Doug Mahnke always draws the hell out of the book and that Geoff Johns fellow seems to know how to write a comic book.

Alsoalsoalso since we last spoke, I have no idea why the new, collected edition of Armor X isn’t in stores yet. I’ve literally been told that it’s on a really slow boat from China and that’s why it’s missed shipping. Which is frustrating for me because 1) I want the damn thing in my hands and 2) I had a number of signings lined up to help promote the book, all of which have had to be postponed until it finally arrives in stores.

Which should be soon.

And finally, most ego-gratifyingly to me, I traveled to the strange, distant land of Iowa to do a signing at a store called Limited Edition Comics in Cedar Falls. Or was it Cedar Rapids? I’ll have to fact check that one by the end of this column. But lest you think it was an ordinary day at the park, allow me to correct you. This…was Keith Champagne Day!

(It was actually Keith Champagne and Tom Nguyen Day but I prefer to edit Tom out of it in my mind’s eye. It makes me feel cooler.) 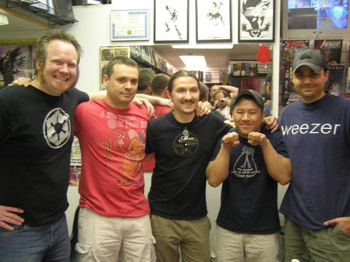 Limited Edition Comics is run by possibly the nicest human being alive, a fella by the name of Rob Rodgers. In the picture, he’s the one with the Wolverine sideburns and, as an interesting aside, is also a professional hairdresser. In fact, Limited Edition comics is divided up so that a portion of the retails space is a hair salon and the rest (most of it) is a comic book store. Or as I think of it in my head, a comic book salon.

One of the benefits of merging a hair salon with a comic book store is that the place smells really good, like baby powder and hair gel instead of the the more common aroma of body odor and musty newsprint one is prone to encounter in a comic book retail establishment. Which is my way of saying it’s a really nice store, very clean and well lit with an astonishingly well organized selection of trades and graphic novels and statues and all that stuff.

A second benefit to having a comic book salon is that many of the comic book customers double as hair cut customers which is a nice way to build a loyal clientele in both directions. This guy Rob Rodgers? He’s a genius. Trust me, it takes one to recognize one.

For the trip, I flew in to Minnesota where I was eventually picked up by Tom Nguyen, who blamed traffic on being at least 18 minutes late to fetch me. I will eventually devote a full column to Tom, maybe nine, because he is worthy of lengthy analysis. Tom pulled the same move on me that he uses on all people he picks up in Minnesota: he took me to the Mall Of America which, as you may have heard, is really, really big and, on the night I was there, was crammed with Somalians. Turns out it was some kind of Somali holiday (a Somiliday?) where, for one night every year, the Minnesota Somalian community does the most American thing they can think of: they go to the mall. I don’t know what this signifies in their culture but apparently, from the literally thousands of Somalians milling about, it’s a pretty big deal.

The next morning, joined by rising young comic book superstar Josh Eddings, we piled into the Nguyenmobile and drove to Iowa. It was a little over a three hour drive and we got there about an hour late, eleven instead of ten, which is when I started noticing a pattern: Tom Nguyen is always late. You heard it here first. 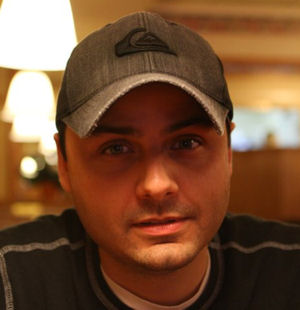 For the next twelve hours, we sat and sketched and signed comics. I’ve never signed for such an extended period of time; usually there are lulls in the line where one gets a little time to relax and stretch their back. But in Iowa, these things play by different rules and we went hardcore, balls to the wall, from the time we sat down to just about 11:00 at night.

I don’t do full sketches at shows. I’m a fast inker but when I draw, I’m slow and I always feel uncomfortable making someone wait an hour as they watch me sketch. I’d imagine it has to be the most boring thing in the world and if I interrupt the process to make conversation, I only drag the poor person’s tedium on longer.

So over the years, I’ve adopted a policy of signing books, chatting comics, and drawing only head sketches. It’s much faster to draw a face than an entire body. I don’t charge for them because I hate my artwork and this way, if I feel something sucks, I don’t have to feel guilty for taking someone’s money for it. It’s a win/win for all involved.

At the end of the evening, we enjoyed some pizza with the last seven or eight people in the store, called it a night, and made the trek back to Minnesota. I like to think it was a successful outing, I’m fairly confident that everyone had a good time except maybe Josh Eddings, who really didn’t want to have pizza for dinner but Tom and I also made him sit in the back seat for both drives. Because that’s how we roll.

So my hearty thanks to Rob Rodgers for flying me out to CEDAR FALLS, IOWA (I double checked between paragraphs) and hosting me for the day. I had such a good time that I’m inclined to return whenever I’m beckoned.

And I’ll make sure we’re on time next time, dammit!

Tune in again at some point in the near future when I will write about something else. Thanks for reading and special thanks to David Tapia for naming this column.

Keith Champagne is the creator of DEATH VALLEY, ARMOR X and (with Peter Tomasi) THE MIGHTY. He’s an excellent convention guest and has worked on more comics, most of them DC, over the past 18 years than he can remember.