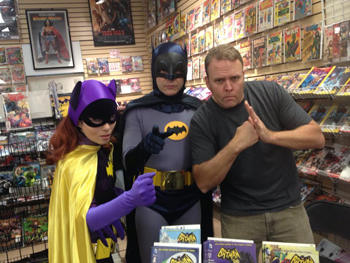 Last night, Earth-2 Comics in Sherman Oaks hosted a party in honor of Batman ’66 writer Jeff Parker. As part of the festivities, they held a trivia contest about the classic television series, and so we’re going to share the questions with you here. The contest is over, but perhaps you’d like to share your answers on the Facebook page!

But beware, Bat-fans — nobody loves Batman the television show with the passion of Carr D’Angelo, the owner of the Earth-2 Comics Emporiums. He knows this stuff. He labored over these questions. He’s going to make your cowl hurt.

Or at least offer a fun diversion for a few minutes!