Everybody knows the magical Land of Oz, and creators have done many revamps, updates, and reimaginings of L. Frank Baum’s famous imaginary place. You might have even seen some straight adaptations. It’s rare that creators dig deeper into the works of Baum to find a new gem to polish. Though the characters of Trot and Cap’n Bill did end up in Oz for a bit, they actually started out in their own separate series of magical underwater adventures.

Wait a minute — it just occurred to me that this means there’s a Baumverse.

Where once Cap’n Bill was a stereoytpical crusty old sea captain, the character has now transformed into a slightly mangy one-eyed cat adopted by Trot. The two love surfing the California waves, watched over and watching over Trot’s Vietnamese grandfather, suffering from dementia. Those elements alone would be enough for an engaging drama, especially when Trot’s grandfather wanders off.

But after being grounded for taking her eyes off her grandfather, Trot sneaks out with Cap’n Bill to continue surfing. They encounter the biggest wave they’ve ever seen, and get pulled into a battle between Sea Sirens and Sea Snakes. It’s only the panicked heroism of the drowning cat that turns the battle in the Sirens’ favor.

Being inspired by Baum, of course there’s a way for Cap’n Bill to speak English, and a magical adventure begins, one that brings Grandpa into the experience, too. 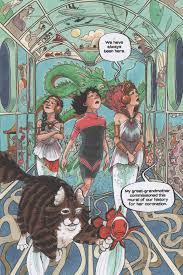 The story has a couple of clever turns, and every page Lee delineates is a visual feast. Combined with Chu’s writing, Sea Sirens reflects its influences while feeling original. It walks in two worlds, and I don’t mean California and the undersea kingdom. It’s also like reading a classic storybook and a perfectly modern story. Though it’s whimsical, it’s honest. And while I’m really not its target audience, it’s fun — and a sequel story, Sky Island, is due for release in June 2020.

Though I’d seen artist Janet K. Lee signing at Comic-Con 2019, I actually picked this up last summer at the Collector’s Paradise North Hollywood grand opening. I wish this book had been around when my daughter was 9 or so, because I know she would have eaten it up. Maybe she still will. 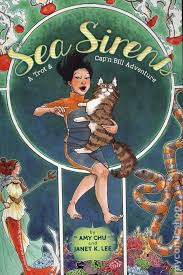