If you’re still surprised that Warner Brothers made Watchmen, if you can’t believe that some of the best animated projects featuring DC characters are happening now — in short, if you get down on your knees every day and thank the lord you’re a fanboy in these times, you need to thank one of its chief architects: Gregory Noveck, Senior Vice-President of Creative Affairs at DC Comics.

He’s not a miracle worker, but he’s a tireless one, touting DC properties to the movers and shakers and fighting to keep their integrity.

After years of admiring his work, I finally got the opportunity to sit down with Gregory at Wonder-Con this year, and prove that yes, he is first and foremost one of us.

Since Comic-Con is just a few days away, with the world premiere of Green Lantern: First Flight, it seems a perfect time to run our conversation…

Derek McCaw: Essentially, you are the intermediary between DC and getting things like Wonder Woman done, and the movie adaptations…

Gregory Noveck: I cover for DC Comics, I cover everything from film, television, animation, video, online…if it moves and it’s based on our stuff, it crossed my desk in some way.

Derek McCaw: Is the job everything you thought it would be?

Gregory Noveck: As a fan who grew up reading this stuff? They pay me to read comic books? I get to make them into TV shows? That’s awesome. I’ve got nothing to complain about.

Derek McCaw: What’s been the hardest part of the job? With Green Lantern coming up next, was it harder to push that as opposed to Superman, Batman or even Wonder Woman?

Gregory Noveck: Naturally, when you’re talking to anyone who’s job it is to sell product, they want stuff with the biggest brand name. So look at our stuff – it’s Superman, Batman, Justice League, you have an easier time saying, hey, let’s do this one!

Especially when you’re talking about PG-13. When we first started talking about doing this line of (Direct to Video) movies, there was no certainty that it would work. The model had been, do stuff for kids and hopefully the fanboys show up, too, and that’s a bonus. 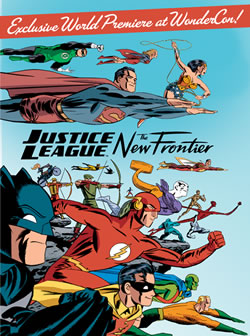 Then that started to not work for a whole host of reasons. Not only for us, for Warner, for all companies. We’d been saying for a while that look, the fanboys are there. The fans want to see this stuff. When I started at DC, one of the first things I said was, look, I’m thirty-three years old – okay, I’m a little older now – and I’m a fan. I want animation. I want to see animation that’s geared to me.

I and many other voices in different divisions coincided. And we said let’s take a shot, let’s see what happens if we do something PG-13, that’s more adult and more geared to the core fan that’s going to appreciate it. And it hit.

Sure, it’s a little harder to convince a team that’s going to put a lot of money up on something like Green Lantern, which isn’t a proven commodity. But what you can say is, look, what we can guarantee is that the quality will be there. If you liked Doomsday, if you liked Wonder Woman, Green Lantern is going to be just as good if not better. We’re going to maintain that quality and it’s going to be frikkin’ cool, so no one will be ashamed. (laughs)

Gregory Noveck: Oh, you noticed that?

Derek McCaw: I can remember being here at Wonder-Con and hearing you talk, maybe two years ago, and you saying that one of the things that you really wanted was a Jonah Hex movie.

Derek McCaw: You got there.

Gregory Noveck: Hopefully. I never say I’m done until I’m sitting here (with the press) and it’s about to be screened. 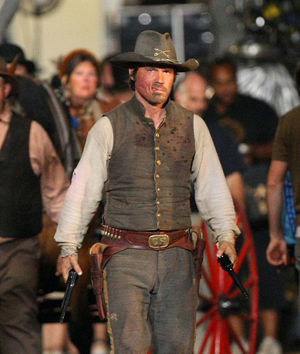 So, that’s looking very very good. We have a great director, a phenomenal script and a wonderful actor in Josh Brolin. That’s the thing – Warner Brothers, if they wanted to, could just make a living making Batman after Batman after Batman, throw in a Superman every now and then.

To their credit, they’ve come come to understand that there’s a wealth of material in the DC library, and they want to do it. Whether it’s Watchmen orJonah Hex or Batman, they get that it’s there and they want to figure it out and make the best version possible. Let’snot make crappy versions.

I hear a lot of frustration from the fans, why don’t you make this movie? Why haven’t you done that character or that character? It’s not that we haven’t thought about it. You know what, we’re not that dumb. There are a lot of fans in positions like mine. Of course we’ve thought about it. I try not to talk about development because you don’t want news to get out there and get fans excited and then nothing happens. And the answer is as simple as, we’re just not ready on the script yet. But fans never accept that.

Derek McCaw: So I can’t ask, which one would you like to see? 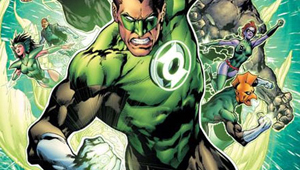 Other than that, you know, I’d love to see a Wonder Woman theatrical. I’d love to see more off the beaten path stuff – I was a Warlord fan as a kid. I love titles like JSA. Even just to pick out an individual character, I’d love to see The Atom. I don’t know what the Hawkman movie is, but it could be very cool.

Derek McCaw: So you’re involved in the Preacher adaptation?

Gregory Noveck: When it was originally set up at HBO, yes, but since then it’s reverted back to Garth Ennis. We still publish it, obviously, but it’s his baby.

Things like Fables , I’m very passionate about television. Transmetropolitan — it would be my dream to do a TV series.

Gregory Noveck: We’re on two tracks. On the one hand we have this line of DC Universe animated movies, geared to the core fans. We’re doing big-budget animated movies that people get psyched about. If people keep showing up, we’re going to keep making them.

Then on the TV side we have Batman: The Brave and the Bold, which is doing very well for us. Creatively, it’s very very successful.

Derek McCaw: What about the future of the DC Universe line? When it was first announced, you talked about things like The Judas Contract and I’ve heard rumors of Kingdom Come.

Gregory Noveck: On Kingdom Come, look, when we talked about the DC Universe animated line, we wanted to do Kingdom Come. But that we will only do if we can actually replicate Alex (Ross)’s style in a reasonable way. I don’ think the fans would want a 2-D animation style, or a bad photorealistic style. I don’t think they’d want a live-action version, either. I think they’d want that epic kind of thing.

The script is kind of obvious, you could just distill the book. But it’s partly the technology. Could you do it? Sure, if you want to spend two hundred and fifty million dollars, no problem. If it costs us more to do it but it’s still reasonable with the technology, then of course we’d do it. It’s a natural. 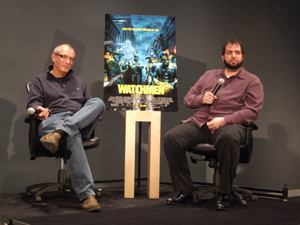 The Judas Contract is a tricky one, because I’d love to do it. I tell the fans at virtually every convention, when you’re polled, if you want Teen Titans, tell ’em. We put out this poll and inevitably, it’s at the bottom of the list.

Derek McCaw: As a fan, what non-DC property would you want to see adapted?

Gregory Noveck: I really like Neil Gaiman’s run on 1602; I thought that was pretty cool. I will say, I’m going to admit in public, that one of the first comics that I bought was Dazzler #1. So I’ve been partial to Dazzler for a long long time. I used to follow the weird stuff, like the Pacific Comics stuff. Jon Sable, that would be pretty cool. Grimjack, Elric…those are the ones that I’d really like.

It’s a DC property now but it wasn’t at the time…I was a big fan of Whilce Portacio’s Wetworks. Until it took six months to get an issue. Then I kind of lost interest.

Derek McCaw: Does any of that affect your job? Delays in publishing make it harder to pitch?

Gregory Noveck: Yes and no. Generally I try really hard not to shop a property until we have some issues in the bank, so I have something to show filmmakers. Not only that, you want to know editorially where it’s going. You don’t want to run out with issue 1 of something that you think is one thing and then it gets delayed or it turns out that this is something completelydifferent.

I could sell it off a proposal, but I think that’s a mistake. Because a proposal changes, or any writer, as he writes his script it becomes something different. He may find an idea he didn’t think about before, and that could be even better.

We don’t know what Gregory will be pushing for next — DC Universe Animation announced Superman/Batman: Public Enemies — but we do have every bit of faith that it’s going to be the best he can help to make it.