(originally published in the July, 1976 issue of Donald Swan’s legendary fanzine Once Upon A Dime)

Though his own courage shortened his career in comics, Jackson Whitney had a keen grasp of what the burgeoning superhero field would need. In the very first Commander Courage story, “The Origin of Commander Courage,” Whitney had fleshed out polio-stricken junior high school teacher Jefferson Dale’s supporting cast. No mere crutches these, the staff and students of Nathan Hale Junior High would each and every one prove to be crucial to the mythos of Commander Courage.

None moreso, perhaps, than Alexander “Dusty” Dale, Jefferson’s nephew and ward. Despite the already popular presence of figures like Robin, The Boy Wonder, in Whitney’s friend Bob Kane’s strip Batman, the doomed but brave comics creator originally intended this all-American boy to be just that: an all-American boy. Red-blooded and true blue, Dusty Dale was something every schoolboy could aspire to be, and I don’t just mean an Eagle Scout.

Devoid of superpowers, Dusty had heart. Ignorant of his uncle’s heroic secret identity, Dusty still fought the good fight on the home front by example.

It’s quite likely that that very example led to the extreme scarcity of the third issue of Commander Courage, for that featured the classic story in which Dusty spearheaded the Nathan Hale Junior High war paper drive. What kid could hold onto that comic book when Dusty had made it clear that saving comics was just playing right into Axis hands? Our boys in Europe and the Pacific needed that paper.

When finally, nine months after the strip’s creation, Whitney finally gave in and turned the youth into another teen sidekick in the superhero canon, it was perhaps a bit of wish fulfillment on his part. A justification, if you will, of the artist’s desire to fight for his country himself, not just with the scathing power of pen and ink.

For of course, Liberty Lad would prove to be Jackson Whitney’s last creation, an act of pulp patriotism to inspire young men everywhere just before Whitney became a doughboy and fell lifeless somewhere in the Forests of Ardenne.

As such, what was done to Liberty Lad by small-minded men is nothing less than a crime, a dark moment in the comics industry’s past that sadly, few seem to care about today.

In late 1941, comics were still seen as something for kids, though many adults did read them. But they had an innocence, reflective of the time and America’s willingness to still see the best in humanity in the face of great evil. Jackson Whitney had that innocence, too, and poured it into Liberty Lad.

By now, the origin of the fair-haired streak of liberty has almost become the stuff of cliché. And indeed, in later years, Julius Schwartz would borrow heavily from Whitney’s classic story to allow Wally West to become Kid Flash, though to this day he denies the homage.

The story refers to “the dark winter of 1942,” clearly meant to resonate with the anniversary of the day Dusty lost his father at the treacherous attack on Pearl Harbor. The plucky orphan visits his uncle at the Liberty Bell museum, where he finds the older man has recreated the very situation that gifted him with the “Mega-will” that makes him Commander Courage.

Meaning to provide Dusty with some inspiration, Jefferson Dale intones the oath he had taken on December 7, 1941, when lightning strikes twice!

The Liberty Bell tumbles from its moorings, causing Jefferson to spill the Indian Shaman Waters he carries with him at all times in memory of his Native American friends. Mixing with the electrical charge of lightning and amplified by the conducting power of the Bell, the water splashes onto a frozen Dusty Dale, who suddenly finds himself possessed of the quasi-mystic Mega-will.

(Purists will note that this is not an exact recreation of Jefferson’s original transformation; perhaps Jackson Whitney felt that the presence of the actual Shaman Mystics a second time would have been too coincidental. Alas, we will never know, but it seems like a prudent choice on his part and thus, a safe conclusion to reach. Besides, comics creators rejiggered origins all the time, ignoring elements they found difficult to revisit. Witness Jack Cole’s modest retooling of Lev Gleason’s original red and blue Daredevil within six months of the character’s first appearance.)

At any rate, now armed with the same abilities as his uncle and soon to be superhero mentor, Dusty Dale dons the famous star spangled top and trunks of Liberty Lad for the first time.

Wait a minute. Trunks, I said? But we know Liberty Lad, and he wears tightly cut breeches, not trunks, you say. 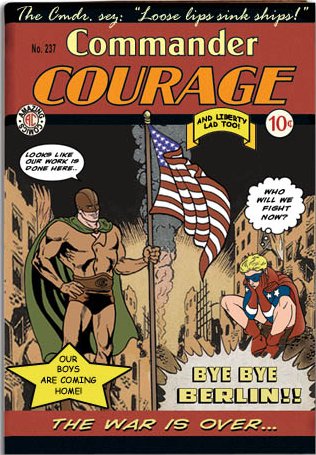 Prepare yourselves for a shock. Up until 1953, Dusty Dale went bare-legged, just like a few other boy wonders. It was only the terrible but understandable cowardice of the editor at Amazing Comics, Delmer McNeal, that caused the change. So deep was his shame that any comics reprinting pre-1953 stories corrected the art to bury Liberty Lad’s original costume.

The public considered comic books to be harmless throughout World War II, even useful outlets for juvenile imagination. But as the Cold War rolled over the nation with its icy grip, citizens looked to find the enemy within. And where they looked, they found four colors for a dime.

By all accounts, McNeal was a genial if not particularly creative man. Certainly nobody had any unusual beef with him. If he overworked his staff, it was only because that was the industry norm, not because of any particular toughness on his part. He edited comics, and as far as McNeal was concerned, comics don’t make waves.

When comics turned darker in the late forties, McNeal was happy to follow the trend, altering even the adventures of Commander Courage and Liberty Lad. The misguided but still fascinating Crypt of Courage dates from this period.

Gruesome horror and explicit violence ran red through the pages of this so-called children’s entertainment. Some publishers tried to have their cake and eat it, too. For instance, the classic Crime Does Not Pay only half-heartedly sold its title message; readers knew that the mob guys featured in its pages lived pretty well until Johnny Law caught up with them.

But after a couple of years of this macabre trend (even The Marvel Family’s Tawky Tawny fought and fatally impaled a were-tiger), someone who didn’t think that comics were the cat’s pajamas was bound to notice just what was going on within their covers.

That someone, of course, was Dr. Frederic Wertham, who linked crime and horror comics to an upswing of juvenile delinquency and childhood psychological disorders in his book, Seduction of the Innocent.

Read Part Two of this classic article, featuring the terror of Estes Kefauver!

(Once Upon a Dime was a website created in 2003 to tie-in with Mark Hamill’s directorial debut, Comic Book the Movie. Though written by Derek McCaw, this article was originally attributed to Donald Swan, Hamill’s character in the movie.)