The greatest heroes of World War II are… not quite what they used to be.

In the midst of the pandemic, the CW’s Arrowverse shows have delayed ending their seasons (some filming hasn’t been completed). Instead, the CW will be re-running “Crisis on Infinite Earths.” There’s one smart reason for that — at the very end, there’s a brief glimpse of the new Earth-2, featuring Stargirl. And that series is ready to launch in May.

Delayed by several months, the show will debut on DC Universe Monday, May 18, and then show on the CW Tuesday, May 19. At least four episodes will follow that pattern — and likely be slightly edited down for length on the CW. Maybe it’s a plan to entice people to the promising yet troubled DC Universe. Maybe it’s that Stargirl (not to be confused with the Disney Plus movie) is a series that fits in tonally with the CW — more so than Titans, Doom Patrol, or our beloved Swamp Thing.

But it’s not just about the legacy of Starman (here Sylvester Pemberton, played by Joel McHale) being passed to Courtney Whitmore (Brec Bassinger). The poster released by DC Universe promises that other teenagers will pick up the mantles of the Justice Society of America. 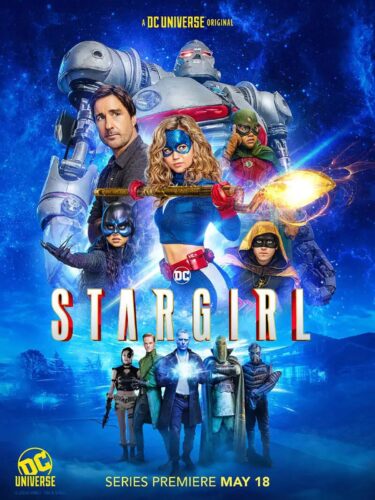 It looks like a promise of the Injustice Society as well. There’s a new Doctor Mid-Nite, a new Wildcat, and a new Hourman, all wearing costumes that are reasonable facsimiles of the comics. From the Injustice Society, that’s Tigress, Brainwave (though I was hoping Per Degaton), the Icicle, and Sportsmaster (who Courtney fights in the teaser above).

To the left of Sportsmaster, that has to be Doctor Fate, and while it hurts me that the show portrays him as a villain, it’s also been a modern comics take that the Lord of Order who inhabits the helmet, Nabu, doesn’t always have humanity’s best interests at heart. UPDATE: Chuck Serface, aka He Who Schools The Zorlac Regularly, informs me that it’s actually Dragon King.

And if you understood ALL those references, you’re ready for Stargirl. And let us not overlook Luke Wilson playing Courtney’s stepfather, Pat Dugan. The poster also shows us his mech, S.T.R.I.P.E., which allows him to keep tabs on the new Stargirl remotely, after he’s grown a little too long in the tooth to fight alongside her under his original identity, Stripesy. Catch a moment of that realization in this teaser — labeled “Not You.”

Just for a little more background, in comics, Sylvester Pemberton and Pat Dugan were the rarest of rare superhero teams — a switch on the kid sidekick phenomenon that swept through the Golden Age after Robin appeared. As the Star-Spangled Kid and Stripesy, the young Pemberton was the main hero. They teamed with other heroes as the Seven Soldiers of Victory (sometimes known as the Law’s Legionnaires). It wasn’t until Pemberton’s return to comics in the 1970s as part of the “Super Squad” that he officially joined the Justice Society of America. You can read those stories in the recent DC hardcover All Star Comics: Only Legends Live Forever.

Created by Geoff Johns in tribute to his sister, Courtney Whitmore first appeared in a solo book, Stars and S.T.R.I.P.E., which DC really should reprint again! 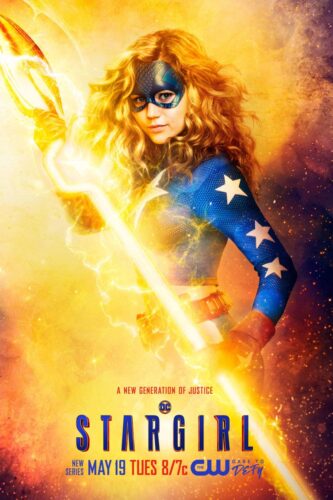