When Obi-Wan Kenobi uttered those deathless words, “you will never find a more wretched hive of scum and villainy,” he was talking about the spaceport town of Mos Eisley, and not Hollywood. But for the month of April, the heart of Hollywood hosts the Scum & Villainy Cantina, a pop-up bar experience aimed at giving you the feel of partying in a star system not very, very close to our own.

Tickets went on sale months ago and sold out fairly quickly, but the Cantina’s website hints that they may extend and offer more seating packages, which can include a t-shirt, a tumbler, and a commemorative coin. If you don’t want to take the chance of an extension, the bar does take walk-ins every night from 11 pm to 2 am. But the real question you must ask yourself is… is it worth it?

In truth, the place walks a fine line as a fan experience. Built inside what was recently a bar called “Loaded,” at 6377 Hollywood Boulevard, it goes for that speakeasy vibe. Entering through an alleyway stairwell, at first it looks like any other club. But then you pass through a hallway with spinning lasers welcoming you, and step into a bar that has done some decent theming. While it has to be a somewhat generic outer rim bar, with some props that could fit in either a trek or a war, it still has the feel of a place where fans would want to hang out — and that’s really what we paid for.

With some day-glo colors, deep lighting, and liberal use of small fog machines, the management provides a baseline for fan ambience, but like any party, it really depends on what fans bring to it. On the website, the owners encourage cosplay, and prop blasters seem to be allowed, once security has had a chance to look them over. Our seating at 6 p.m. was a little tame in the cosplay department, though some members of the 501st Legion did show up. 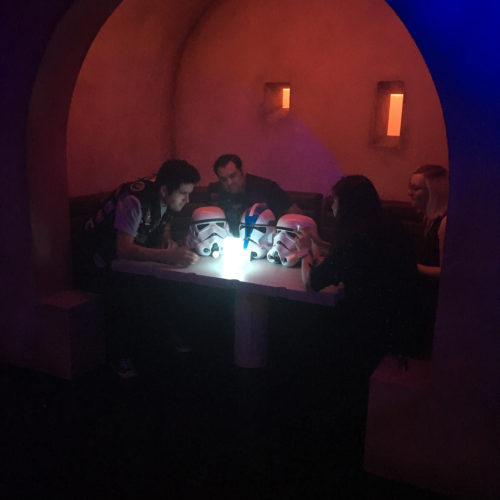 However, the line for the 8 p.m. seating was almost completely costumed, so that may be more of a party. Who knows how wild 11 p.m. walk-ins might get?

The reservation package included two drinks, though you could certainly buy more. For a themed bar, the selections were reasonably priced, but not Star Wars specific. If you needed to soak those drinks up, the menu turned over to offer some bar food, heavy on the carbs and the queso.

Music-wise, yes, they did play a short excerpt from Figrin D’an and the Modal Nodes, but not until the end of the two-hour seating. The rest of the time was taken by a mixture of current dance standards and well-known science fiction themes. Right at 6 p.m. the bold tones of “Also Sprach Zarathustra” rolled over attendees, but once Queen’s “Flash Gordon” played, you knew you were among friends.

If this goes well, it’s likely they’ll try it again, and I can only think it would get better in version 2.0. To be fair, we attended after only one soft opening run through. It’s going to get smoother throughout April. Still, the staff was friendly and welcoming, and it’s already a fun party. When I was a kid, I never dreamed that something like this could be so mainstream.

So is it worth it? It may not feature aliens from a thousand worlds, but the Scum & Villainy Cantina is still a decent event. It’s not a wretched hive; it’s a place for our people to meet and celebrate.