Director Taika Waititi (What We Do In The Shadows) promised us something different. Though Thor (Chris Hemsworth) has always had the capacity to be funny, being portrayed onscreen as somewhat boorish but noble, this takes it to the next level. Yet it also isn’t sacrificing any Asgardian politics or adventure — the single smartest thing it does is introduce Hela (Cate Blanchett), followed closely by acknowledging that crazy Kirby headgear. No, wait! The single smartest thing it does is introduce the Grandmaster (Jeff Goldblum), brother to The Collector from Guardians of the Galaxy! Or is it just going straight up into putting Thor down into the vague plot of Planet Hulk? I can’t decide. It’s just great.

I really liked Kenneth Branagh’s first take on Thor. I thought Thor: The Dark World was a bit dour and didn’t balance the humor well, plus it wasted Christopher Eccleston as Malekith. Somehow I think this will get it just right. I also dig the variation on the logo. 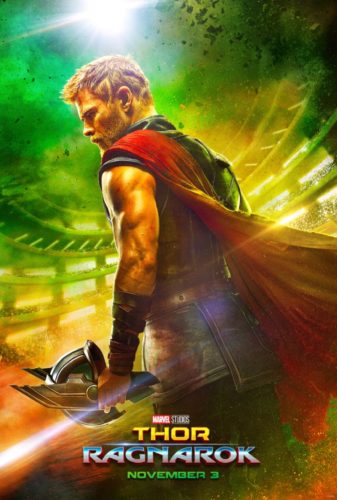