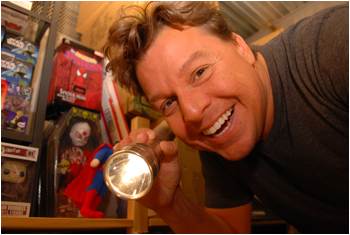 Tomorrow night, The Travel Channel launches a new series aimed straight at the heart of fanboys and fanwomen everywhere — THE TOY HUNTER.

Straight from the adventures of Hollywood Heroes owner Jordan Hembrough, the series follows him as he searches the country for hot collectibles and childhood favorites. It launches Wednesday, 8/15/2012 at 10 p.m. (ET/PT) before settling in next week Wednesdays at 9 p.m.

In order to lure us into a conversation, The Travel Channel sent a list of Hembrough’s Top 15 Money Makers — which proved the guy is on the level as a toy dealer. The list included the original Boba Fett wax sculpt, a James Bond die-cast car, an original Chatty Cathy, and other items to make your inner child reach out. Did you even know there was a proposed set of Chewbacca’s family?

Sure, he has the chops, but did the guy have heart? After talking with Hembrough yesterday, the answer has to be yes. Thoughtful and passionate about what he does, he obviously has his dream job and isn’t going to take it for granted. He has held toys that some of us have only wished we could even see, and has bid them farewell. And yet he hasn’t lost any enthusiasm. Will it translate to television? I hope so, because Jordan has me convinced I have to watch his series.

Derek McCaw: I’m just fascinated by your list of top 15 valuable toys. How many people come up to you and say, “oh, if only my mom hadn’t made me throw away the box…”?

Jordan Hembrough: Let me tell you something. If I actually had a dollar for every time someone said that, I wouldn’t be on Travel Channel. I would OWN Travel Channel. (laughs)

Derek McCaw: Glad we got that one out of the way, then. How did you get interested in toy hunting?

Jordan Hembrough: I was actually a collector since I was young. My bedroom was adorned with Star Wars figures and Mego dolls, you know, the superheroes and everything like that.

So I’ve always been a passionate collector, and when I got into college, I got a job working for a company called Starlog. They had been doing a magazine for a long time, and I was hired on as a buyer for their chain of retail stores, and that was really what started my super-professional career. 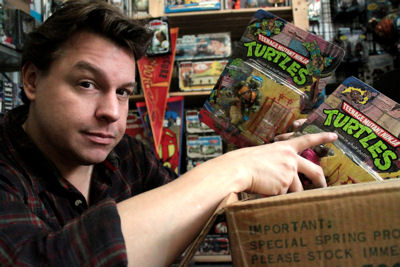 Jordan unpacks a box of the original “Heroes on the Half Shell” from Teenage Mutant Ninja Turtles.

Derek McCaw: I know the magazine. I didn’t know they had stores!

Jordan Hembrough: You know what, it was thirteen stores, primarily East Coast. So don’t feel so bad.

Derek McCaw: Did your passion for collecting change once you became the buyer and the guy that was the wheeler-dealer?

Jordan Hembrough: It’s interesting. My passion didn’t change. I think what happened was that my priorities changed. Once I decided that this has to be business, and once I took that decision and moved forward with it, I realized that once I get something I’m going to have to start selling it right now. As opposed to when I didn’t have the business and was working another job, I was basically collecting.

Now, every time I get something in my hands I realize I’m going to have to say good-bye to this. This is how I gain my way through life.

Derek McCaw: Do you have a little ceremony when you have to say good-bye to something you’ve wanted for a long time?

Jordan Hembrough: Yes. I dress all in black. (laughs)

Jordan Hembrough: You’ve got it. Gregorian chants, all that kind of stuff.

Derek McCaw: When you started, that would be the mid-80’s, before eBay. Looking at your list of top money makers, and knowing the ease of sites like eBay, has the hunt changed and lost its flavor for you? 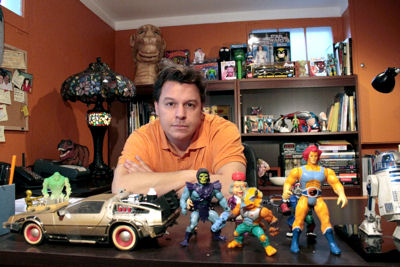 What toy line is that lamp from?

Jordan Hembrough: It’s funny. First of all, that’s a fantastic question, Derek. The hunt hasn’t lost its flavor at all. The game has changed a little bit with eBay. I think, really, sellers are becoming more educated, and that’s for the most part a good thing. They’re looking at internet auction sites and they’re looking at what these toys are going for.

However, right now I’m coming across something that I never came across before, and with the advent of internet auction sites it’s making sellers – they have the ability now to compare pricing. And they say to me, “well, Jordan, you offered me ten dollars for this toy and I can see it’s selling for thirty dollars on such and such website.”

I need to contend with that now and let them know that just because someone’s selling something for however much they are, doesn’t mean they’re getting that amount. So you’ve got to keep that in mind. What’s happening now is while overall I do feel good about internet auction sites, it sort of can add a little cog in the works that I’m sometimes not accustomed to.

Derek McCaw: You started your own company, Hollywood Heroes, and obviously, the Starlog stores sort of faded away, but when did you decide that you would strike out on your own?

Jordan Hembrough: The funny thing is that because the company shut down slowly, because I was the buyer I knew what was happening. I was able to get the inventory back to the corporate office and I bought it at an auction. That’s how I started Hollywood Heroes.

Derek McCaw: When I look at some of the things on your list, like the Ideal Batman “Switch and Go,” the Six Million Dollar Man Venus Space Probe, the prototype Boba Fett wax sculpt… was that the one with the rocket-firing backpack?

Jordan Hembrough: It was actually that protype wax sculpt that came before the backpack. It was the first wax sculpt ever. Because of that, the others could be made. It truly was a one-of-a-kind piece. 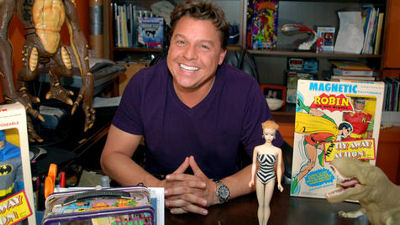 I need that magnetic Robin…

Derek McCaw: You mentioned having Mego dolls, which is a company that kind of defines my childhood…

Derek McCaw: Maybe you can settle an urban myth for me. I know that the Mego offices had a fire. So is it true that there are still Mego production runs that we don’t know about for sure. Have you ever encountered something that made you stop and say, “wait a minute, that was only a rumor that that existed, and now I have found it”?

Jordan Hembrough: Uh… yes. (laughs) You know, the funny thing is that we do do an episode of the show about Mego. And I can tell you that if you were a child of the 70s and you did collect Mego, you will absolutely want to be glued to the station, because we do uncover probably one of the rarest Mego dolls ever known.

Derek McCaw: You can’t tell me now, because you want me to watch!

Jordan Hembrough: I can’t tell you, but I can tell you that you will want to DVR it and watch it over and over again.

Derek McCaw: In your quest for toys, have you ever felt like you found Excalibur and pulled it from the stone?

Derek McCaw: Is there still a toy out there that you haven’t found, that’s your holy grail?

Jordan Hembrough: Yeah. It changes every year basically, as my priorities change and I get older, I realize I probably won’t be able to find that. Right now I’m really actively looking for an IDEAL Batman Utility Belt from the 1960s. In the box. In the box. It’s a rare toy; it goes for about $16,000 in the box. 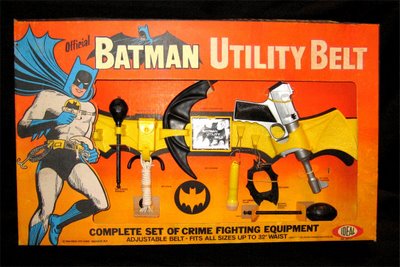 Can anybody help Jordan out?

Derek McCaw: Do you have dreams about action figures you know couldn’t possibly have existed, but you find them?

Derek McCaw: One that I didn’t see on your list but I know has to be a find is anything from the original IDEAL Captain Action line…

Jordan Hembrough: Love those! Make sure you tune in!

Derek McCaw: Of course you have an episode of that. He is back in Toys R Us…

Jordan Hembrough: I’ll tell you a funny story about that. The guy bringing back Captain Action is a guy named Ed Catto. Ed lives in my town in Ridgewood, New Jersey.

Derek McCaw: Do you guys compare notes at all?

Jordan Hembrough: We’re trying to get together. The funny thing is that I saw his photo when we first got introduced on-line and I said, “wait a minute, I’ve seen this dude in the coffee shop!” And he said, “I’ve seen this dude walking along the sidewalk!” We’ve actually seen each other in our town but never made the connection.

And now I’m out filming and Ed’s running around (with all the various Captain Action projects), but we’re actively trying to get together, sit down and compare notes with each other and basically have a geek-fest. That’s something we will do! 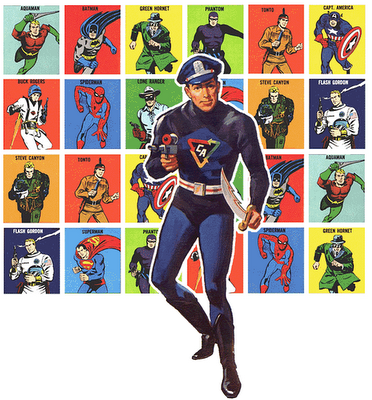 Just to taunt myself…

Derek McCaw: You have a Mego episode, you’ve implied there’s a Captain Action episode. What other episode would you really recommend, besides saying watch all of it?

Jordan Hembrough: I have an episode where, hmm, let me try and tease you. I have an episode that will reach “Jurassic” proportions. In another episode I give a truly “heroic” episode in finding a toy, and that episode will turn out “super.” And one episode coming up you will go bat-crazy. There’s your teaser.

But I do want you to tune in because, you know, this truly is a dream come true for me, and I’m very, very fortunate to be working with the people at the Travel Channel. If I had to sum up the show, I would say it’s a warm fuzzy memory. I hope it’s going to be bringing back a lot of memories for people, and they’ll be able to bring their children in on watching the show as well. It could be bridging this generation gap through toys, and that’s really what I’m hoping to accomplish.

Derek McCaw: Do you think you’ve got enough to do more than one season?

Jordan Hembrough: I absolutely know right now that I have enough to continue. Whether or not it will is totally up to the fans, and I really hope they come out to support the show. I’m looking forward to doing it for years and years and years.

We may be, too! Check out Toy Hunter on The Travel Channel Wednesdays at 9 p.m. PT/ET.