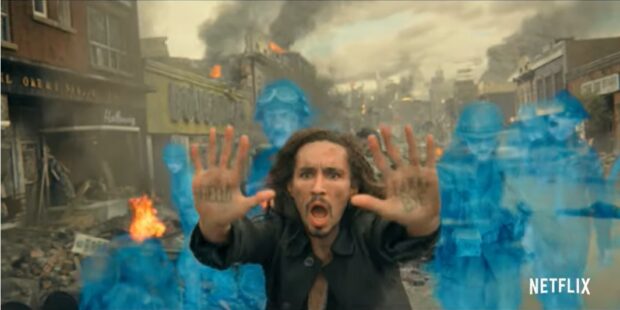 Wondering what happened to the Umbrella Academy after last season’s cliffhanger? Netflix wants to give you a head start and answer all your questions. The network wants to, but really, this opening scene will just draw you on to the next scene, and the next, and… this is a heck of a way to open the second season. At least everyone is there.

After warning his family that jumping back in time to avoid the apocalypse was risky, Five (Aidan Gallagher) makes it to 1963. He’s the last to arrive, as some of the family were sent back to 1960. Vanya the White Violin (Ellen Page) retains full control over her power. Klaus aka Seance (Robert Sheehan) has apparently started a cult (why not?), while his late brother Ben the Horror (Justin H. Min) seems to have adjusted to death quite well. Allison the Rumor (Emmy Raver-Lampman) has her powers back, while Luther (Tom Hopper) and Diego (David Castañeda) remain Spaceboy and the Kraken.

Does that whet your appetite? The Umbrella Academy Season 2 drops on Netflix Friday, July 31st, 2020, based on the comics created by Gerard Way and Gabriel Bà and published by Dark Horse Comics.