Mark this as #1 in an intermittent series of articles about things that were extremely cool, but the day got away, and then a week later… we still had to talk about it.

Everybody has a handful of movies that they have to stop and watch whenever they pass by it, and when it shows somewhere publicly, they have to go. Big Trouble In Little China is one of those movies for at least Nate Costa and myself. It plays just as well now as it did the first time either of us saw it, and if audiences didn’t get it when it was originally released, it’s certainly influenced decades of action films since.

We’re not alone in our adoration of the film — take a look at some of the comics that BOOM! Studios has done to continue the adventures of Kurt Russell’s Jack Burton. But in this day and age, a film truly worthy of its cult salt needs to achieve one singular honor — a board game. 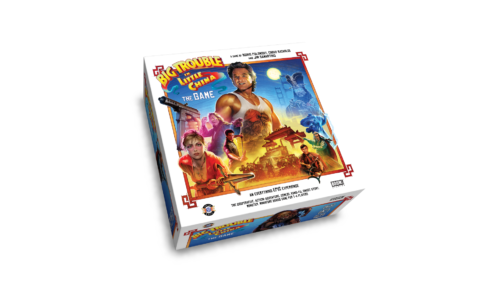 Luckily, Chris Batarlis of Everything Epic and Boris Polonsky of Flipside agree, and as game designers, they’re in a position to do something about it. They’re working on Big Trouble In Little China the game, and for embarrassingly lame gamers like myself, they seem to be designing it so you could even play solo.

Looking at their prototypes for the playing pieces, it wouldn’t even matter what the game mechanics were like; the miniatures and artwork are just cool. It looks like most of the actors have given their likeness approval; only Gracie Law does not resemble the actress who played her. (Honestly, I have no idea how Kim Cattrall feels about her cult status; Russell has gone on record as loving it.)

But so far their description of the mechanics also sounds intriguing — the board flips over from Chinatown to Lo Pan’s Lair. It’s a nice touch also harking back to Egg Shen’s explanation of their journey — the Earth once turned upside down.

Take a look at the miniatures and other prototypes they’ve got for this game, and tell me you don’t want to play it. We’ll be in touch further with the publishers, and hope to bring you more art and information, including (and especially) release date and price point as soon as they become available. Next time there is no way I’ll wait a week…

Here’s the official description from the press release:

“Big Trouble in Little China: The Game” is currently in development and is the brainchild of Chris Batarlis (Everything Epic) and Boris Polonsky (Flipside). The game originated from the designers’ love of the film, and the passion to make a game that would capture the magic and fun of the cult classic. It’s a thematic, cooperative, strategy, miniatures, adventure game that allows 1-4 players to experience the events they remember from the film as well as create new adventures of their own. The game plays in two acts: Act One uses the front side of the game board: Chinatown, while Act Two takes place on the back: Lo Pan’s lair. Players will choose from six characters, each with unique abilities, and will use custom dice for actions, quest tasks and combat. They will also be able to use the communal fate dice, which come with a fun risk/reward mechanic. After completing quests and upgrading their characters, players will move to the back of the board for the big showdown with Lo Pan! Will the heroes stop Lo Pan’s evil scheme in time, or is everything gonna go to hell?