I sense a disturbance… something that tells me that some geek living rooms (or kids’ bedrooms) are about to get invaded by some extremely comfortable Star Wars items. ThinkGeek has created a new combination of pillow and plush toy from Lucasfilm, just in time (hopefully) for peak excitement over The Last Jedi.

Perfect for snuggling while watching Star Wars: Rebels on Disney XD or catching up on The Force Awakens before you hit the theater, the Cutesy Rolls are $29.99 and available now. 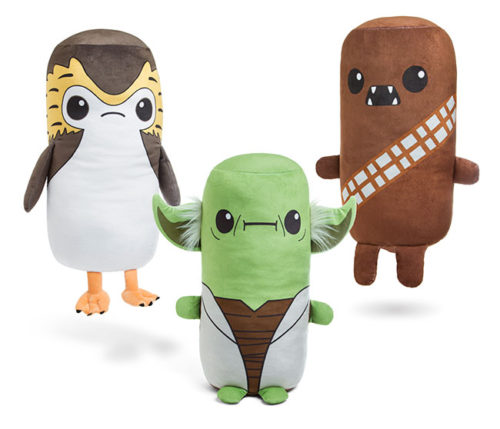 At 19″ tall, the Porg is actually bigger than life-sized, though Chewbacca and Yoda might be a little small. (And if these are all licensed for The Last Jedi, does that mean we’re going to get a ghost Yoda?) Take a look for yourself and see if you don’t want to visit Planet Snuggle. To check them out on the ThinkGeek site, disable your ad blocker so you can see the direct link below or to the right, and tell them Fanboy Planet sent you.