Are you ready for philosophy with your giant monster-fighting action? Rylend Grant aims to give it to you with both, um, giant laser swords? Teaming with Brad Warner (who spent 10 years with Tsuburaya Productions, so he’s got major cred), Grant brings us an interesting take on my favorite genre in childhood. I like his work anyway, but you throw in kaiju and I have to take a look. Hitting comic book shops in August, Suicide Jockeys will be added to my list.

Ten years after a catastrophic mission gone awry, Denver Wallace, leader of the Suicide Jockeys – a poor, usually drunken, almost certainly mentally ill crew of monster-fighting, tank-and-aircraft-piloting suckers – must pick himself up off of the proverbial and literal floors, slap his estranged, desperately-fractured team back together and right what once went wrong.

Creator Rylend Grant describes Suicide Jockeys as diverse cast Tokusatsu for the contemporary action movie fan. It’s essentially Voltron meets The Fast and the Furious… with an extra dollop of heart and soul.

The film comparisons flow freely and easily from Grant, a screenwriter by trade, with a decade’s worth of experience penning smart, character-driven action movies for the likes of JJ Abrams, Ridley Scott, Justin Linn, F. Gary Gray, and John Woo. 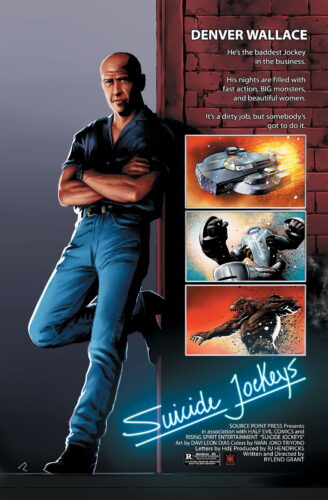 Suicide Jockeys is a Tokusatsu comic through and through. Inspired by classic Japanese action television like Ultraman and Super Sentai, Grant teamed with Toku Expert Brad Warner, who previously worked for over a decade in Japan as an executive for Tsuburaya Productions.

“Brad is our very own Tokusatsu historian/expert. While I work to make sure Suicide Jockeys appeals to a hungry American action movie audience, he’s making sure diehard Tokusatsu fans will have an authentic experience,” says Grant.

Warner and Grant also happen to be ordained Soto Zen Buddhist monks. Grant actually once taught Mike Tyson how to meditate. Warner is the best-selling author of books like Hardcore Zen and Sit Down and Shut Up.

“Our Zen practice is a major influence on Suicide Jockeys. It’s a big, poppy, action thrill ride, obviously… but we’re also wrestling with some of life’s big and hairy existential questions here. We’re just doing it in a fun, heightened way,” says Grant.

Suicide Jockeys will also feature variant covers from Fabio Alves and Edson Ferreira who were both nominated for Ringo awards for their work on Grant’s much lauded superhero noir Banjax. Banjax made a dozen critics ten-best lists in 2019 and was nominated for a total of 4 Ringo Awards including Best Series alongside Bitter Root and Something is Killing the Children. 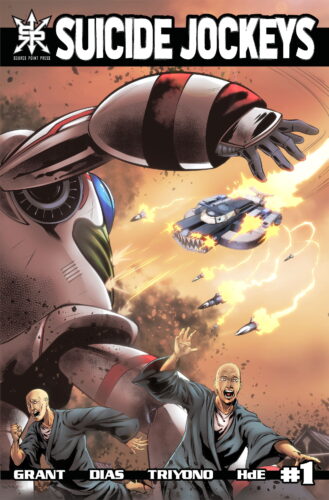