Blood coursing with nanites that have changed him utterly, a super-powered soldier struggles to regain his identity, his independence, and his sense of right. He’s Bloodshot, and the Valiant Entertainment comic book hero has Vin Diesel changing his tune from “I am Groot!” to “I am Bloodshot!”

To celebrate and wisely capitalize on the upcoming Sony Pictures adaptation, Valiant has brought a strong creative team onboard to create a series that will acknowledge the comics that have come before and give new readers a taste of why Sony wanted to make a movie.

Bloodshot: Locked and Loaded will hit stores in September, but to give you a taste of the taste, Valiant will also be releasing a one-shot “first chapter” as part of Free Comic Book Day on May 4, 2019. That should get everybody revved up for Bloodshot in theaters in 2020.

As first revealed on Deadline, Bloodshot, the unstoppable supersoldier trapped in a never-ending war, has arrived! Written by the electrifying Tim Seeley (Revival) and featuring artwork by industry icon Brett Booth (Teen Titans), this tremendous team is crafting a Bloodshot adventure full of badass action, surprising stories…and then some more badass action! Declan Shalvey (Return of Wolverine) will illustrate covers for the series.

Once, he was the perfect living weapon, created to follow orders. Now, Bloodshot works alone, using his lethal skills to protect those who cannot protect themselves. But a mysterious and powerful organization is watching, and they’re not about to let something as dangerous as Bloodshot remain free…

“I don’t feel like I need to reinvent the wheel with Bloodshot,” said Seeley. “What I need to do is tell a BIG, CRAZY story that can only be done in comics, and I need it to be powerful and emotional and relevant in a way only comics can do.” 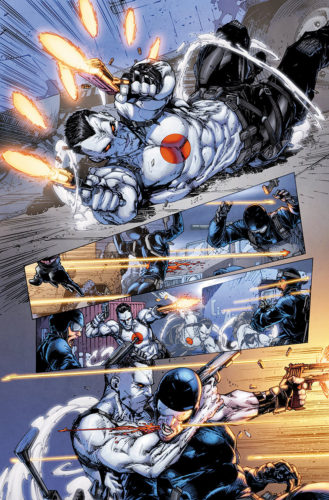 Seeley plans to take a fun and fast-paced approach with Bloodshot. “I want to go back to basics and tell a story about a guy who was made to be a weapon but isn’t allowing anyone to use him ever again. He’s an outcast, an outsider, and he can’t help but use his indestructible body to help people, even though all it ever does is get him in trouble. With great power comes a great big pile of shell casings!”

Superstar artist Brett Booth spoke about how he’s having a blast with Seeley’s exciting script. “I’ve been looking for a project I could really cut loose on,” Booth expressed. “The first issue is pretty nuts. It gets right to the action, which I love, and then sets up the rest of the story. It’s a great jumping-on point.” 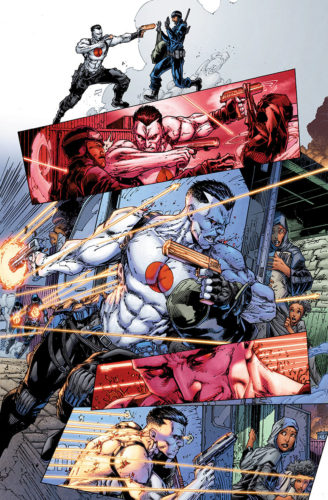 Seeley also explained why Booth’s art is the perfect fit for the book. “His style synthesizes what ’90s comic book artists figured out—how to do big, cool action comics that look visceral and powerful. That melds perfectly with my approach to this book.”

Valiant is set to distribute free copies of a brand-new BLOODSHOT short story by Seeley with artwork by Tomás Giorello and Diego Rodriguez on Free Comic Book Day (May 4, 2019) through participating retailers. The story leads into the new series. 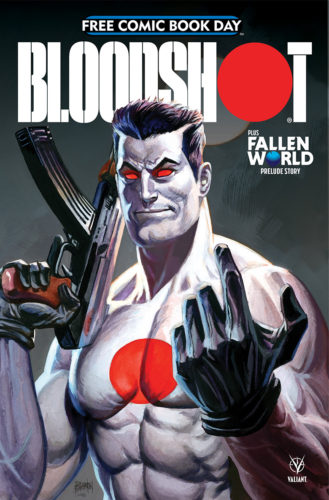