Likely tying directly into Doctor Strange in the Multiverse of Madness, the Disney+ Marvel series WandaVision will stream in just over a month. The first of the Marvel Cinematic Universe streaming series, it aims to more clearly define how Wanda Maximoff (Elizabeth Olsen) may be the most powerful character in the MCU. Able to alter reality itself, she’s trying to create a perfect sitcom life for herself and The Vision (Paul Bettany) who in the movies, at least, should be “dead.”

The trailer also features Kathryn Hahn as Agnes, a character some of us think is actually AGatha HarkNESs, a long-time comics mentor to the Scarlet Witch, and Randall Park returning as Jimmy Woo, Agent of S.H.I.E.L.D. Keep an eye as well on Teyonah Parris as Monica Rambeau, the grown-up version of the character from Captain Marvel. Parris has been confirmed to appear in Captain Marvel 2, along with Iman Vellani as Ms. Marvel — in comics, Rambeau has been known as both Captain Marvel (when Carol Danvers was in outer space) and Photon.

In case you want to do the background reading:

For the first time Wanda used her “Hex Power” to redefine her reality, see Steve Englehart, Richard Howell, and Al Milgrom’s maxi-series Vision and the Scarlet Witch: A Year in the Life from 1985. (There are a few clear references to that in the trailer.)

For the most recent exploration of The Vision trying to live a normal suburban life, though not with Wanda (they split apart long ago in comics), see Tom King and Gabriel Hernandez Walta’s Eisner-award winning The Vision. Though not identical in plot, no doubt the TV series will lean on some of King’s thematic explorations of The Vision as a synthezoid trying to be human.

And to remind you that Jimmy Woo is more than comic relief, read Jeff Parker and a host of other creators’ Agents of Atlas.

While Fanboy Planet is an Amazon affiliate and may receive revenue from purchases made through links on this site, we do encourage you to support your local comics shop. 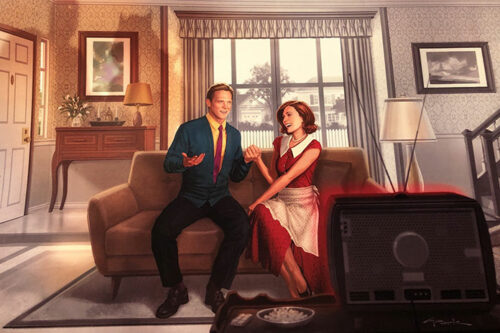