Diving into John Layman and Dan Boultwood’s Chu is like greeting an old friend you didn’t know how much you missed. From the first page, you’re deep in Layman’s brilliant crazy world of food-based superpowers, but without having to know any of the larger science fiction elements that gnawed on the edges of Tony Chu’s life. Tony shows up, but the protagonist here is his sister Saffron. Where Tony was struggling to do the right thing as a cop, Saffron uses her powers for self-interest. And her powers are gleaning psychic information from her dining companions.

And so we begin with a heist, as the second most powerful mobster in town plans to steal from the first most powerful mobster in town. Everyone on the heist team has a code name, and instead of a blueprint or a map, they have a building replica made from an intricately baked cake. As they eat, they memorize the layout. But Saffron picks up that something is going to horribly wrong once the team has a protein-packed dinner served to them.

Yes, it’s bizarre. But that’s the way we liked it in Layman and Rob Guillory’s Chew. Guillory got a little busy with his excellent creator-owned series Farmhand (also highly recommended), so Layman teamed with Boultwood (who teamed with George Mann on Newbury and Hobbes: The Undying, also highly recommended). Boultwood’s style adapts really well to this world while staying its own thing — similar to Guillory’s in that it treads on cartoony without going over the top. Well, except when Layman’s script calls for it.

Because Chu does get silly from time to time, and then deadly serious — the heist ends up being something not for the weak of stomach. And then it’s a family drama, though I suspect that the larger Chu family will stay firmly in the background. Chu starts in a time period already covered in Chew, and it’s clear that Saffron doesn’t want too much attention from her family, just information.

Consider issue #1 an appetizer for greatness. You’ll definitely want to stay for the main course. 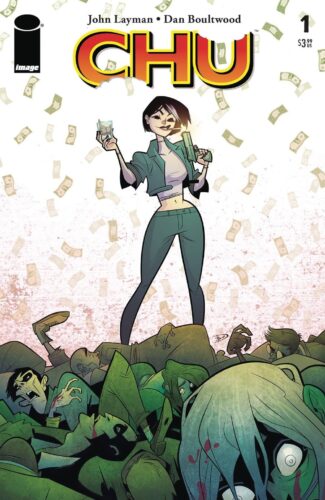 Fanboy Planet is Amazon-affiliated. Purchases made through links here may generate revenue for this site.