The latest installment in the Jurassic franchise opened this past weekend and in all five films there is simply one lesson that the human counterparts in the film simply don’t learn…you can’t control the dinosaurs.

Indeed, the film opens with Jeff Goldblum’s iconic Dr. Ian Malcolm prophesying that at one point we, humans, opened Pandora’s Box and we paid for it. Isla Nublar, home of the now twice extinct/abandoned park, is now under a volcanic threat to wipe out not only the island but all the dinosaurs on it. In Malcolm’s paraphrase, God has given us a second chance to correct nature. But what would be the fun in that?

Fallen Kingdom takes place three years after the incident at Isla Nublar and Claire Dearing (Bryce Dallas Howard) fights with the government to preserve the dinosaurs from the impending volcanic eruption, citing animal rights. Unexpectedly, Claire gets support in her quest by Benjamin Lockwood (James Cromwell), former friend of John Hammond, the creator of the first Jurassic Park. Lockwood, and his aide Eli Mills (Rafe Spall) promise a team on the ground to help transport the dinosaurs to another secure island where the dinosaurs can roam free, away from human civilization. Claire convinces Owen Grady (Chris Pratt) to help.  It’s probably a bad idea, and Owen knows it, but he has a soft spot for Claire and Blue, the velociraptor he trained from infancy — last of her kind, and only coincidentally super-intelligent. 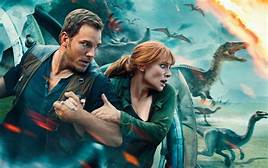 While on the island things of course go awry, as Mill’s motivation to get the dinosaurs off the island aren’t exactly for humanitarian purposes. A side twist with Lockwood and his granddaughter, Maisie (Isabella Sermon), comes into play later, but Lockwood remains unaware of Mill’s ulterior motives in the dinosaurs as well. Without spoiling too much, the dinosaurs, or at least the ones that survived the volcanic eruption, make it to Lockwood’s estate in Northern California and the storyline kicks into high gear. The usual Jurassic nostalgic moments sprinkle throughout.

Audiences will be thrilled to see their favorite dinosaurs on screen again, including the T-Rex who makes his normal show-stopping appearances. Yet the newest dinosaur teased in the trailers steals the show in the evolution of genetically-altered dinosaurs. The Indoraptor is the latest brainchild of Dr. Henry Wu (B.D. Wong), who, like most humans, simply hasn’t learned his lesson. My personal favorite dinosaur from the last film, the Mosasaurus, makes his appearance only a couple times throughout the film, including what is probably the best opening sequence in any Jurassic film.

Coming from a horror background, new franchise director J.A. Bayona takes over from Colin Trevorrow (who still has a screenwriting/producing credit). While plot points don’t always stick, it is clear that Bayona knows how to create a moment on film, building tension through shots which only heighten the suspense. It’s not a horror film, but it audiences will certainly jump out of their seat.

While the new trilogy, so far at least, hasn’t reached the heights of the recent Planet of the Apes trilogy reboot, the series continues to ask questions of genetic mutation and conceived human power and greed. Once Pandora’s Box is already open, you can’t close it. (Thank you, Dr. Malcolm.

Because of how Jurassic World‘s plot was similar to the first film, many people had the assumption that Fallen Kingdom would follow the same pattern with the second film in the franchise. Yes, dinosaurs leave the island and come stateside, but the plot greatly differs from then on and takes some bold new choices. While I personally didn’t agree with every decision made, I applaud the filmmakers, mostly Trevorrow (who will direct the next installment) for having a linear, long story arc for this trilogy of the franchise, in which the payoff will (hopefully) be in the final film. Jurassic World : Fallen Kingdom certainly has its high points and its low points, it will most certainly resonate with audiences who can’t seem to get enough of watching dinosaurs do what dinosaurs do. 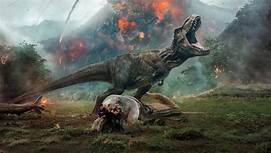 On a sidenote : Universal Studios Hollywood is closing the original Jurassic Park ride (opened in 1993) on September 3rd and after a nine-month renovation will be renamed Jurassic World.