Right now he’s overshadowing Batman, Spider-Man, and anything that Animal Man has been in. You haven’t seen a movie about him, nor seen him on a t-shirt. But kids love him. We’re talking Dav Pilkey’s Dog Man, and he’s proof that kids are reading comics in numbers as big if not greater than they ever have been.

As the industry rolled into Comic-Con International in July, we heard that comics and graphic novel sales were down 6.5%, and a look at the charts reported by comics shops says that Dark Knights: Metal topped sales at just over 200,000 copies per month. But that’s nothing on Scholastic’s print run for the latest Dog Man graphic novel — Dog Man: Lord of the Fleas has a first printing of 3 million.

I’m bringing this up to say once again — and I’m guilty of this — when we talk about comics, our focus is too narrow. DC and Marvel have some great stuff, but the next generation of readers have been going elsewhere for the great stuff that they love. Aimed at young readers, Dav Pilkey’s Dog Man series spins out of Captain Underpants. They’re the comics that the protagonists of the novels write and draw, growing successively more assured as they get older and better at storytelling. It’s meta, but kids don’t know meta. They just know what they love.

And Kid McCaw will vouch — they are fun. He read the first two volumes when they came out, well into DC’s New 52 relaunch, which he also loved. The point is that comics are alive and thriving; they’re just not where you might be used to looking.

Scholastic, the global children’s publishing, education and media company, today announced that it has increased the first printing of Dog Man: Lord of the Fleas to 3 million copies, from a previously announced 1 million copies. Dog Man: Lord of the Fleas, the fifth book in the runaway hit graphic novel series by Dav Pilkey, will be published simultaneously in the U.S., Canada, U.K., New Zealand, and Australia on August 28, 2018. The sixth installment, Dog Man: Brawl of the Wild, will follow later this year with a strict on-sale date of December 24, 2018. The most recent book in the series, Dog Man and Cat Kid, published on DecemDog Man and Cat Kidber 26, 2017, debuted at #1 on the New York Times, USA Today, Wall Street Journal, and Publishers Weekly bestseller lists.

Scholastic also announced today that Dav Pilkey, the worldwide bestselling creator of Dog Man and Captain Underpants series, will embark on a multi-city “Howl with Laughter” book tour across the United States and Canada this fall, appearing at large-scale events and community-wide reading celebrations. To see the tour schedule and for more information, click HERE. 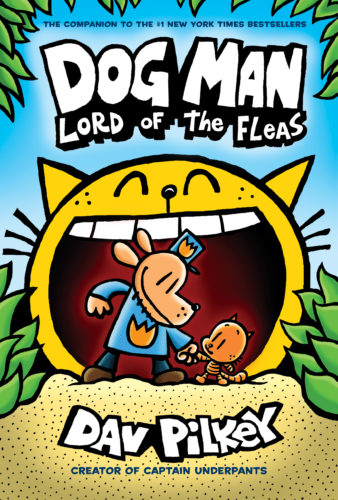 “Dav Pilkey’s books, with their trademark humor and heart, and his story of overcoming reading challenges, continue to inspire children and parents everywhere,” says Ellie Berger, President of Scholastic Trade. “Scholastic is proud to be Dav Pilkey’s publisher. We’ve been overwhelmed by the positive energy and passion booksellers, educators, librarians and, perhaps most importantly, young readers have in embracing his books.”