Come with me and you’ll be in a world surrounded by a lot of heavy traffic and noise, except we’ve got this cool shell that makes us feel like we’re in a magical bubble. That’s kind of what it feels like at the Hollywood Bowl. Once you’re there, it’s worth it. And November 3 and 4 will be totally worth it.

On those nights, the Warner Brothers movie Willy Wonka & the Chocolate Factory will be recreated, revived, and remixed (like a chocolate river) on stage by an all-star cast. Though they’re calling it “Live-to-Film,” it’s hard to be sure what’s actually happening besides fun. It doesn’t seem to actually be the movie being projected with people singing. Instead, it’s some kind of full-on performance and the promoters call it what it should be: a celebration. It doesn’t matter; they had me at Weird Al. And then I found out that it has visual design by Shag. 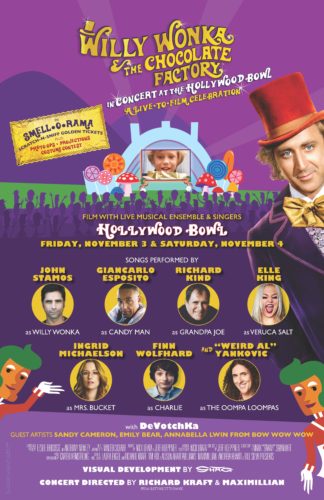 The singing cast includes John Stamos performing “Pure Imagination” as Willy Wonka, Finn Wolfhard (“Stranger Things,” IT) as Charlie, Giancarlo Esposito (“Breaking Bad,” “Once Upon a Time”) singing the role of The Candy Man, and Richard Kind (“Gotham,” Inside Out) as Grandpa Joe, with musicians Elle King (“Ex’s & Oh’s”) singing Veruca Salt’s “I Want It Now,” Ingrid Michaelson as Mrs. Bucket, and “Weird Al” Yankovic as the Oompa Loompas.

The experience will also be presented in SMELL-O-RAMA with guests receiving exclusive Scratch-N-Sniff Golden Tickets and will kick off with a costume contest hosted by original cast member Julie Dawn Cole, who memorably played Veruca Salt.

Doors will open at 6:30PM with costume contest to follow and the concert beginning at 8PM.