When WonderCon put in their schedule that Bryan Singer would speak at a panel for Superman Returns, they also added the promise that he had a special surprise in store. Of course, speculation ran high that Brandon Routh would make his first convention appearance, especially since last year, Christian Bale dropped in at the last minute for Batman Begins. So indeed, after showing a slightly more refined version of the footage he presented at Comic-Con last summer, Singer introduced someone “…who had really worked hard on this film,” Brandon Routh.

It was a shot of adrenaline for the convention. Though Wondercon had been pleasant, it also seemed like many companies had decided to wait until the New York Convention to make any major announcements. 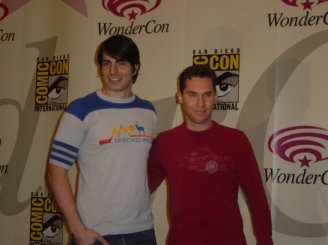 Afterward, Bryan Singer and Brandon Routh sat for a joint press conference. An old hand at this, Singer seemed fairly relaxed. The new Superman, Routh, stammered at times but appeared very thoughtful about his role and the responsibility that comes with it.

Press: Could the two of you talk about your evolution together with the character?

Bryan Singer: My process began with seeing Brandon in an early tape that he had done previously for the role, a screen test actually, and a tape he had done for another role. We had a meeting in a coffee shop where we talked for a couple of hours about the character, about his history.

It was good for me because I get to know the person. When I find the traits in a person, I get to find the character. I cast him, but didn’t share it for several months. Then we started talking about the process.

Brandon Routh: As we talked more, we understood each other more, which is a great thing. We talked a lot, whether it was a sit down for two hours or…and we’d actually talk about scenes. Every couple of days we’d update our background and say “hey.”

We were in Sydney for two months before we started shooting. We would talk about (moments with Clark) and such. What was great is that we were never set in stone. There was always the door open for change. For new creations to happen on the day, when shooting a scene five or six times one way, if it wasn’t working, Bryan would stop and figure out what wasn’t right. And change it so it was.

Bryan Singer: We also had a lot of discussions about the physics of Superman. What is hard for him to lift? What’s effortless? In theory his strength can be infinite, but an actor still has to embody that. Brandon Routh: You don’t want everything you lift to look the same. You have to make sure he has the right posture on take-off, landing and doing turns…

Press: Can you talk about the reshoots? Did you have to do a lot?

Bryan Singer: We did not. We have only one pick-up day in Los Angeles, but that was it. What I did was I switched my schedule. I had shot for 107 days.

Originally I was going to shoot for 128 days, but I was so exhausted and the process was so long that I started to lose my objectivity. So I shortened the schedule and started shooting for the 107 days, then came back to Los Angeles for 3 and a half weeks. Then I went back and finished the schedule in Sydney.

I think there’s one thing I may have to do, as far as pick-ups, but no reshoots. 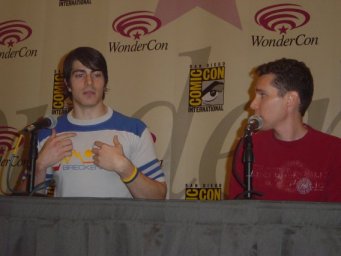 Press: So that was just a misperception?

Bryan Singer: There are a lot of misperceptions. I’ll give you another one, which is that some idiot wrote something that this is 250 million dollars, which is the most absurd thing I’ve ever heard. I’ll tell you exactly what the budget is, 184.5 million dollars, and with effects it may still be a few million over that, which is still a great deal of money, but by no means what that guy wrote.

It was just an irresponsible journalist at a specific trade that I’m trying not to name! I don’t know, maybe he was talking about Australian dollars, or something.

Press: How do you feel about it, Brandon?

Bryan Singer: He’s Superman. He doesn’t have to worry about it.

Press: Brandon, how hard was it to see yourself as an action figure?

Brandon Routh: It was easy. Actually, it wasn’t, now that I think about it, because it was a long process. I did a lot of body molds and body scans. A lot of that information went into making this thing. They came to me with little heads, Mattel heads. I’d have to check out the piece, and say it was a little long, or boxy.

I had to make sure it looked like me. I had approval of certain things. Sometimes they’d get it right and sometimes they’d have to take it back. Dissecting my face…”well, that’s not right,” it was crazy because, am I objective?

Bryan Singer: No, no, it’s really important, for merchandising. You have to make sure things looked right with the suit. It’s your body.

Brandon Routh: Making sure the cape was right, and sometimes the belt would be curved when it was supposed to lie flat…

Press: What was it like as a relative newcomer to work on a big-budget movie with an actor the caliber of Kevin Spacey? 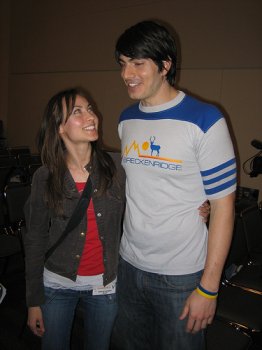 Brandon Routh: Kevin was great. Kevin would say, “you know, sometimes it’s a crazy life that we have that we get to be actors.” He was looking ahead. As soon as he wrapped, we said “congratulations,” and he was out the door. He had to hop on a plane to London to be in a play.

It’s a great thing to deal with working with that caliber of actor on my first film. The whole cast was pretty big.

Press: With this being Wondercon and both Kevin Smith and J. J. Abrams are here, both people who worked on different scripts for the film, have you spoken with them?

Bryan Singer: Kevin I know, but I have not spoken to him since I got here. I don’t know J. J.

Brandon Routh: I just met him today. He says he’s excited to see the film. He was part of the beginning of the process for me, because when I came on it was with his script. The first time I developed Superman for the camera was with that script.

Press: The issue of camp humor has always been a sticking point for comic book movies. Even the original Superman had some sort of campy humor to it with Lex Luthor.

Bryan Singer: There’s a bit of a nod to that. It’s one of the reasons I cast Kevin. Because he has that wonderful ability to bridge the line between whimsical humor and sadism in his performance. And I think with Lex it’s kind of fun to be able to explore both sides.

In terms of films I’ve made, it’s certainly the most humorous. And romantic. So there’s humor, and I hope we’ve held over the best bits from the Richard Donner and Gene Hackman interpretation, but we also have a potentially more sadistic Lex.

Press: Can you talk a bit about what your expectations will be for the film both creatively and commercially?

Bryan Singer: First of all, my goal is to make a good film and try to be open about the process. We have an Internet presence and I think you begin by working with the core audience, the fans, and work your way up from there. Primarily, the goal is just to make a good film. If the film’s good, then the expectations will be met. I’m not trying to compete with anything. It’s why I’m not remaking Superman: The Movie. This is a sequel, if you will.

Press: If you’re not trying to remake the original Superman, what are you trying to communicate emotionally with this film?

Bryan Singer: The time felt right to re-experience this character. It’s time to address and celebrate in some way people’s connection to Superman, and how the character has evolved from 1938 to now. In some way celebrate that. Some of it will look familiar physically and emotionally, and some of it will be new. 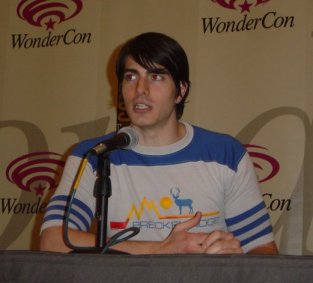 Brandon Routh: There’s a lot of discussion about “is it the right time?” There are many who are huge fans of Christopher’s performance and don’t want anyone else to come in and attempt to recreate that, which is not what were doing.

But with that in mind, I think what’s important for everyone to learn is that there’s always a time for change. Instead of always thinking that things will change for the worse, there are a lot of things that can be changed for the better. Especially with a character like Superman, who brings such joy and inspiration to the world. It’s important to keep that out in the public eye.…

Press: Every film is a collaborative effort. For example, you might be serving the needs of the studios, but at the same time you need to serve the needs and wants of the comic book community. Which ones do you feel is more difficult to deal with?