At WonderCon two weeks ago, DC Comics hosted a really great tribute to Batman’s 75th Anniversary, featuring a panel of creators and celebrities who, of course, adore the Dark Knight. They also debuted this terrific short.

But there’s a dark side to the Dark Knight’s story. In an age when we all seem much more aware of and agitate for creators’ rights, one man’s name still keeps out of the public’s mind: Bill Finger.

By all accounts, even official Batman creator Bob Kane’s, Bill contributed most of the crucial elements that make-up Batman. However, as Troy Benson once explained to me, Bob Kane had a great lawyer and made a sweet deal for himself about the credit.

So this was brought up by an audience member at the panel, and word of it reached Bill Finger’s heirs. This is their description of the events, and their official response:

During a recent WonderCon Anaheim panel for Batman’s 75th anniversary, an audience member asked panelists for opinions about the fact that writer Bill Finger does not get a creator credit alongside Bob Kane, who is credited as the legendary character’s sole creator even though Finger came up with defining qualities for this character before Kane ever signed his first contract to produce the Dark Knight’s adventures. 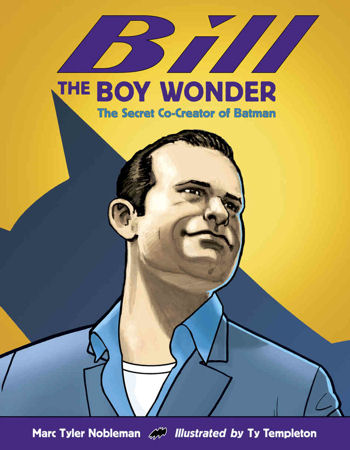 Finger wrote the first Batman story, his tragic origin, and hundreds upon hundreds of comic book stories for more than a quarter of a century. He named both Bruce Wayne and Gotham City, he created Commissioner Gordon, he developed many other supporting characters, he created or co-created one fantastic villain after another, and yet he died broke and relatively unknown more than 40 years ago.

After a moment of silence following the audience member’s question, panelist Brian Buccellato joked, “Crickets.” The panel’s moderator, DC Comics’ Larry Ganem, then said, “We cherish what Bill Finger did and his contribution to creating Batman, and we’re all good with Finger and his family.”

The aforementioned Finger family, which consists only of Bill Finger’s granddaughter and her son, later learned about this exchange and did not agree with Mr. Ganem’s “all good” assessment.

ATHENA FINGER RESPONDS: “75 years of Batman! No one could have predicted the longevity and the continued relevance of this comic book hero that has become a cultural icon when my grandfather, Bill Finger, collaborated with Bob Kane back in 1939. My grandfather has never been properly credited as the co-creator of Batman although was an open secret in the comic book industry and is widely known now. It is now my time to come out of the shadows and speak up and end 75 years of exploitation of my grandfather, whose biggest flaw was his inability to defend his extraordinary talent. Due to what I feel is continued mistreatment of a true artist, I am currently exploring our rights and considering how best to establish the recognition that my grandfather deserves.”

In his autobiography, Bob Kane acknowledged, “Now that my long-time friend and collaborator is gone, I must admit that Bill never received the fame and recognition he deserved. He was an unsung hero.” Regarding the issue of giving Finger official credit, Kane specifically said, “I often tell my wife, if I could go back fifteen years, before he died, I’d like to say, ‘I’ll put your name on it now. You deserve it.’”

This fall, the Warner Bros. television series GOTHAM will feature many Bill Finger creations, including the city itself. Will the series that carries the name he gave to Batman’s city credit him in any way?

DC has settled with the heirs of Siegel and Shuster, so that every Superman appearance says “published by special arrangement with…” Could that credit be added to to Batman? And should it? (Yes.)

The treatment of Bill Finger was pretty bad, to the point that the Eisner Awards also annually give out a special award named after him, to honor those creators whose contributions to our popular culture may have gone unrecognized or largely unsung.

For more information, the Finger heirs included these links: