“There’s a lot of hesitation in Hollywood to do a female-driven Western.” But Legion M Head of Content and COO Terri Lubaroff also knows the timing is right for such a project, and only going to get better. So when she found the Slamdance award-winning screenplay for Girl with No Name, she knew it was something Legion M, the fan-owned studio, had to develop.

At WonderCon 2019, Lubaroff took some time away from the Legion M booth to talk about this passion project. “We thought, how can we build an audience for this amazing project? The script is brilliant, but without already doing a movie? …we all said a comic book is the way to go.”

“We’re doing a 40 page large format one-shot comic book,” Lubaroff said. “It’s a self-contained story in the universe of Girl with No Name. It’s a jumping off point for where the movie will go. It’s an all female artist team [including acclaimed comic artists Tula Lotay (cover/promotional art), Dani Strips (line art/character design), Gloria Caeli (colorist), and Annie Parkhouse(letterer)] on the comic book side and on the movie side – the director, the producer, the lead actor – all female.”

To catch you up to speed, here’s Legion M’s synopsis for Girl with No Name:

On the way to a new life on the frontier, a five-year-old GIRL’s parents are murdered by highwaymen. Orphaned, The Girl is taken in by her mysterious UNCLE, an ex-Confederate turned bounty hunter—not a man who ever wanted to raise a child. But The Girl demands he take her in because she knows that he is the man who will make her parents’ killers pay. And they will pay in blood. Every day, The Girl pushes her Uncle to go after the people who killed “ma and pa.” At the age of ten, her Uncle finally teaches her to shoot. Like him, The Girl is a natural sharpshooter…a crack shot. She has more natural talent with a gun than anyone he has ever seen. It scares the Uncle to think what could become of her if she joined the “killin’ trade.” As she grows the bond between them grows, and he begins to see her as his own daughter. But just when The Uncle is about to hang up his gun for good, a band of outlaws murders him and burns their ranch, leaving the Girl – now 18 – for dead in their burning house. But the Girl survives the fire and now, orphaned once again, has only one drive – vengeance. With no one willing to go after the outlaws, The Girl grabs her gun – taking justice into her own hands.

As Lubaroff enthused, “It’s a compelling story about a bad-ass girl in the Old West.” 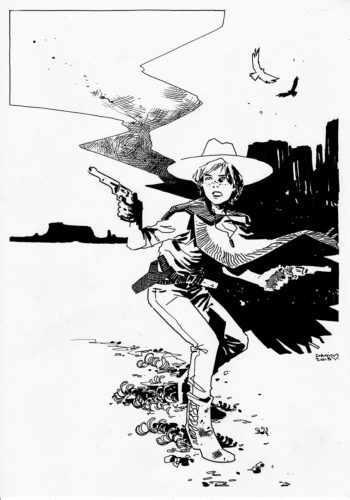 For Legion M, it’s also a shift in the way they shepherd projects to the big screen. Previous films have been independents that they helped in production, like Colossal, Mandy, Bad Samaritan, and the upcoming Jay and Silent Bob Reboot. But this is their first publication effort, though Lubaroff got her start in comics working for the sadly gone Meltdown Comics in Hollywood.

“I hope this is the first of many,” she continued. “We had no idea how this was going to be received. Crowd-funding is our sweet spot, we decided to do pre-sales on Kickstarter. We launched the campaign about two and a half weeks ago. Our goal was $6,000, which we thought a pretty good goal for a brand-new comic book. So far we’ve sold almost $80,000 worth of comic books, which is incredible. (As of this writing, it’s up to almost $99,000) To me it proves there’s an audience for this type of material. I’d like to do many more.”

Though comics seem like they’ve never been hotter, individual books do have a hard time getting noticed in the crowd. And not just the crowd of a convention floor. Lubaroff acknowledges this, and admits that’s why Legion M took the Kickstarter route.

“Kickstarter is one of the main ways that independent comics are getting published these days. To me that really says that there’s a way to get direct to the consumer, which is sad for the mom and pop comic book stores like Meltdown, which I loved so much but unfortunately couldn’t survive in this environment. I think Kickstarter is one of the ways that comic book artists and creators will be able to get their books out. 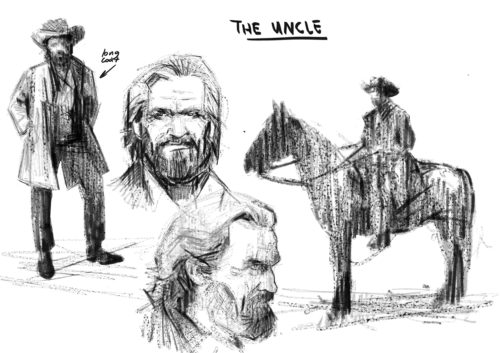 In stores, you have to order it so far ahead of time, you have to guess what the market is going to respond to. It’s a difficult thing to predict, if people are going to latch onto an independent comic book. But if you have an audience built in through Kickstarter, it’s much easier.”

If Girl with No Name seems like something you’d like, there’s still time to buy it through Kickstarter. The campaign ends at midnight on Thursday, April 18. 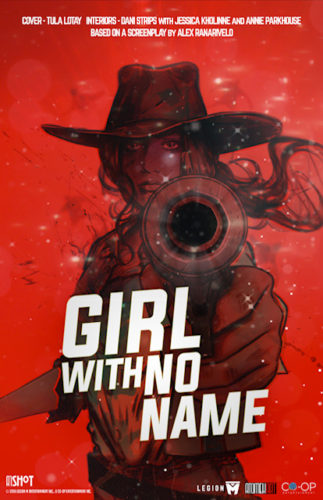