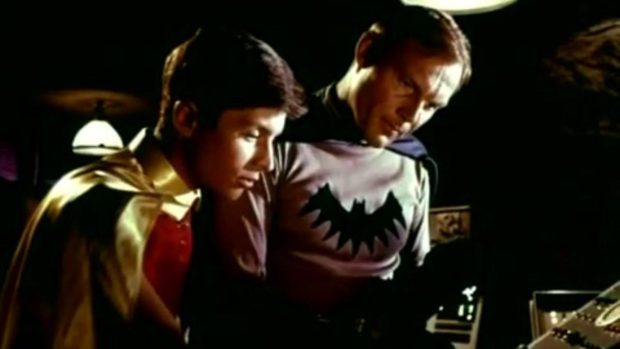 Yes, Adam West was more than Batman. But there’s also no doubt he was Batman. Take a look here at the final screen test with West and Burt Ward (still billed as Burton Gervis), and compare it to the test with Lyle Waggoner and Peter Deyell doing the exact same scene.

West really had this down from the beginning; he’s got the cadence and the reassuring tone. I don’t want to sell Ward short here, either — he’s the teen Boy Wonder that Dick Grayson would become in the comics, instead of the boy that most of the comics had up to that point in 1966. Waggoner has his swagger, and almost an announcer’s voice — a tone that would work well in his role as Steve Trevor on Wonder Woman almost a decade later, but just wouldn’t have made Batman ’66 work.

There’s also one other key difference here — whether it’s in the script or not, I don’t know. But West says one line that Waggoner doesn’t, and for me, that one line sells it. See if you agree.