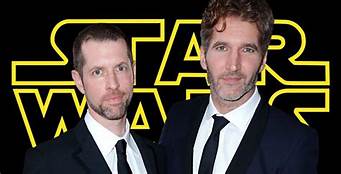 Disney CEO Bob Iger confirmed that Game of Thrones show runners David Benioff and D.B. Weiss’s Star Wars trilogy will indeed lead the next wave of Star Wars films. (We’d called it last week.) Previously LucasFilm confirmed work not only on this trilogy, but with The Last Jedi  director Rian Johnson developing another.

While some sections of fandom is happy that it isn’t Johnson’s trilogy hitting theaters first, Benioff and Weiss are currently facing backlash for their treatment of the final season of Game of Thrones. Iger, speaking at the Moffet Nathanson Media & Communications summit, briefly acknowledged the controversy.

“We did a deal with David Benioff and D.B Weiss, who are famous for Game of Thrones, and the next movie that we release will be theirs, and we’re not saying anything more about that.”

The HBO fantasy juggernaut currently in its final season and is pulling in massive ratings that will likely not be seen again with traditional broadcasts. HBO says that the final season has averaged 43 million viewers per episode, which factors into account DVR and HBOGO. Four of the five highest viewed episodes come from this final season. Despite the divisive final season to some viewers, with criticisms heavily thrown at the show runners for rushing to close off the story at the cost of character development and believable pacing, when the pair were hired it was a no-brainer and lauded by many as a step in the right direction for the beloved franchise. The hiring was particularly strong with those who found dissatisfaction from The Last Jedi, coincidentally directed by Johnson.

While Benioff and Weiss will oversee the trilogy, it is highly unlikely that they will be the directors on any of the films. Despite David Benioff having some episodes of Thrones on his filmography, the writing/producing pair (who have also written the screenplays for X-Men Origins: Wolverine and Troy) will be only a part of the creative force behind the project. Indeed some of the major criticism between The Force Awakens and The Last Jedi was the difference in story and direction, which was highlighted by two different directors without one guiding vision.

Iger also revealed that in addition to The Mandalorian  and The Untitled Cassian Andor series it is looking like Disney+ will be the home of a third live action Star Wars show :

“In the interim, we are producing two live-action Star Wars series for Disney+. One of them is called The Mandalorian, which is being supervised by Jon Favreau, and the other one is a bit of a prequel to Rogue One. My guess is there will probably be one more, at least one more, live-action series that we produce for Disney+, meaning a Star Wars series, before we release the next film.”