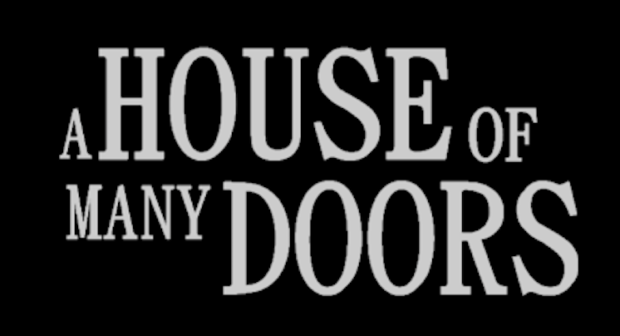 A House of Many Doors is an odd title for an odd game. An odd experience, more accurately.

See, whereas many titles would have you traversing a barren planet trying to figure out what is going on, House finds you traversing a cavernous structure with a semi-alien landscape in a hulking Kinetopede. A kinetopede, yes. A humongous, rickety, smoking, lumbering, decapedal, coal-powered land train that everybody in the narrative treats as totally normal and appropriate, is your means of conveyance, life support, defense, and romance. That nobody bats an eye at your chosen means of locomotion, or that the captain of said monstrosity is a nominally reformed criminal in a tank top, sets the stage where all disbelief must be suspended. 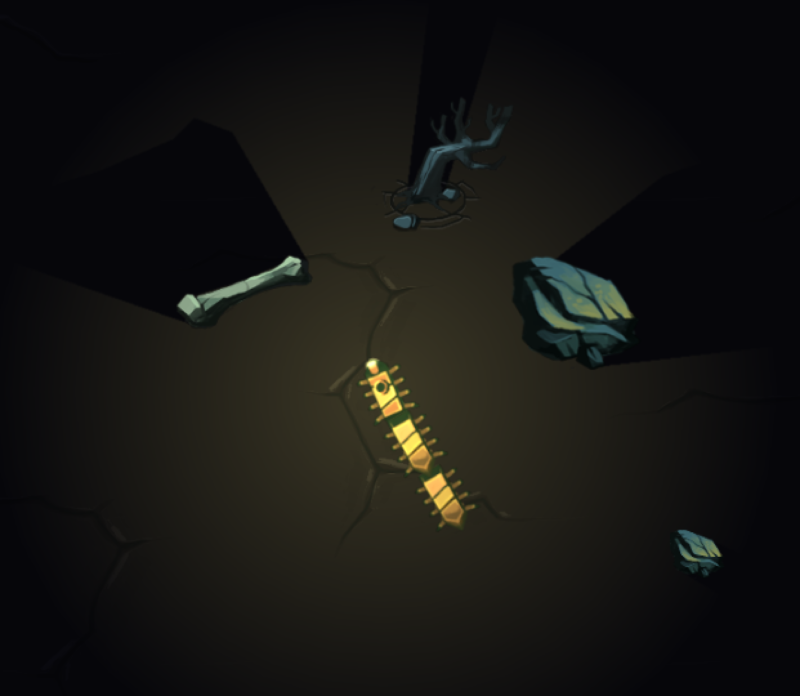 At the outset, you have precious little to go on. Your crew is terribly frightened, your heartlight has gone out (hint: its mostly just a lantern made out of the excised heart of some poor sap…see: suspension of disbelief), and you must find your way to get it repaired.

Right off the bat, the game is utterly confounding. What pro tips they provide are generally Spartan, leaving the player, who finds himself just as paranoid as the crew of this forlorn vessel, to his own devices as far as gameplay mechanics go. For instance, upon starting the game, you must choose your background and a series of traits. Of course, there is no explanation of what each of these traits means. So I chose the traits of Grit and Guts, because I’m a man’s man, and God chocked me full (to the BRIM) of both of those attributes. After about thirty minutes of play, I realized that I couldn’t talk my way out of a paper bag, but apparently I would have no trouble from a handful of TSA guards trying to pry me from my seat.

The game does not offer so many nebulous choices as a lot of games these days portend, but more like the sort of situations that would seem perfectly normal if you had fallen asleep at the Circus Circus on Saturday night and woke up in a Ralph Steadman painting. Like here, where I needed some gas money, so I had a memory surgically removed from my head and put into a box to make a quick couple hundred Guineas.

So then, what do you do when you are set upon by rocket ship-bound rogues who try to shake you down for a wheelbarrow of coal?

That’s right, you kill them all. Of course you do! 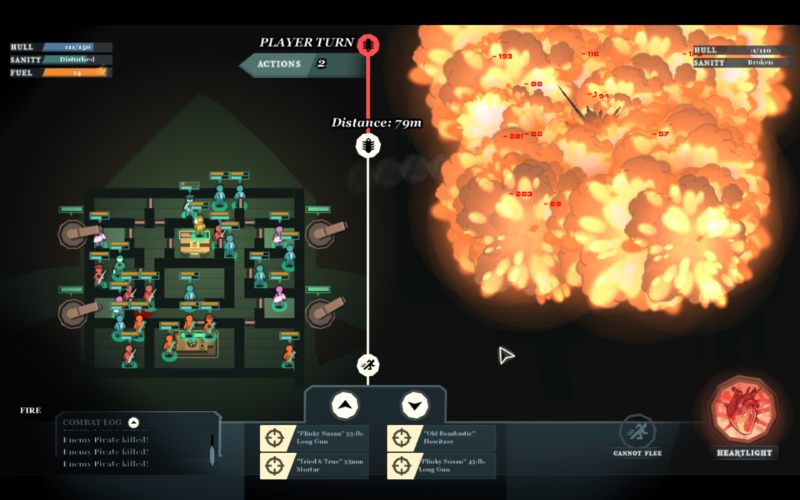 Fights do not always end well (most don’t, whether in House or in meat space). Your crew is assembled of a decidedly ramshackle, hardscrabble bunch that is constantly getting injured, maimed, or traded to pirates to get out of trouble. Which is fine, mostly, because at each city you visit, you are just a pamphlet away from hiring new crew who may or may not be better qualified for the position. Which is to say, don’t get too attached to any one of them, unless they offer you a particularly tasty series of missions.

How could I sum up a game like A House of Many Doors?

So many of the games I choose to review are strange, and this is no different in that regard. However, what most of these cheap games lack is depth. Depth of story, depth of options, depth of character. No, my friends. These areas are where House shines.

House is indeed a house of many doors. While the story may be occasionally beguiling, it is consistently fascinating, moody, atmospheric, and charming. That’s right. Charming. The same desperate charm that has masochists like yours truly flocking to the seemingly endless stream of Arkham Horror board games. Except in this one, you travel the landscape building a vast inventory of observations and memories, selling them (either written, oral, or in boxed form) or writing poetry. Yes, poetry. 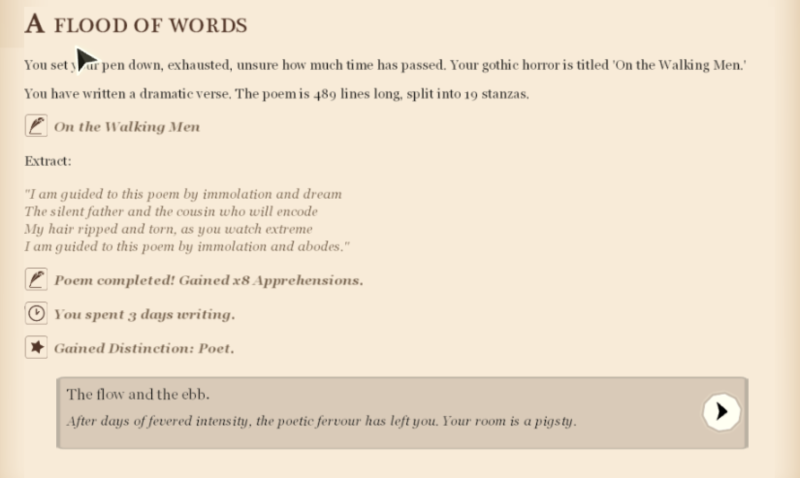 Like Arkham Horror (and most Lovecraftian offerings), the general mood that permeates House is typically dire. Maybe not everybody will be so enamored by a game that convinces you that, at every key press, that you are about to lose, but such experiences make even the smallest victory decidedly life-affirming.

Combat is one of the events that perpetuates the sort of horrendous straits in which you may find yourself. You have few options, really. Advance or retreat your kinetopede, fire your guns, move crew around the hull, or even send your guards to the other land ship via the board option (handy for attacking the other crew, obviously). At any given time, it is a somewhat delicate balance between aggressiveness, cunning, and sometimes simple brute force and determination. The relative simplicity of the combat system belies the potential strategy involved, despite the apparent lack of variety. After limping away from a few scraps, the combat mechanics started to make real sense, even if I had to replace a few of my maimed, disfigured, or stone dead crew. 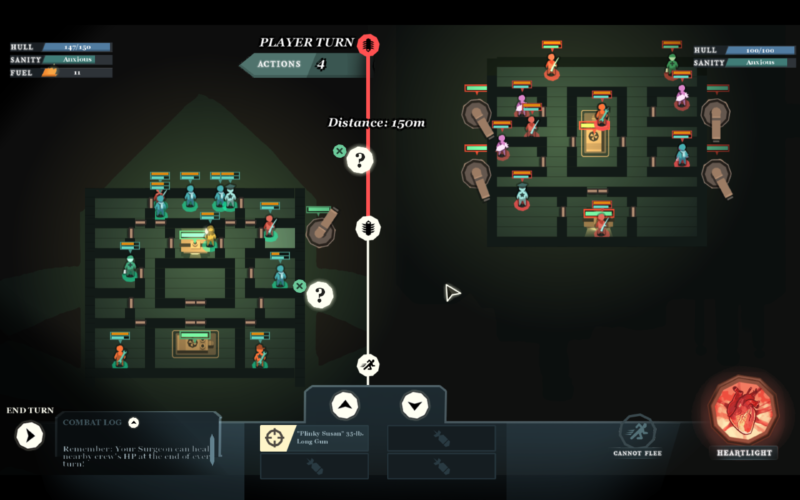 As you make your way through House, you find yourself commiserating with wild and varied races, including all manner of human refuse, cat people, and impossible anthropomorphized sharks. All of these types are available to serve in your crew, if you find them in the right place at the right time. They bring with them boosts to your attributes, so you may spend good money putting up posters looking for a particular individual to improve a lacking skillset to fill a vacant crew position. Of course, a Lookout with high Vigilance has been helpful in scavenging artifacts for the Budiak Museum of Unnatural Curiosity. Yes. That’s a thing now. Pay at the entrance. Exit through the gift shop.

My main bone of contention with House is that it is…its…it’s a bit read-y. As in, it is sort of the TL:DR version of every adventure game you’ve ever played (to include Realms of Despair, Castle Wolfenstein, and the original Oregon Trail). Despite the wit and mummified (that’s how dry it is…get it?) gallows humor of the script, I found myself routinely clicking a series of responses without reading the prompt. Pro tip: it’s a very dangerous habit. This habit established itself almost immediately, as when I was putting together this very article, it appears that I forewent the tutorial willingly, as the option was mentioned in the subscript of a “yes” button very early into the game. I’m humble enough to mention it, but not enough to go back and remove my earlier comments. 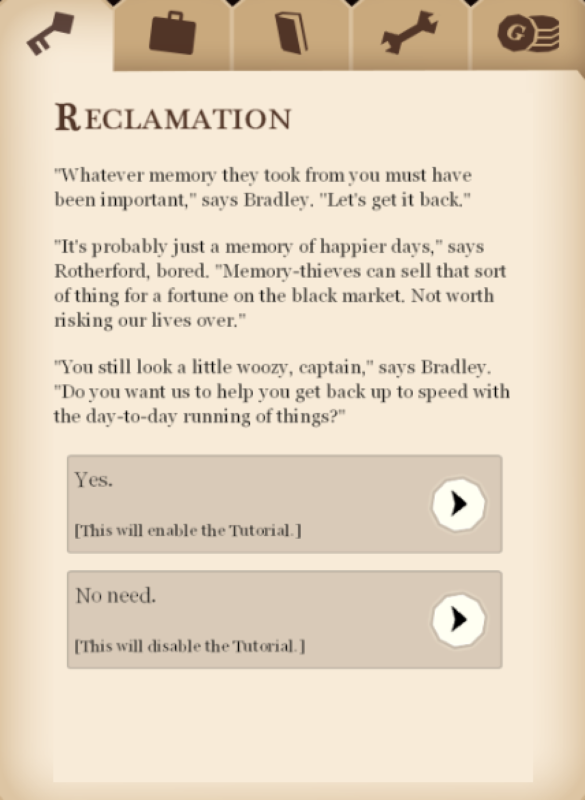 That bone is hardly enough to make the experience negative, despite the fact that nearly everything that occurs in this game is almost overtly negative. Crew members going insane, constantly being broke, being totally in the dark about which way to go, and even  the consistent cold shoulder I receive at my apparently unwanted advances at my female crew, all seem perfectly germane in this world. Of course, if you don’t get it on the Kinetopede, there’s nothing stopping you from seeking out memories of “romantic encounters” with the undead at the nearest port-of-call because, hey, everybody needs some love. And a juicy memory to sell to the highest bidder.

See, one of my rules for cheap games is that I have to play two hours to write a review. Most games I start writing after about 15 minutes. Not House. I’ve played over seven hours of this one and I find myself wanting to play more and more, just so I can tell you fine people more about it. It is a rich and dreary landscape to be discovered and deciphered. Unlike most cheap games that seem to hide details because the creators have a healthy distrust of spellcheck and choose, instead, not to write at all, House obscures details because the game employs perhaps the most appropriately scaled learning curve I’ve experienced to date. Information is meted out as necessary and game mechanics- some of which I still don’t understand- will not sully your journey. Not in the least, so long as you fully grasp the ultra-meta paradigm of a nearly documentation-free game where the primary commodity is memories, and your main task is to venture out and gather experiences to sell.

Right. A game that rhymes things with orange, so to speak.

The situations where commodified thought and real experience meet abound in this game. Take, for example, a recent encounter I had with some bandits in a fast-moving airship. They caught up to me and demanded a memory. Yes, they wanted to drill into my head and steal memories. Well, because I need those hideous recollections for my poetry, I was loathe to let them do any diddling. So I fought them for it. They fired an odd blue bolt out of one of their cannons, the likes of which I’d never seen. It landed squarely in one of my gun rooms and sent some of my crew into complete madness. Oh, okay.

So after I blew them to smithereens with a new mortar I purchased by writing freelance articles for a newspaper in the City of Keys, I realized that they had employed one of the many armament options I’d seen, balked at because I didn’t know what it was, and moved on. However, if they had been more accurate with the, oh, six other shells they’d fired, I would have been in a real pickle. I also realize that such ordnance may be highly useful in the future, so I must visit strange far-off cities, wandering the streets and gathering tales to write about in some local newspapers so I can turn my freshly spun yarns into cold, hard cash to use to buy brain-scrambling weaponry. I ALSO realized that the Warding Armor I purchased by mistake some time back had actually deflected most of their volleys. After the battle, I gather a “thrilling war story” that I then sell to some ghouls at a nearby city for 80 Guineas, and use the dough to repair the hull of my beloved death trap.

So, sitting here attempting to mull the emotional juxtaposition of the fact that four of my crew turned violently insane in the heat of battle, abandoning battle stations (silencing one of my guns and making one of my guards attack the surgeon) while ultimately being saved merely by coincidence that I had purchased the appropriate armor by mistake, and the fact that I paid for three hull-shredding cannons by selling memories, ransoming a prisoner, and writing poetry, I can only tell you this: you be the judge. You don’t live that sort of life by pursuing a career in plastics.

Are we the sum of our experience? Is a memory worth a buck? A thousand? Will you ever finish your opus? You be the judge. Please.

A House of Many Doors is engaging, chocked full of delicious character, lore, and a unique inquisitive philosophy. It has something to offer everyone…so long as everyone doesn’t get emotionally attached to his friends too easily.