This weekend at Baycon in San Mateo, Ric Bretschneider and I will be on a panel about other cinematic universes from comics, and here’s Exhibit A, conveniently dropping a new trailer. Opening July 21st, Valerian looks eye-popping, and as I’ve noted before, its source French graphic albums from the 1960s went a long way toward influencing George Lucas on a little thing called Star Wars and director Luc Besson’s own The Fifth Element.

The trailer is now calling it Luc Besson’s Valerian, which I get, but I think is a little unfair. Maybe it flows a little better and has higher name recognition than Pierre Christin and Jean-Claude Mezieres. I also wouldn’t be surprised if by about July 1, all marketing just calls it Valerian, instead of its full title, Valerian and the City of a Thousand Planets. Because we’re only going to remember the word Valerian. 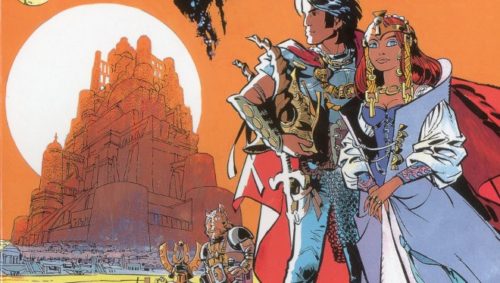 There’s a lot of backstory to Valerian and Laureline, the two lead characters. In the graphic albums, they’re time travelers, and Laureline herself is an 11th Century peasant girl. Is there time for that much exposition when you have a city of a thousand planets to explore? We’ll see.