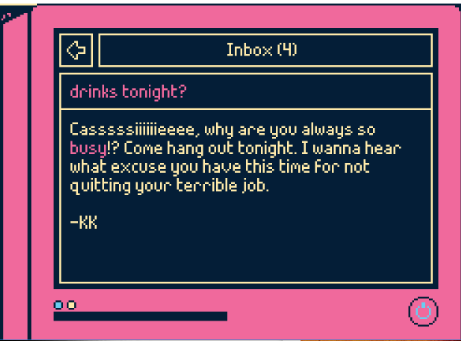 This is an odd one.

SPOILER ALERT: I recommend this game.

See, you thought you would be able to predict the outcome of this review by reading. I sensed that. A turn of a friendly card (Credit: Alan Parsons Project) and I already knew what was happening. At least, I mostly did. I’m not totally psychic; you see, I sense thought trends.

Now you know how to play Fortune-499, or what it may be appropriately called, “Rock-Paper-Scissors: The Game.” And that’s not a dig. The game openly flaunts its reliance on America’s favorite method of who gets to sit in the front seat on the ride home.

You play a psychic…no…a mystic…

No…what are they called?

A witch? Your character never really cops to being anything in particular, though she does portend to be quite good at it, despite her need for improvement.

You work in a typical office building filled with regular boring people, wizards, copy machines, witches, paper shredders, monsters, filing cabinets, and warlocks. You know, a typical office with the expected cast of characters. Not only that, but when you check your email you are bombarded by emails from obnoxious cluster mates who constantly pry into your personal business.

Like happens all too often, your qualities are overlooked and you are put on the chopping block when you are set upon by horrible monsters! You do what any loyal employee does…you grab your deck of tarot cards and challenge the hideous beasts and bang out a game of rochambeau like your job depends on it.

Now, that all sounds a bit silly, doesn’t it?

Now, it isn’t just rock, paper, scissors. Fortune-499 introduces a peculiar method of doling out your hands, which takes the form of deck building. When you agree to battle, you shed your rocks, papers, and scissors that vary in strength and appear in order depending on whether or not you have availed yourself of the appropriate office machines that allow you to rearrange your deck, stack it, and improve your stats. 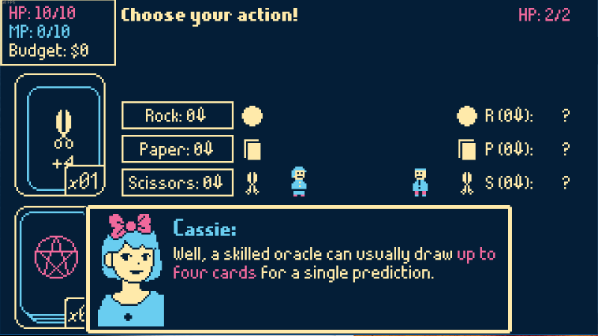 Of course, the use of those machines costs money…I mean, we are talking about an office building here. Those unlabeled bottles of brown liquor gradually dwindling into the dregs as suited men conjure brilliant advertising campaigns out of the ethers don’t buy themselves. How do you earn that money?

By fighting, of course! 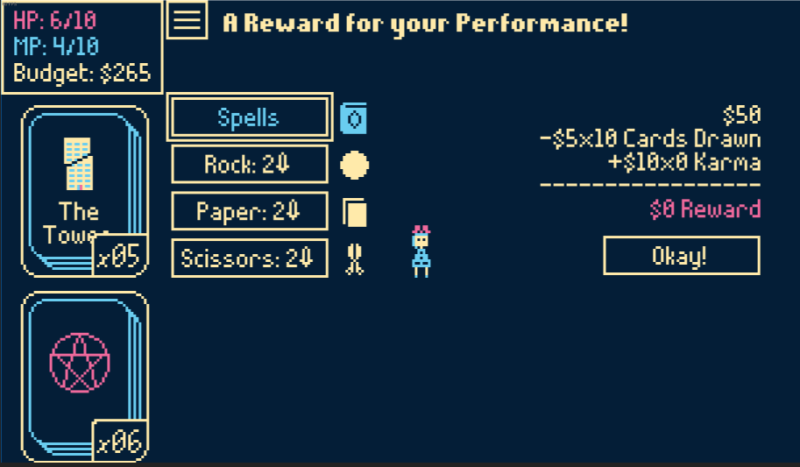 See, the fewer cards you deal in order to win, the more money you make, which allows you to purchase more time at the paper cutter…and by the above image, I’m clearly not that good at it.

Look at it this way…beneath the silky veneer of all games there are the mechanics, the sausage-making implements that are never meant to be seen. Sure, you can click your mouse and send some lead across the map in a first person shooter…but you don’t think those are bullets you are shooting in cyberspace, do you? Do you think that’s air you’re breathing? Hm. Of course not. It’s all wizardry. The calculations are hidden, shined up, and presented to you as something else.

Just like how those guys yelling play-by-play during your football game aren’t really describing a football game. Or how you are not really denying entry to the huddled masses by refusing to stamp a passport in Papers, Please. They’re all vehicles for mechanics.

For such an odd little dalliance such as Fortune-499, we have stumbled onto something unique and, if I dare say it, visionary; a game that takes its main combat mechanic and throws it at you, at once self-parodying and shamelessly hip.

Sure, it isn’t a glamorous to lay all your cards on the table like this. In most games it would be a drab affair. Pages of calculations and code and nonsensical math. Who needs that? Not Budiak. He doesn’t math.

You want the front seat? You had better own the car, my friend, because a challenge is coming your way. Rock? Nothing beats rock…or said so many of my friends who had to cram their once delightful long legs into the back seat of a Carolina Green VW Scirocco.

Who gets the tip? Budiak’s sawbuck stays in the wallet today, my friends. The waitress at Mel’s will never know.

Autobiographical details aside, Fortune 499 is an amusing, if sometimes repetitive game. Battles take a few different tacks, but they always boil down to rock, paper, scissors.  Some enemies, especially bosses, offer special difficulties or force cards upon you that require burning your deck or throwing a bad hand on purpose. The sounds are nothing special, but do not detract from the action in any way. The graphics are homey and act as an non-abrasive complement to the stripped-down combat mechanics.

To be honest, I didn’t even have to play this for two hours to give a recommendation.

Despite the amount of time you spend forced to talk to people in an elevator. 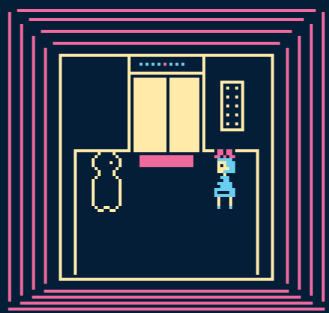 Fortune 499 is a delightful throwback to adventure games circa 1994. While its combat system is threadbare by design, it has enough complexity to keep you interested.