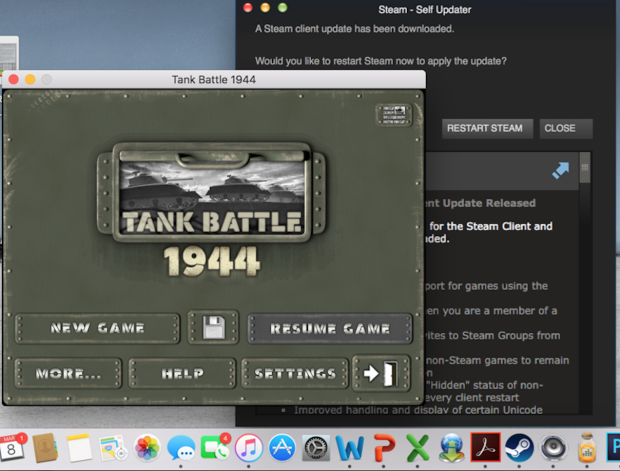 A word of warning…this review is boring. It’s sort of like Tank Battle 1944, actually. See, this game starts out promising, and then the shtick wears off very quickly. Just like this review’s shtick has already worn off of before the end of the first paragraph.

First things first, this game insults you from click one. Open it up and you are greeted to the absolute smallest game window in the Steam store. I actually think that having a game open in this size is illegal in most European countries. 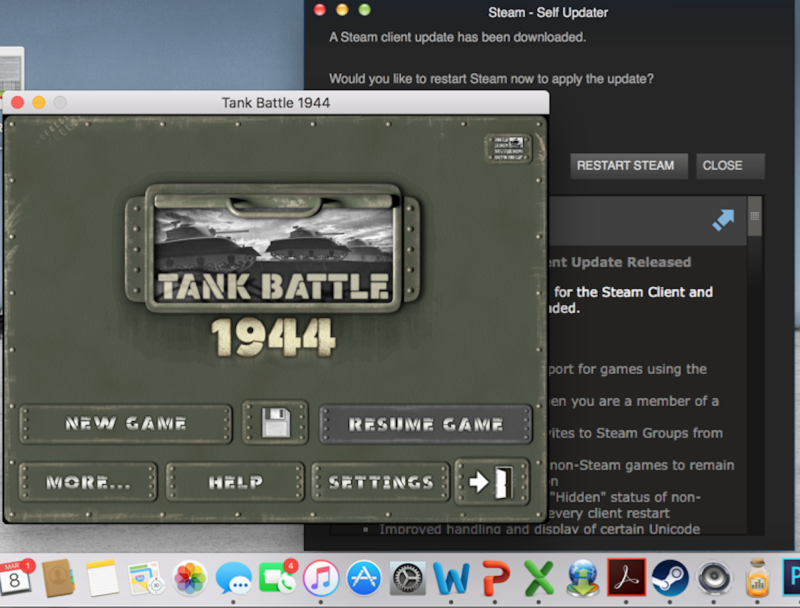 What the hell is that? That window is smaller than my seemingly obligatory Steam update window.

No, most games do not open in a tiny window. Like, so tiny that you can’t read the text. No, I am not a giant, using a comically small monitor. No, I’m a regular man. A regular sized man. Shorter than average, yes, but otherwise physically quite average. No, scratch that, I’m physically quite above average. Just smaller than most. Shorter. Shorter than most. In height. Shorter height-wise than most. But probably closer to the worldwide average. So shorter, domestically, height-wise, but mostly normal depending on who you talk to in China.

From the get go, Tank Battle 1944 is promising, if for no reason other than it uses the term “recce” to mean reconnaissance. For those who don’t wear non-novelty dog tags, the term reconnaissance itself is somewhat exotic. I digress.

After that, it goes downhill a bit. But not super downhill, because a real downhill run would be at least a little exciting. No, not this one. You will see this situation repeatedly: 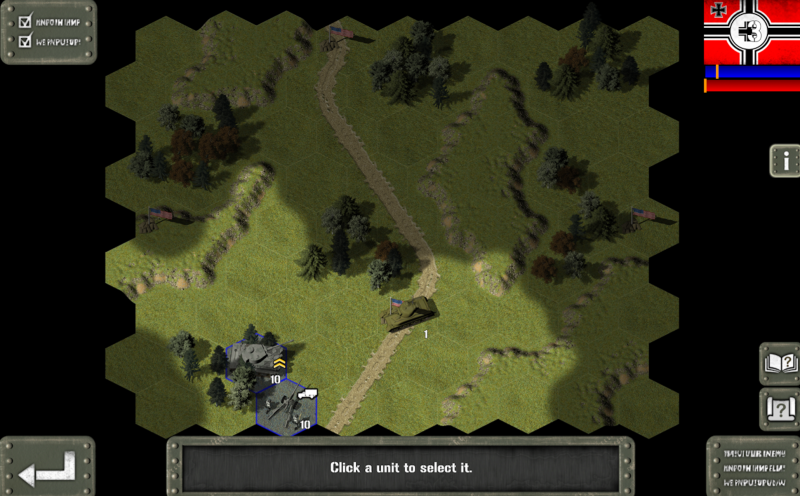 That’s me, as a single German Tiger about to be overwhelmed by a section of American Shermans. No big deal.

See, Tank Battle 1944 is a casual game. An extremely casual game. On its face, it appears to be a complicated mini-sized Memoir ’44, but it is much more like a simplified Command and Conquer.

Sharing several elements of tactical hex games and some of your more basic RTS types, Tank Battle 1944 really comes into its own when you realize that, when all things are equal, it is tactics that will win the day.

Ah, yes, all of the classic tactical tropes are here: cover, high ground, hiding in the trees like a gang of filthy revolutionaries. Duck, dive, and dodge.

Of course, that is not the best thing about this game. The best thing about this game is that it is quite possibly the most casual tank-warfare game of all time. My first hint was that there is a difficulty setting called CASUAL. I don’t know if I’ve ever seen that before. Most games just call that “easy.” Some games even go so far as to mock you right up front for choosing the easiest setting, like our man BJ:

I digress. How casual…ok…that’s a tough one. It’s so casual that I actually fell asleep while playing it last night. Not because I was up so late, but because we are talking about the ground combat equivalent of Thanksgiving dinner.

Yes, you can load up your M5 tanks and your half-tracks and Army guns and go outflank and out-move a column of panzers all you want, and each shot is like another big juicy slice of white meat, dripping with gravy and tryptophan. And much like Thanksgiving dinner, it overstays its welcome and starts to drag right when you think it should be getting good. Chances are you have already gorged yourself before dinner actually starts. My mom always says that dinner will start at 1pm, but it usually starts at something like 5. So if you show up hungry to my house on Thanksgiving day, you’re doing it wrong, because you’ll have to eat a meal and then wait for the main event. And when the hell did she stop making yams and start making sweet potatoes? I mean, the two really aren’t the same. I mean, they are kinda the same, but one is white and one is dark orange. Is the word “yam” repellent for some reason? It’s a normal word. It’s been around for a while. Like the only time that it is okay to use the word “yam” is when it is preceded by “candied”. And please tell me what you would do if you put yams in a sweet potato pie. So why is it interchangeable everywhere else?

Sorry, I digress once more. There seems to be a pattern. I wonder why my mind keeps wandering like this.

Where the game really falls short is its difficulty. Tank Battle 1944’s difficulty settings are dreadfully unbalanced. If the casual setting is too easy for you, kicking the difficulty up by one notch will leave you quickly swarmed and overcome by what was once a pitifully inferior force, and you will be sitting on your couch alone, wondering what the hell happened, and somehow you will feel extremely embarrassed even though there isn’t anybody around. I get like that sometimes when I do stupid stuff, like when I take a whole long belt of scotch right into my left lung and hack it up like a 90 year old emphysema patient. Or like when I step on a Lego in the middle of the night. I’m embarrassed by that because I don’t have any kids.

My goodness, I keep going on these tangents. It’s…it’s almost as if I forget about this game the instant I stop playing it. In fact, this game is actually in my dock right now, open, in the middle of a battle. It’s been open for hours now. Look. 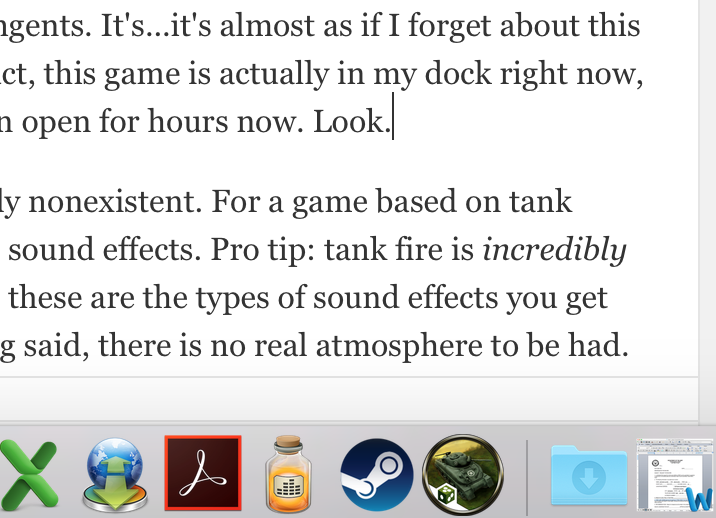 Oh crap, that’s the problem. This game has no character. That’s it. Yeah, that’s the issue. It has no character. Nothing to make it stand out, for better or worse. Even the bad games I review have something I can sink my teeth into; some specific defining experience, like unique artwork, music, game mode, speed, slowness, anything. Any of those things that really make you remember a game. Like Albert and Otto‘s art, or The Rivers of Alice‘s really super awesome art (my art, not the in game art- the actual game is more memorable for its music).

No pop. No zing. Nothing to make you really remember the experience. Tank Battle 1944 is utterly forgettable, which is a conclusion I did not seek. Even worse, it is such a drab experience that I found it difficult just to write this review.