“It reminds me of Captain Marvel,” laughed Nicolas Cage as he set the lightning bolt shaped trophy down.

I can’t be sure, but that may be the first time a Cinequest Maverick Spirit Award winner has made that connection. And the award once went to an actual comic book writer. Though yes, Nicolas Cage once created a comic, too — Voodoo Child from the late Virgin Comics.

The hardest working actor in show business wasn’t there to talk comics at the California Theater Wednesday night, though interviewer Sal Pizarro managed to lead him there a couple of times. Cage was there to talk about his career, and in a fascinating second conversation with his brother Chris Coppola, the future of entertainment in Virtual Reality. 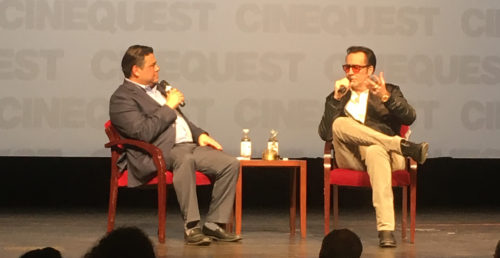 After recapping how he had gotten started in the movie business, Cage admitted that at least one story about his early days was really his attempt at building a mythos. He saw himself in competition with actors like Robert DeNiro, who had famously gained and lost weight for Raging Bull. So Cage claimed he’d had two teeth removed for his character of Al in Birdy; really, they were baby teeth that had never fallen out and needed to be extracted. However, he did confirm that he ate a bug for Vampire’s Kiss — twice. The second time was for an unused take that he’s convinced was the director punishing him. 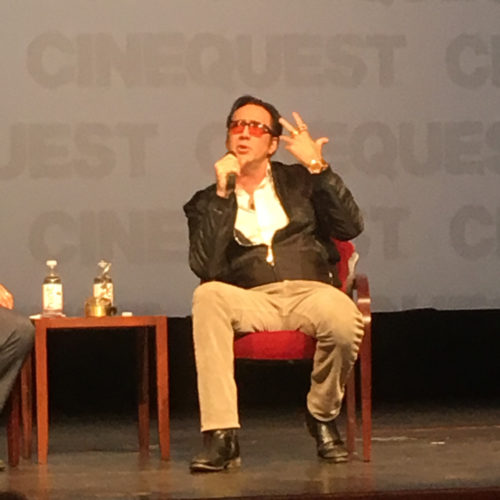 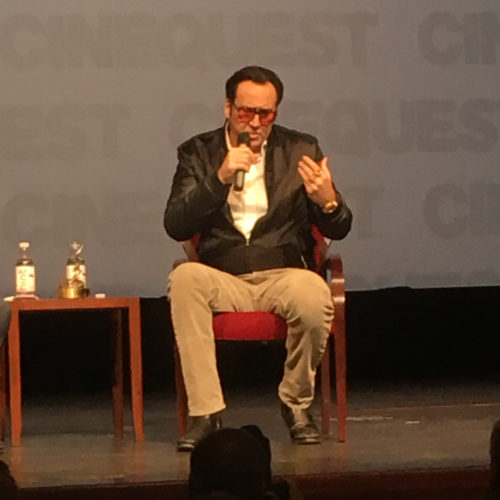 Pizarro got the affable Cage to open up about his process. The actor recalled that for his recent turn in Mom and Dad, he had channeled anger from a moment in kindergarten — a deep-rooted sense of unfairness that the Hokey Pokey was designed to separate the coordinated children from the uncoordinated children. Though for Leaving Las Vegas he did not become an alcoholic — “drinking gets in the way of hearing the music of the dialogue” — Cage did hire a drinking coach to set him up for each scene.

The conversation did turn back to comics when Pizarro asked the actor about his name. Still legally a Coppola, the actor took his surname from Marvel Comics’ Luke Cage and composer John Cage. Pizarro and Cage mused over what a good show Luke Cage is, and how Cage had known as a kid that once special effects got to the point that studios could believably bring superheroes to the screen, they would dominate pop culture. Though he did not specify which issue of The Incredible Hulk it was, the actor claimed his brother could vouch that he would spend hours just staring at one cover. 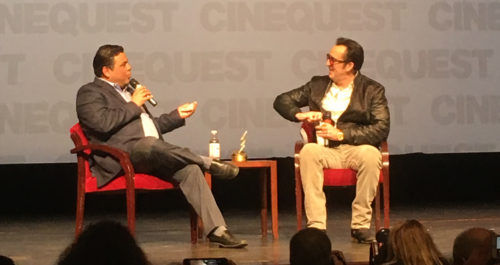 But his real influences were the movies, in particular Citizen Kane. He mentioned that he had even recently watched it one night and then had to watch it again the next morning. But it was James Dean in East of Eden who had shown him what an actor could do to move an audience, and that spoke to him enough to change his childhood ambitions from journalism.

Of course, the movies are changing. For Cage’s latest film, The Humanity Bureau, the producers also shot The Humanity Bureau VRevolution. The challenges of acting for a VR rig were ones that Cage wasn’t sure he’d really conquered. He considers part of his skill to be flirting with the camera, building a relationship between himself and his audience. With a VR rig, he hasn’t yet mastered flirting with multiple lenses.

Still, he recognizes that acting for VR is a set of skills all actors need to develop. Pizarro noted that it feels like we’re on the cusp of what it must have been like when sound films were taking over from silents. Chris Coppola agreed, adding that story is still the most important thing. Otherwise, we’re just plugging in, not really getting engaged.

Whether he means to or not, Cage himself is definitely part of that being plugged in. Though not on social media himself, he was asked how he felt about being the subject of so many memes. He laughed and said that he doesn’t get it, but hey, go for it.

If there’s one thing that Cage’s career attests to, it’s the power of going for it. And I look forward to whatever he goes for next.