Once upon a time, a DC Comics house ad featured a gaunt, white-faced character with dark eyes glittering. He promised that he would show us terror in a handful of dust. With that boast, fans got their first exposure to a book that would help launch a new age in comics. Along with Alan Moore’s Swamp Thing, Neil Gaiman‘s The Sandman paved the way for Vertigo Comics. When Gaiman ended the series, it was with the understanding that DC Comics would not use its characters without his involvement, or at least approval. So the inhabitants of the Dreaming have rarely appeared in the last couple of decades — but that’s about to change, just in time for the 30th anniversary of The Sandman.

Announced in Entertainment Weekly and launching in August, Gaiman and DC Comics are about to unleash The Sandman Universe. In concept, it’s a line similar to what Gerard Way is doing with Young Animal, creating a sub-imprint with one mind “curating” it, but with several creators contributing. A one-shot called The Sandman Universe will get readers up to speed: Dream has gone missing (presumably Daniel, the replacement for Morpheus), a rift has opened between the Dreaming and a mysterious new realm, and a book has disappeared from the Library of Unwritten Books and landed in the hands of children in the waking world. And there’s a new House alongside those of Mystery and Secrets: the House of Whispers. (No love for the House of Weirdness.)

Gaiman will plot the one-shot, while writers Nalo Hopkinson, Kat Howard, Si Spurrier, and Dan Watters will script. Bilquis Everly draws the interiors, while Jae Lee provides the cover. The writers will then go on to the individual books spinning out of this:

The artists have not been announced yet, but there’s no doubt they will be top tier. And that’s no dream. 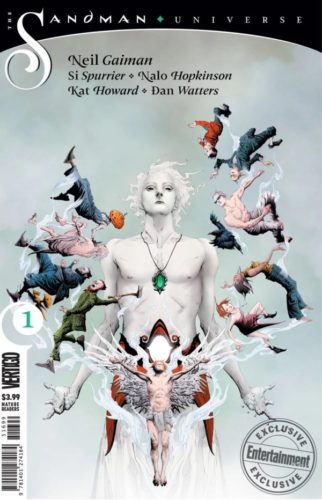